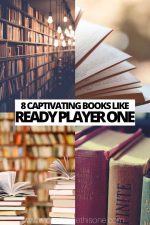 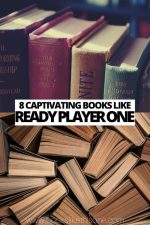 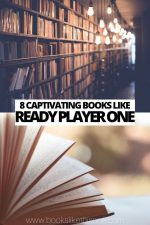 If you’re looking for books like Ready Player One, you’re not alone. Ernest Cline’s debut novel was published in 2011 and has remained at the top of many reading lists since. The story of Wade Watts questing to find hidden ‘Easter eggs’ within the virtual world of ‘The Oasis’, captured the imagination of millions. In part, this was due to the story’s clever blend of ’80s nostalgia and video games.

The Steven Spielberg film adaptation was solid, but it could never hope to capture all the nuances and in-jokes the book is filled with. If you’ve already read and re-read Ready Player One, then there are other books like it that you can devour.

Books like Ready Player One have been popular for a long time. Warcross taps into a similar cocktail of nerd-nostalgia as 18 year old bounty hunter Emika Chen glitches herself into a live match of the biggest internet game in the world – Warcross.

Players access the game via the ‘Neuro Link’ (similar to the glasses Wade has at the beginning of Ready Player One) where they battle to take their opponent’s gems in order to win. Following her hack, Emika is offered a job by the game’s creator leading the reader down a fun rabbit warren of murky motives and twists – some surprising, some not-so-surprising.

Warcross is immensely enjoyable and I can already sense a future film adaptation on the horizon. Similar yet different to Ready Player One, you can’t help but get behind Emika as she battles through matches, drawing closer to the truth of the game.

On the surface, books like Ready Player One can appear derivative or clichéd. You could even argue that this whole sub-genre is derivative. Then along comes a book like Arena. Protagonist, Kali, competes in the virtual RAGE tournaments where gamers fight to the digital death (imagine Mortal Kombat vs. Street Fighter mixed with Call of Duty and Fortnite).

Kali is the first female captain in the game’s history but is thrust into uncovering the murky side of RAGE when her teammate and lover dies from a drug overdose. Jennings is a life-long gaming fan and it shows. With virtual tournaments now a huge industry in of themselves (YouTube them and you’ll see what I mean), Jennings admirably tackles the real-world issues of drug abuse and corruption that have infected many sections of the gaming industry.

Arena is equal to Ready Player One because it is not only believable and fun, it forces you to look at the darker sides of gaming.

I was 12 years old when Snow Crash was first published. I have read similar titles to Ready Player One but none have made me think of language in the manner Stephenson does here.

Set in a future Los Angeles after the global economy has tanked, the US federal government has ceded virtually all power to private organisations and commercial entities. Protagonist, Hiro, is a pizza delivery driver for the Mafia. He is also a hacker. When trying (and failing) to make a delivery on time he meets Y.T. a skateboard courier who does the delivery for Hiro. The two soon strike up a partnership; gather intelligence and sell it to the CIC (what’s left of the CIA).

Things begin to go awry when Hiro is offered a data-file called ‘Snowcrash’ – a potentially deadly neuro-linguistic virus. Hiro’s world soon begins to unravel as the file’s connection to Sumerian culture and the Tower of Babylon emerges.

Snow Crash is a fantastically absorbing take on how our linguistic evolution could have been the result of an ancient culture wanting to re-program the human mind to do what they wanted.

I read this twice within a year because it was so interesting and entertaining. If you’re a fan of Ready Player One, you’ll want to do the same.

Where better to look for books like Ready Player One than with the author himself? Armada was published in 2015 and is not as well-known as Cline’s earlier success. This is a shame, as the plot is just as much fun and arguably more ingrained within videogame culture.

Zack Lightman is idly looking out the window of his high school classroom when he sees a ship hovering outside. The ship looks exactly like a ship from his favourite online video game, Armada. Returning home to look through his missing father’s notebooks, Zack chances upon a conspiracy theory – maybe Armada isn’t a game after all. This book flies along at a really good pace and films like The Last Starfighter (almost identical plot) Flight of the Navigator and Star Wars all readily come to mind.

Zack is a likeable protagonist and has a colourful array of interesting characters to accompany him on his journey to fight the aliens and defend the earth. Whilst a sequel to Armada is teased towards the end of the book, at the time of writing a further instalment is yet to materialise.

One Con Glory, by Sarah Kuhn

I was (and remain) a fan of Buffy the Vampire Slayer. Some elements of the show have aged poorly. However the core premise of an ordinary girl chosen to be the ‘slayer’, a lone warrior destined to fight the vampires, the demons and the forces of darkness, still resonates for me. It clearly resonated for Sarah Kuhn too in her tale of Julie, a die-hard Buffy fan and all-round loner geek girl.

For Julie wants nothing more than to get her hands on a forgotten 80s action heroine figure known as ‘Glory Gilmore’, and when the chance presents itself she embarks on a quest to do just that. It would be easy to write off One Con Glory as just another YA geek obsessed nonsense tale, but then you read the book.

Books like Ready Player One often have a protagonist well-versed in geek culture, and Julie is a familiar yet refreshing presence. At turns awkward and dour, you can’t help but be won over by Julie’s enthusiasm and love for all things Buffy, comic-book and video game. In an industry and culture still over-represented by men, One Con Glory is a timely reminder that girls are geeks too.

The Impossible Fortress, by Jason Rekulak

A huge part of the success of Ready Player One was the nostalgic ’80s references. The Impossible Fortress takes things a step further by actually setting the story in 1987.

14-year-old Billy and his two best mates are trying to get their hands on a Playboy issue with Vanna White on the cover. The only place that sells it is Billy’s local convenience store, so the boys hatch a plan to breach the back counter. In doing so Billy meets the shop owner’s daughter, Mary. Discovering she is possibly as big a nerd as he is and shares a love of computer programming, Billy soon realises that there are more things to life then Playboy.

The Impossible Fortress brings to mind films like The Goonies and The Sandlot Kids. Billy’s quest to capture the elusive Playboy gets mixed up with his growing feelings for Mary and misadventures with his mates. Recommended for fans of ’80s nostalgia and general YA readers.

Books like Ready Player One share a common theme: a dystopian future world that people escape by diving into virtual reality. Insignia is set in the middle of World War III so you can’t really get much more dystopian. The story of teenaged gamer Tom Raines as he is recruited to train for the elite combat corps of the Intrasolar Forces is not uniquely original, but it is very well told.

What makes it stand out is the believability of Tom’s character. A vulnerable, fragile and skinny teenager who feels more at home online than in the real world is relatable to millions of teenagers. I remember what I was like as a teenager and the thought of my gaming and general geek skills being seen as assets rather than flaws is appealing.

When Tom realises his gaming skills make him the perfect recruit for the combat corps, it is easy to imagine his joy. Girls becoming interested in you? New cool friends? Unimaginable career opportunities? Yes, please! Of course, as Tom discovers, there’s always a catch.

Insignia is a clever and wholly relatable read for anyone who’s ever felt socially awkward and different to the rest of the world.

The Lives of Tao, by Wesley Chu

Imagine waking up one morning to hear a strange voice in your head? This is exactly what happens to out-of-shape IT technician Roen who naturally assumes he’s losing his mind. Except that he isn’t. Roen now has an alien in his brain. A passenger called Tao, whose race crashed on earth millions of years before humans were even a thing.

Tao needs Roen’s help because the aliens have split into two opposing factions and have been fighting a civil war for centuries. Pulled into a tale of alien espionage Roen has no choice but to try and be a sort of 007-type secret agent.

But of course things are never what they seem and Roen struggles to come to terms with what his life is becoming. The Lives of Tao is fun and was the result of an ‘open door’ submission policy at Angry Robot books (a publisher that has published Kameron Hurley among others).

The banter between Tao and Roen is utterly believable and at times very funny. The pace is fast and rarely drops to allow Roen (or the reader) to breathe. Perhaps the most admirable thing about this book though is the way it gently helps a reader empathise with mental health conditions. Schizophrenia is often thought of in a negative context thanks to irresponsible media reporting.

In The Lives of Tao, the reader is invited to imagine what your life might be like if you suddenly had another voice (or several) suddenly invade your mind.

There are so many books like Ready Player One waiting to be discovered. These are just some of our top choices, but as always we’d be delighted to hear what you think? Do you agree with our list or have we missed a title you think deserves inclusion?

Are you looking for more books like Ready Player One? Let us know in the comments! 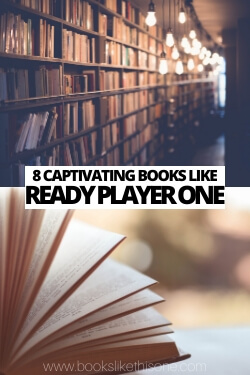