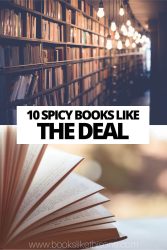 If you love reading about strict “only physical, no strings attached” deals that may turn into true love, then you will love the following list of books like The Deal.

In the first book of the Off-Campus series, we get to know more about Hannah and Garrett who seem to be total opposites.

The two make a deal where Hannah has to tutor Garrett in exchange for lessons in dating and help with making her crush jealous. It appears to be a straightforward deal, but after a few kisses that lead to more, Garrett needs to figure out how to show Hannah that he’s the right guy for her.

The Chase, by Elle Kennedy

Part of the Briar U series by the same author as The Deal, The Chase follows the rocky relationship between Summer and Colin.

Summer has had a crush on the mysterious Colin, aka Fitzy, ever since she met him. She doesn’t understand why she’s so attracted to a guy who is nothing like her type and who wants nothing to do with her, but she is determined to see if his whole body is really covered up with tattoos.

Fitzy is the new Briar hockey team captain and knows the responsibilities that come with it. He also knows he needs to stay away from his friend’s little sister but that might be harder to do when she moves into his house which he shares with two other roommates.

Living together might complicate things even more but it can also magnify the excitement of the chase.

A Favor for a Favor, by Helena Hunting

It hasn’t always been easy for Stevie to be the sister of an NHL player but it does come with its perks like a penthouse to run away to when she finds her boyfriend cheating.

However, it also comes with a rude but very attractive neighbour who gives her attitude from the first night.

At least she can look forward to her new physiotherapy job and new friends. It also helps that she has a little silent competition going with her neighbour where they pick up their newspaper in underwear.

Things change when she finds out the neighbour is a teammate of her brother and now that he got injured, she offers to help him with extra physiotherapy sessions. This will help him get back on the ice sooner and gives her a professional athlete as a reference.

The start of Stevie and Bishop’s relationship with a favour is similar to Hannah and Garrett in books like The Deal, as well as the hockey aspect to it.

But will they both be able to keep it professional or maybe A Favor for A Favor can open up the door to much more.

In The Kiss Quotient, Stella is on the Autism Spectrum and while she lives and breathes math, she has trouble actually living a fulfilling life.

Since she doesn’t know the first thing about dating, she decides to hire a professional escort to teach her everything there is to know so she can start to date well prepared.

Michael has been escorting only to be able to help his family, but even though he needs the money he decides to help Stella so that no one else can potentially take advantage of her kindness and innocence.

Similar to books like The Deal, Stella and Michael’s deal starts as a way to help Stella complete her checklist of things she wants to learn about dating but when the two get to truly know each other then the feelings are unavoidable.

Having grown up rich thanks to a Hollywood producer for a stepdad, Piper has everything she wants without having to work for it.

Until the day her longest relationship of three weeks comes to an end and she decides to break into a fancy hotel to throw the biggest pool party of the year.

The party is successful in making people forget about the public break-up by giving them the topic of Piper’s arrest to gossip about.

This was the last straw for her, and her stepdad sends her to her mom’s hometown, and where her birth father died, to learn to value money and find a passion other than partying.

Luckily, Piper’s younger sister accompanies her and after a few days of moping, they decide to fix up their father’s bar. There she also meets the grumpy but hot captain who isn’t falling for her charm but Piper is up for the challenge.

Soon she might start seeing the world differently but she risks falling in love with more than just the small town of Westport and It Happened One Summer.

Since moving away from her hometown for college, Abby has done everything to erase her past and to become a new Abby in Beautiful Disaster.

But Travis, the king of one-night stands, won’t make it easy for her. The more she tries to avoid him the more he will do what he can to get her attention.

After a bet between the two, resulting in Travis winning, Abby will have to pay up and move in with him for a month.

While their friendship brings them closer together and it seems they’ve both met their match, like in books similar to The Deal, Abby will have to decide whether their potential love story is worth jeopardising her new start.

In The Spanish Love Deception, Catalina has worked her butt off to get to where she’s at in her career and to be taken seriously.

After a bad breakup, she leaves Spain to start over in New York, but somehow her past mistakes continue to hunt her.

Now that her sister is getting married, Lina knows she can’t attend the wedding alone. But she also hasn’t made any time to date and she let it slip to her mom that she’s taking her very serious boyfriend.

To her surprise, her office rival offers to be her date if she returns the favour by also attending an event with him. Out of options, she agrees to the deal.

Little does she know she will get much more out of the arrangement than she could have dreamed of, but will she be ready to let love in?

In When Sparks Fly, Avery is running the family hotel with her sister where they also host events, like the surprisingly popular hobbyhorse competitions.

After a car accident that leaves Avery immobile for months, she has to learn to slow down and trust others with her responsibilities. She also has to lean on her best friend and roommate, now caretaker, Declan.

Avery starts to see a different side of Declan and the more time they spend together the more they drift away from the friend zone. So much so, that Declan offers to help Avery with more than just washing her hair.

Some bedroom action leads to a change in their friendship and a chance for love. But when someone from their past comes into the picture, it could ruin their whole relationship and the years they’ve worked to build it.

Falling for the Groomsman, by Diane Alberts

Just like Hannah in The Deal, Christine is ready to cross things off her naughty list at her best friend’s wedding.

Her plan to have fun with one of the groomsmen quickly changes when she bumps into the guy who took her virginity and who happens to be the bride’s brother.

When she lost her virginity, Christine had declared it to be the best night of her life until Tyler ran away right after and she didn’t even get a “goodbye.” Now, many years later, she finally gets to plan and execute her revenge.

However, in her plan to seduce Tyler, Christine might end up Falling for the Groomsman and he might also be wanting more.

Simmer Down, by Sarah Smith

After giving up her dream job to move to Maui and help out her mom with her family’s Filipino food truck, Nikki had no idea what she was getting herself into or how vicious the competition would be.

While she tries her best to ignore the rude British man who decided to set up his truck next to their spot, it’s hard not to get distracted by his pretty face, even when he’s raising his voice at her.

When their feud goes public, they both notice how their rivalry has attracted more customers for both of their food trucks, so they decide to Simmer Down and work together.

Nikki and Callum make a deal that whoever sells more during the Maui Food Festival will be able to keep the beach parking spot.

As they spend more time together and let their guards down, the pair might be ready to call it a truce. But will Nikki be able to trust Calum with her heart?

The Impact of You, by Kendall Ryan

Just like Hannah, and other similar characters in books like The Deal, Avery needed to escape her past so she decides to go away for college to where nobody will know her.

While her plan to keep to herself doesn’t include falling for a frat boy, she can’t stay away from Jase and it seems that their attraction is mutual.

Jase is known for sleeping around and drinking a lot but now with Avery in his life he wants to be a better person for her. He also wants to find out what she’s trying to keep a secret so he can help her overcome any issues or pain.

When Jase finally finds out the truth, will his love for Avery be enough to save them both in The Impact of You?

As we learned from books similar to The Deal, what can start with just a simple deal that is meant to benefit both parties involved has the potential to spark so much more. If you like the enemies-to-lovers stories that start with a deal and lead to steamy moments then you will love books like The Deal.

Are you searching for more books like The Deal? Have any recommendations that didn’t make the list? Let us know in the comments! 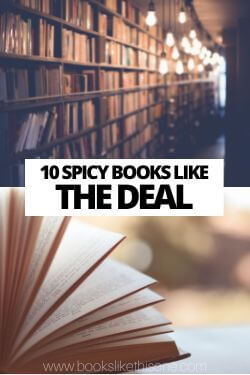