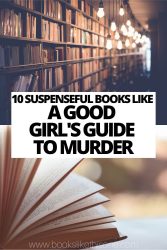 For those needing a good mystery, this list of books like A Good Girl’s Guide to Murder will deliver with lots of twists until you get the full truth.

In the book, Pippa decides on a closed murder case for her final project in school. While the whole town and police believed that Sal Singh killed Andie Bell, Pippa has always questioned it and she wants to find out for herself.

The more Pippa digs, the more she finds, but whoever the real killer is doesn’t like her getting closer to the truth. Nevertheless, Pippa won’t be scared off.

One of Us Is Lying, by Karen M. McManus

When one student has a deathly allergic reaction in detention, all fingers point to the other four students who were present.

Simon, who suffered this tragic death, was responsible for creating and running a gossip app that reported on every dirty secret anyone at the school had. So it was possible that most people wanted him gone but only four could’ve done it.

The police turn to the main suspects Bronwyn, Addy, Nate and Cooper since they were not only in the same room as Simon but they were about to have secrets exposed the next day on the app.

Similar to books like A Good Girl’s Guide to Murder, all the proof conveniently points to a person or group without leaving room for other suspects.

Now the four will have to prove their innocence and try to find the real killer while also figuring out if they can trust one another in One of Us Is Lying.

Have you already read this novel? Check out our list of books like One of Us is Lying!

The Paris Apartment, by Lucy Foley

In The Paris Apartment, Jess is trying to run away from a bad situation and wants a fresh start far away from her old life. So luckily, when she asks her half-brother if she can come and stay with him in Paris, he agrees even though it sounds like it wasn’t a good time for visits.

The night Jess arrives, her brother doesn’t let her in or pick up the phone, and when she sneaks her way into his apartment he’s nowhere to be found.

When she still doesn’t hear back from him the next day, Jess starts to worry because Ben would never just leave when he knew she was coming and there’s also the issue with his cat being left alone.

Ben’s neighbours aren’t much help and it’s quickly clear that they’re all hiding something. It’s up to Jess to figure out what happened to her brother and which of these people had something to do with it.

My Killer Vacation, by Tessa Bailey

After saving up enough money, Taylor planned a well-deserved beach vacation for herself and her brother, but when they arrive at the rental house in Cape Cod, it’s not at all what they imagined – for one, they find a dead body in the laundry room.

Her whole life, Taylor has been seen as fragile and as someone who runs away from danger, but when she doesn’t break down after seeing the dead guy, she believes she can help solve the crime.

But she’ll have to work with the hired bounty hunter, Myles, who isn’t a big fan of her at first. He will quickly realise she can be more helpful than he gives her credit for and it doesn’t hurt that he’s very attracted to her.

Similar to books like A Good Girl’s Guide to Murder, a teacher doesn’t seem like the ideal crime-solver but it does help that Taylor sees things some people would miss.

The two must learn to work together while trying to keep it professional but there are no promises that lines won’t be crossed in My Killer Vacation.

I Am Not Your Perfect Mexican Daughter, by Erika L. Sanchez

After her older sister Olga’s death, Julia feels the pressure to step up and be the perfect daughter like her sister but she has no idea how to or whether she even wants to.

When Julia looks through Olga’s room, she finds things that go against who her sister presented herself to be. It turns out Olga had a secret life and Julia thinks it might have something to do with her death, so she starts digging into it.

Similar to Pippa in A Good Girl’s Guide to Murder, Julia is in high school and people underestimate her which doesn’t stop her from getting to the truth.

While there are some heartbreaking moments in I Am Not Your Perfect Mexican Daughter, the truth will provide Julia the hope and clarity she needs to move forward.

I Am Watching You, by Teresa Driscoll

I Am Watching You is about a girl named Anna who goes missing and the story is told from the perspective of the last people who saw her.

Ella was on the same train as Anna and her friend Sarah. She had an inner battle to say something when the girls started talking to two men who were recently released from jail, but she cared more about not seeming nosy.

Now Ella has to live with the guilt of not having spoken up and fear after receiving threatening letters around the anniversary of Anna’s disappearance.

But this time she will take action and hires a private investigator to find the person sending her the letters in hopes of also finding the person responsible for taking Anna.

Books similar to A Good Girl’s Guide to Murder might leave some people with hope to find the victim alive when a body hasn’t been found but sometimes it may not turn out how you wish it would.

When Jane and her son moved to Pirriwee she didn’t expect to make friends so quickly but the friendly yet bossy Madeline sought to include her in her close friend group with Celeste.

The three mums have children in the same class and when another mum starts accusing Jane’s son of choking her daughter, Madeline and Celeste stand behind Jane.

As the three mums become closer friends, they start to share dark secrets and realise they may have a stronger connection to each other from times before they all met.

While life on the coast of Australia might appear blissful, there are so many lies that intertwine. Big Little Lies will find a way of coming out, even if someone ends up dead.

Casey has worked for the home-makeover married couple Rusty and Melissa Tripps for about a decade before they were famous, and she has even had a hand in that success – although she hasn’t been rightfully acknowledged for it.

On their show and in public, the Tripps seem like the perfect pair but in private they can’t even stand being in the same room. On top of the show, the two are starting their book tour, promoting the book on their “perfect” marriage but they need Casey and James, their assistants, to keep them in line.

However, when the book flashes forward to a transcribed police interview, it will leave you itching to know why there’s a house on fire, who started it and who comes out of it alive in The Honey-Don’t List.

Everyone in Rosewood has a secret, especially the four Pretty Little Liars Spencer, Hanna, Aria and Emily, but who would kill to keep the secrets hidden?

The first book in the series starts with the four friends trying to figure out where they fit in after their friend, and glue of the group, Alison goes missing. That is until her body is found.

At the service of Alison’s funeral, the four girls start to receive threatening messages from “A” and they must stay together to find out who the person is while doing whatever they can to stop their secrets from coming out.

When Amy goes missing on the fifth anniversary of her wedding, all signs point to her husband Nick being involved.

Nick swears to be innocent but while the police are building a case against him he needs to figure out what really happened to Amy before he is arrested.

Similar to books like A Good Girl’s Guide to Murder, the crime scene evidence in Gone Girl seems to provide an obvious suspect but when you look closely you will see that there’s much more to the story.

As we hear both Nick’s and Amy’s sides, through her diary entries, more questions will come from their stories, but who is telling the truth?

All Your Twisted Secrets, Diana Urban

Six students are selected for a scholarship and invited to dine with the Mayor, but only five or maybe none of them will come out of it alive in All Your Twisted Secrets.

When the selected six all arrive at the dinner, they are surprised to find nobody else there but the six of them. Their surprise turns into fear when someone locks them into the room.

Then when they notice some food alongside a syringe filled with an unknown poison, a bomb with a countdown and a note ordering them to pick one person to die or they all die, they know they’re in trouble.

As the six try not to panic and look around for any way out, they also try to come up with a connection between all of them. There’s a valedictorian, an athlete, a queen bee, a music geek, a loner and a stoner.

Similar to books like A Good Girl’s Guide to Murder, the chapters alternate from the present to the past, as the students try to figure out who would want them dead.

In the process of finding a solution, as the clock keeps ticking the six have to decide who they will choose to kill if they really have to.

If you love a great page-turner with twists that keep you at the edge of your seat, then you will find just what you need from this list of books similar to A Good Girl’s Guide to Murder. Who knows, you might be ready to solve your own crime.

Are you searching for more books like A Good Girl’s Guide to Murder? Have any recommendations that didn’t make the list? Let us know in the comments! 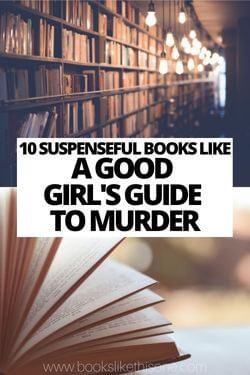