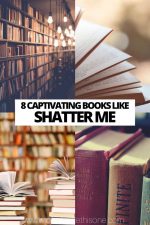 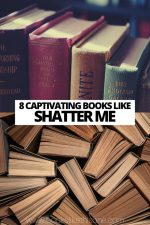 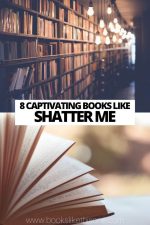 On the hunt for more books like Shatter Me?

There’s something about romance that really appeals to young adult readers. Perhaps because more then any of us, young adults are navigating their tentative first steps through romantic relationships. Shatter Me filled a burning need no one in the publishing industry knew was there; romantic dystopian fantasy.

Mafi’s writing is… bonkers. The style is almost journalistic with whole sentences crossed out. Like a first draft that hasn’t been edited yet. But that’s the point. Whilst Shatter Me does grate in some places, in others it works! The story of Juliette, a girl who can’t touch or be touched without accidentally killing people, piqued my curiosity.

If you’ve already read it though, here are some books like Shatter Me that might hold your interest.

Shadow and Bone, by Leigh Bardugo

Books like Shatter Me mostly deal with a young female protagonist that has special abilities. In Shadow and Bone, Alina Starkov discovers a power she then uses to save her best friend when they are brutally attacked. Naturally, Alina is taken to train under an elite magical squad known as the Grisha.

But nothing is as it seems, and with a looming darkness known as the Shadow Fold threatening the land, Alina has to discover secrets and confront monsters within and without. Alina’s world is one of the most interesting things about this story. The horrible creeping darkness that crawls across the land spitting out monsters and more is very effective.

Whilst the story does contain a ‘boarding school’ trope often used in other YA novels, Bardugo’s writing is easy to follow and the characters interesting enough to hold your attention. Worth a read if you liked Shatter Me.

Under the Never Sky, by Veronica Rossi

Another similar title to Shatter Me, Under the Never Sky has an easier style to read. Technically a dystopian science fiction novel, it can still be classed as YA due to the age of the protagonists.

Aria has lived under the protective dome of Reverie her whole life, but when her mother goes missing, Aria sets off to find her outside. Things heat up when she meets Perry, a wild savage also looking for someone.

A mix of interesting world-building, (just what is the Aether? It’s never explained but that makes it more fascinating) and likeable characters make Under the Never Sky a worthwhile read. Some of the romantic elements are a bit nauseating, but for younger readers, perfectly pitched to sweep fans away.

Books like Shatter Me come pre-loaded with certain expectations; romance, fantasy, science fiction, dystopian setting. Cinder meets all these and more. A re-telling of Cinderella set in the future, where cyborgs are common and a mysterious threat hides on the moon waiting to make its move on planet earth.

Cinder is a cyborg herself but has more agency than the original fairy tale character she’s based on. For a start, Cinder is a gifted mechanic and despite being treated as a second class citizen, does more than just marry a handsome prince.

The fate of the world rests on her shoulders, and in this genre, it’s nice to see a female protagonist not just fall in love with the upper-class prince charming and live happily ever after. In this future, the world is harsh, the stakes high, but Cinder is a smart and resourceful hero.

Storm and Silence, by Robert Thier

There aren’t many books like Shatter Me set in the past. Storm and Silence takes us back in time to 19th century London, complete with its gritty dour atmosphere. Lilly Linton is our protagonist and she wants more than to just marry and have children. Lilly wants freedom, but in Victorian times, that’s not really an option for women.

Enter Mr Rikkard Ambrose, a powerful figure in the British Empire who gives Lilly a job as his secretary. This is a book of interesting conflicts. On the one hand, Lilly craves the freedom to choose her own life. She wants women to have the vote, to be heard and treated as equals. Yet she can’t help but be gradually attracted to Ambrose.

It might feel easy to give up and close the book at this point, but something about the narrative kept me reading and that something was the characters. Lilly and Rikkard Ambrose are memorable.

I don’t agree with all of Lilly’s choices, and Ambrose is, essentially, an egotistical mean spirited miser. Yet both have vulnerabilities amidst their struggle for control. Thier has stuck a suffragette next to a chauvinist making their interactions explosive and highly readable.

A Court of Thorns and Roses, by Sarah J. Maas

From Victorian England to faeries and magic, books like Shatter Me swim with romance and the supernatural.

A Court of Thorns and Roses is a great escape from real-world gloom. Feyre is taken to a magical kingdom to be tried for the murder of a faerie. Whilst there she begins to understand there is more to her captor than meets the eye (or his green eyes in this case).

As her feelings for him change, Feyre finds herself on a quest to break an ancient curse before she loses something she’s come to love. At first, this feels like just another fairy tale fantasy romance, but as you read further there is more depth to be found. Some of the faeries are just plain nasty; backstabbing politicians who will do anything to gain power.

Feyre herself is not just another swooning girl waiting to be rescued; she’s a hunter and an artist. Tamlin, on the other hand, is a mass of contradictions; cold and hard whilst frightened and vulnerable.

The romance doesn’t overwhelm everything, and whilst this is perhaps another re-telling of Beauty and the Beast, it is more sophisticated and nuanced.

Already read this book? Check out our list of more books like A Court of Thorns and Roses!

I have already written about Legend, but it is worth mentioning here as it shares traits with Shatter Me. The autocratic Republic is constantly at war with neighbouring countries, operating a segregated societal structure with elite families at the top and the slums at the bottom.

June and Day are respectively from the top and bottom. Two people who would never meet were it not for the murder of June’s brother, Metias. What follows is a game of cat and mouse as June seeks revenge against Day, but Day is not the suspect she thinks he is. It is easy to see why this novel has done so well.

With the United States in a seizure of turmoil at this time of writing, the deceptions and outright refusal to accept facts are everywhere throughout Legend. Lu is writing from experience, and it shows. Well worth a read.

The Darkest Minds, by Alexandra Bracken

High stakes and strange abilities are sprinkled liberally throughout books like Shatter Me. The Darkest Minds is another enjoyable dystopian-esque tale of a girl suddenly developing strange and frightening abilities.

Ruby’s abilities get her sent to a government ‘rehabilitation camp’ before she manages to break out. The rest of the tale takes place with Ruby on the run and linking up with other kids who have these strange abilities.

The Darkest Minds was published in 2012 at the height of the dystopian fiction craze, so it is understandable that readers today might have missed it. It is worth checking out.

The depiction of concentration camps is very visceral and frightening. A reminder of how easy it is to denigrate an entire group of people based purely on differences we fear because we don’t understand. Psychic abilities aren’t new in fantasy and supernatural fiction, but they are used to great effect here.

Readers of Clare’s work will already be on familiar territory as this is a prequel to the Mortal Instruments series. However, Clockwork Angel is comparable to Shatter Me and other books like it.

Set in 1878, the story follows Tessa Gray as she descends into London’s dark supernatural underworld looking for her brother. She soon bumps into Shadowhunters, and they set off in facing down a terrifying army of clockwork creatures under the control of an alliance of warlocks, vampires and demons.

What works here, is Tessa. It’s hard to engage with a story without characters you can engage with. Tessa’s internal conflict over whether or not she is human is relatable to anyone who’s ever felt different or out of place.

Bigotry, racism and love all twirl together in a fantasy setting that readers who snub fantasy would do well to pay attention to. Another example of how books like Shatter Me often reveal contemporary truths we don’t want to confront.

Shatter Me is a book that takes some risks with the writing, but it pays off. Books like it share similar themes and stakes. The novels above are just some of our recommendations, but rest assured there are many other books other tales waiting to tug at your emotions and hunger for fantasy.

Are you looking for more novels like Shatter Me? Have any recommendations that didn’t make the list? Let us know in the comments! 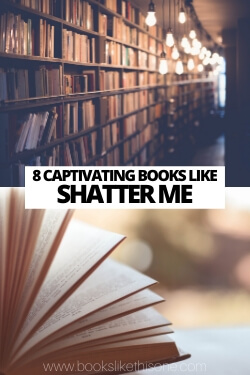