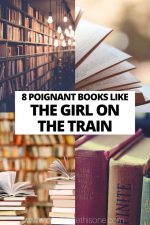 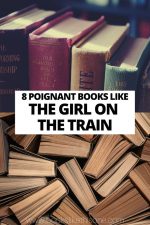 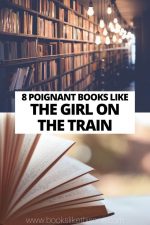 Paula Hawkins’ 2015 psychological thriller sold massively well leaving many people looking for more books like The Girl on the Train.

The novel follows the couple Megan and Scott, who live along a train line, unknowingly being watched every morning by Rachel on her commute to work.

However, the mystery works so well because Rachel, the narrator for the majority of the novel, is an alcoholic, and her memories are often not to be trusted, or simply not there at all, as she faces a major blackout on the same night that Megan has gone missing.

All the below novels deal with the devastating repercussions of alcoholism or addiction in one form or another; in these books similiar toThe Girl on the Train, often you are left with mixed feelings about the protagonist and their choices.

The Shining, by Stephen King

The Shining is a classic horror novel – a man and his family move to a remote hotel in Colorado in order for him to take up the position of caretaker, whilst he also tries to work on his novel.

Jack Torrance is a recovering alcoholic, and subject to relapses, having had to move away from their previous home due to his fits of anger and extreme violence. Unbeknownst to him, his five-year-old son Danny has a gift, a gift called “the shining,” where he is able to see and interact with the dead residents of the Overlook Hotel, and where he can slowly see their influence taking hold of his father.

With Jack possessed, Danny and his mother are in danger, and soon they find their lives in mortal peril. Like The Girl on the Train, there is a mystery to this novel although it is supernatural.

However, both novels delve into the dangers of alcoholism – Rachel fears in one of her blackouts that she could, in fact, be capable of murder, while Jack loses his teaching job for attacking a student.

The Wolf of Wall Street, by Jordan Belfort

This is a piece of non-fiction, although sometimes that is hard to believe. Jordan Belfort tells the story of how he became one of the richest men in New York City, and the copious amounts of alcohol and drugs he used to maintain this lifestyle.

Jordan moves to NYC in order to work on Wall Street, but with the crash of ’87, he finds himself jobless, leading him to work for a much smaller company. Here he learns how to trick poor people out of their money, taking home larger profits than ever before, allowing him to open his own company, Stratton Oakmont.

Soon, Jordan has more money than he knows what to do with, leading him into a life of excess and greed. It isn’t long before Wall Street turns Jordan from a man who wants to make a nice living into an alcoholic whose greed becomes his downfall, as there are several alarming scenes in this novel where his addiction to drugs and alcohol have devastating effects for himself, his friends and his family.

With more in common than just their first names, this Rachel in Rachel Holiday is addicted to recreational drugs instead of alcohol. Whilst living in Manhattan, Rachel allows herself to overdo everything, finally landing herself in isolation from friends and losing her boyfriend Luke.

Eventually, she agrees to return to Ireland and enter into a rehab facility, believing it will be more of a “holiday” than hard work. This novel, like many of Marian Keyes’ books, has a comedic element to it, but there are several scenes that are serious and heart-wrenching, as Rachel realises she needs more help than she thought.

Just as in novels like The Girl on the Train, the protagonist tries to recover from her addiction but hits many speedbumps and we as the readers keep our fingers crossed she’ll be successful, although the stakes are very different in both novels.

Perhaps the most like The Girl on the Train, Gillian Flynn also creates a protagonist who is not only an alcoholic but desperately trying to solve a case, just like Rachel, in Sharp Objects. Camille Preaker returns to her hometown of Wind Gap in order to try and write an article about the girls who have been disappearing in town.

She stays with her estranged mother and stepfather and half-sister, and finds that her presence is not entirely welcome, nor does she wish to be there.

For years Camille’s only solace has been drinking, as she’s tried to give up one of her other coping mechanisms, and this often leads to her memories being skewed about current and past events. A must-read if you liked The Girl on the Train.

The highly anticipated sequel to The Shining, Doctor Sleep follows Danny all grown up and facing the demons of his past. Finding it difficult to deal with the trauma of his childhood, and the horrors he faced at the Overlook Hotel, Danny takes to alcohol just as his father once did, and is disgusted with himself because of it, concerned that he will end up violent and possessed, just like his dad.

This novel is more about an alcoholic’s recovery, as Danny fights his urge to drink in order to become a better man and use his gift of the shining to help another person who has it, and more powerfully, a preteen girl called Abra.

Just as in novels like The Girl on the Train, we watch as our protagonist tries to recover from their addiction in order to do good and repent from their past failures.

The Strange Case of Dr Jekyll and Mr Hyde, by Robert Louis Stephenson

The Strange Case of Dr Jekyll and Mr Hyde is a classic gothic tale about a man who is split in two, the good and kind Dr Jekyll, and the violent and evil Mr Hyde. A man called Utterson begins to investigate when people begin reporting violent happenings involving a man called Edward Hyde.

Hyde is able to provide compensation for his actions with a cheque, but Utterson grows concerned, knowing that the person who has signed for it is a good friend of his, Dr Jekyll. This tale is about alcoholism metaphorically more than literally – later in the novella, it is discovered that Dr Jekyll and Mr Hyde are one and the same, and while Hyde cannot be in control while he is Jekyll, Jekyll cannot be in control while he is Hyde.

Similarly to The Girl on the Train, Dr Jekyll fears himself when he is Hyde, just as Rachel fears what she is capable of when she drinks. Both novels depict the damage of this syndrome, of being two people at once.

Jean Rhys, who was known to drink heavily when she was writing, often writes about protagonists who rely on alcohol. This novel is about a woman called Sasha who has just returned to Paris.

Sasha is self-medicating to escape the horrors of her past and through her, Rhys depicts the difficulties of dealing with past trauma, in a similar way to how Hawkins shows this through Rachel in The Girl on the Train.

Rhys is a master when it comes to the trials and tribulations of women, the traumas they face, and if you liked how this is dealt with in The Girl on the Train, you’ll enjoy reading Good Morning Midnight, even though it is desperately sad in parts.

The Tenant of Wildfell Hall, by Anne Bronte

The final novel of perhaps the least known of the Bronte sisters, The Tenant of Wildfell Hall follows Helen, a widow who moves to Wildfell Hall. The novel focuses on Helen’s relationship with her late husband Arthur. Their relationship turns out to be tumultuous, with Arthur committing adultery and becoming wildly jealous of his and Helen’s son.

He encourages him to drink, whilst also drinking heavily himself, causing severe problems between himself and Helen. Similarly to The Girl on the Train, this novel examines how marital relationships are tested by the influence of alcohol and adultery in a way that almost seems ahead of its time.

Are you a fan of the Bronte sisters? Check out our lists of books like Wuthering Heights and books like Jane Eyre!

Perhaps one of the most interesting things about The Girl on the Train is how it deals with Rachel’s alcoholism, and how this affects the telling of the story. All the novels on this list delve into the struggles with addiction and the harm this can do to the people surrounding the one that is addicted. They brutally depict the blunt truths about alcoholism and other addictions, with an honesty that is often startling.

Are you looking for more books like The Girl on the Train? Have any recommendations that didn’t make the list? Let us know in the comments! 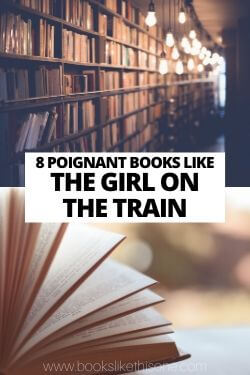