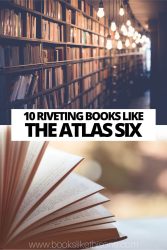 Urban fantasy books like The Atlas Six take us on a journey where a world within our own is unveiled to both the hero and the reader.

The Alexandrian Society is a secret organization comprised of the best magical academicians in the world. The society’s aim is to preserve the knowledge and secrets of the world’s ancient civilizations so they are not lost to time or to the wrong hands.

Members of the Alexandrian Society are promised a life of riches, status and unlimited knowledge, however, becoming a member is a difficult venture.

Only six initiates are recruited every decade from the greatest magicians in the world and after an entire year of vicious tests, only five are recruited… if they survive that long.

A book full of highs and lows, tears and laughter, this book will take you on an adventure like no other. Although, if you have already devoured this one, you may be looking for a book similar to The Atlas Six.

Well, look no further! Read on for ten more books that’ll be sure to catch your fancy.

City of Bones, by Cassandra Clare

City of Bones is the first novel in the bestselling The Mortal Instruments series which has conjured both movies and television shows, this fabulous fantasy adventure set between our world and the world of the Shadowhunters.

We meet Clary Fray, an ordinary girl until she sees something no one else can. Then, when her mother disappears, she finds out she is descended from a line of demon-hunting warriors known as Shadowhunters.

Her mother’s absence is part of a bigger plan, one only Clary and her new friends can stop from unfolding. Our heroine much like the initiates in The Atlas Six, fights to prove herself as a Shadowhunter whilst navigating a new world and trying to find her kidnapped mother.

This is the perfect book like The Atlas Six if you love a good old young adult fantasy series.

A Darker Shade of Magic, by V.E. Schwab

Much like The Atlas Six, A Darker Shade of Magic is set in a world of magicians and spells and all things out of the ordinary.

Kell is one of the last remaining Antari who are magicians with the ability to travel between parallel Londons of Red, Grey, White and, long ago, Black. Kell travels in between the three Londons as a Maresh Empire ambassador of Red London also known as Arnes.

But secretly, he smuggles people between each city which soon, he realizes, will come at a high price. Now, dark magic is causing chaos and to save all of the parallel Londons, Kell will have to first survive.

A wonderful urban fantasy book similar to The Atlas Six, pick this one up for a fabulous adventure.

Scarlett Dragna has wished to participate in the magical, immersive game of Caraval as long as she can remember. So, when her invitation to the game finally arrives, Scarlett and her sister, Tella, jump at the chance to leave her awful father and betrothed.

Upon arrival, however, Tella is kidnapped by the mysterious Legend and the participants of the game are told whoever finds her first will win Caraval. If no one does, she is lost forever.

With her sister’s life depending on her and with no clue who to trust, Scarlett has to navigate Caraval and the people within.

A story of sisterhood, truth and lies, Caraval is the perfect, fun book that’s like The Atlas Six to satisfy your cravings!

In the first novel of Holly Black’s Folk of the Air series, The Cruel Prince, we meet Jude who has lived amongst the fae since she was a young girl after her parents were murdered and Jude and her sisters were taken away to the High Court of Faerie.

Now seventeen and wanting nothing more than to belong in the world she now calls home and amongst the people who reside there, she is looked down upon for her humanity, her mortality – especially by the prince, Cardan.

Jude gets tangled up in political intrigue and spy-like missions in order to win respect amongst her peers but in doing so, uncovers a plot that will destroy all of Faerie.

This dangerous, alluring world will have you devouring this book similar to The Atlas Six!

Zachary Rawlins is an ordinary student at Vermouth University but his ordinary life takes a turn when he picks out a book from the library’s shelves.

At first, the stories are entertaining but soon, when Zachary reads a story taken straight from his own childhood, he realizes something is not quite right.

In his desperation to find out why this book contains a portion of his life; he uncovers various clues that lead him to an ancient library deep below the Earth’s surface.

There he meets both protectors of the library and those who seek to destroy it.

The Starless Sea is a beautifully written story about the magic that words and stories hold is a great replacement for those who want a book similar to The Atlas Six.

Ace of Spades, by Faridah Abike-Iyimide

A book similar to The Atlas Six, Ace of Spades is set at Niveus Private Academy. a school for the rich and the perfect.

Nothing seems to ever be out of place and there is a reputation to uphold. However, an anonymous texter dubbing themselves Aces emerges with the aim of bringing two students’ dark secrets to light.

Musician Devon is thrust into the spotlight after his private photos are leaked and the head girl Chiamaka’s secret of how she came to power is released into the vicious clutches of the school’s students.

Someone is out to get both Devon and Chiamaka and they’re planning something much bigger than simply a high school game.

This mystery thriller story is a great read for those looking for something slightly different to The Atlas Six but still want to read about a competitive educational environment where something dark and mysterious is occurring!

Scythe is set in a world where humanity has figured out the secret to defeating hunger, disease, war and all things alike – even death. But the world still needs to control its population in order for this glorious existence to continue.

To kill is the job of a Scythe who are commanded to kill to keep the peace and control the size of the population.

Citra and Rowan are both unwillingly chosen to apprentice as a Scythe but failing to master the skill may mean their own death.

It is kill or be killed in this dystopian story about corruption in society; pick up this book for a fascinating read!

Much like The Atlas Six, in Ninth House, we meet all sorts of dark magic set within a competitive academic environment. Alex Stern is the sole survivor of a series of brutal and unsolved multiple homicides.

She is offered a place in Yale’s freshman class on the condition she secretly investigates the going ons of its secret society. These societies are dark and twisted, and much deadlier than Alex first thought with their involvement with occult magic and murder.

Yale’s rich and powerful students are much more dangerous than they first look. A thrilling read for those looking for a book like The Atlas Six!

Glass Houses is the first book in the Morganville Vampires series and much like The Atlas Six, is about a secret society hidden within our own world.

Claire Danvers is a college freshman in Morganville, Texas who hates the vicious girls she has to share a dorm with.

So, when an offer to join a house share off-campus pops up, she takes it. The imposing house and her new roommates are all keeping their own secrets themselves and when Claire discovers the town’s darkest, bloodiest secret, she may need her roommates’ help to survive.

Just like The Atlas Six where initiates must go through various tests in order to belong to a community, we meet Tris Prior who belongs to a dystopian Chicago where society is divided into five factions, each of which are dedicated to a different virtue: Candor, Abnegation, Dauntless, Amity and Erudite.

At sixteen, the teenagers must decide which faction they will belong to for the rest of their life, which for Tris means staying with her family or being true to herself.

When testing day comes to see which faction she should be in, something is revealed about herself that could lead to her death.

Keeping this huge secret, Tris chooses her faction and goes under various test to prove her physical and mental endurance. But soon she realizes their society may not be so perfect and underneath, lies and corruption grow.

Divergent is a great classic dystopian book like The Atlas Six to pick up if you haven’t read it yet!

Books like The Atlas Six are full of magic and dark twists and turns that both entertain and thrill readers! I hope you found a book to read on the list above!

Are you looking for more books similar to The Atlas Six? Have any recommendations that didn’t make the list? Let us know in the comments! 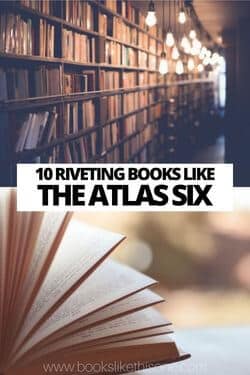