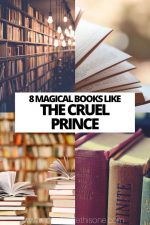 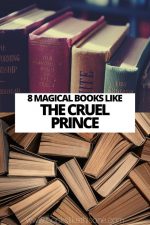 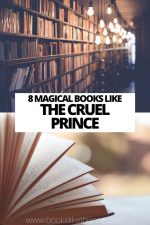 Are you searching for books like The Cruel Prince?

Murdered parents. A High Court of Faerie that is both treacherous and deadly. A human girl desperate to fit in. This is the basic premise of The Cruel Prince, and its simplicity works.

The YA genre is drowning in ‘Twilight’ style romance, so it is nice to read books where the hero has agency beyond trying to get a supernatural being to fall in love with her.

There are some romantic elements to the story that will have older readers rolling their eyes, but as a YA novel, The Cruel Prince has a lot of political intrigue that makes it worth reading. However, if you’ve already read the novel, there are other books like The Cruel Prince flying about, ready to be devoured.

Books like The Cruel Prince sometimes suffer from an overreliance on romance. Not so with Truthwitch. This is a fast-paced fantasy adventure following young witches, Safiya and Iseult, as they do everything they can to stay ahead of the Bloodwitch on their tail.

Why are they being chased? Well, Safiya (Safi) is a rare ‘Truthwitch’, someone who can pull the truth from lies. Her power is sought after, hence the pursuit.

Set in a fierce and colourful world, it has more than a sprinkling of epic fantasy stories to it. Yes, there is a romantic undercurrent, but because it’s never forced to the centre, it feels more natural.

Sarah J. Maas liked this book a lot, and if you’re a YA fan of books like this, you cannot get a better recommendation than that.

House of Earth and Blood, by Sarah J. Maas

Speaking of Sarah J. Maas, it’s hard to find books like The Cruel Prince without this title appearing in your search. Bryce Quinlan’s friends have all been murdered by a demon, and even though the accused is locked up, the crimes start up again, placing Bryce at the heart of an investigation.

When a fallen angel is assigned to help Bryce find the real murderer, a dangerous game of cat and mouse begins along with a simmering romance. This is an entertainingly solid fantasy.

Set in a world where demons and angels walk about like gangsters and thieves, House of Earth and Blood is targeted for the adult market. The plot is more complex than Maas’s earlier books, and whilst the beginning is slow to the point of boredom, this is still an addictive read.

Rebel of the Sands, by Alwyn Hamilton

Desert settings are not used much in books like The Cruel Prince, so Rebel of the Sands is a nice change.

We follow 16-year-old hero Amani Al’Hiza, a quip quoting, gutsy headed young sharpshooter who runs away from home to escape an arranged marriage to her Uncle. One thing leads to another until Amani becomes embroiled in a rebellion against the warmongering sultan.

The setting of this story instantly evokes feelings of dusty magic, middle-eastern fairy tales and legends; a draw for SFF nerds like this humble reader.

Mixing myth with fact, Rebel of the Sands is a fresh and delightful fantasy that will appeal to any fantasy fan, and may even attract readers who wouldn’t ordinarily touch fantasy with a barge pole.

Back to the YA table comes this nasty little fantasy romance, The Shadows Between Us. I say ‘nasty’ because protagonist Alessandra is not the nicest person in this world.

She has a simple goal: marry the Shadow King, kill him and nick his kingdom. She’s not alone in wanting him dead though, which is where her challenge lies.

Books like The Cruel Prince have a habit of making their lead characters wet and in need of rescuing by a (usually) supernatural arsehole. Alessandra is not wet. Alessandra is ambitious and cunning, intelligent and witty. Personally, I feel Alessandra didn’t need a romantic side to her story, and this shows in the way Kallias is not as developed a character.

Nevertheless, it is refreshing to see a twist on the overused YA romance trope and have a lead female who is neither drippy nor in need of rescuing.

You will often find books like The Cruel Prince dabbling in political upheaval, arranged marriages, treachery and of course, romance. Roar ticks three of those boxes.

Aurora Pavan is the sole heir of Pavan and is being groomed to be the perfect queen, but there is a tiny problem: she hasn’t shown any signs of the magic she is supposed to have in order to protect the land.

What’s a worried mother to do? Simple: marry her daughter off to a dark and brooding prince who does possess magic and can be the champion the land needs to keep Pavan safe.

If you’re already yawning and thinking, “sounds like every other YA romance out there”, hold on. Things become far more interesting once Aurora discovers a black market dealing in the magic she needs, and she begins to realise she might not need to be married to a prince after all.

Roar surprised me in a good way by making me think it was a story it wasn’t.

From Blood and Ash, by Jennifer L. Armentrout

If you couldn’t get enough of the ‘will they, or won’t they?’ romantic tension in The Cruel Prince, then you will adore this title from Armentrout, From Blood and Ash. We follow Poppy, a girl chosen from birth to usher in a new era.

Her life has never been her own and she would rather be with the guards fighting back evil than waiting for her day of ascension to a godlike existence. Enter Hawke, a smouldering guard, duty bound to ensure Poppy’s ascension.

You can most likely guess what’s going to happen from here, but that’s not really the point. This is a book guaranteed to provide some light fantasy relief for anyone looking to escape the real world. Comfort food for the romantic fantasy reader.

Books like The Cruel Prince mix history, myth and sometimes science fiction together, blending them into a concoction designed to taste and smell good.

Red Rising mixes genres, giving readers a dollop of science fiction, a dash of history, and a smack of fantasy. The result is a well-written story about a boy’s rise from love-lost slave to the spark of rebellion he instils throughout a decadent future human empire.

Like The Cruel Prince, Red Rising is easy to read. The prose flies off the page, and the action and romantic scenes mesh nicely together. Darrow’s quest for revenge soon turns into something far beyond his control. The end of the book not only completes this phase of his journey in satisfying fashion, it sets him up well for the series.

If ever you need an escape from the very real injustices of our world, Red Rising treats you to a future where the lowest in society rise to tackle the warlords, power mongers and corrupt politicians in a way we sometimes wish we would.

Princess Lira has a collection of 17 human hearts stored in jars in her bedroom. That premise alone was enough to pique my interest. Books like The Cruel Prince sometimes struggle to hook a reader, To Kill a Kingdom is not one of them.

Lira is a sea siren – something you do not see in fantasy much – and after causing the death of one of her fellow sirens, is banished to human form by her mother, the Sea Queen. She can speak, but can no longer sing and will be destined to stay in human form unless she rips the living heart out of a prince before the next solstice.

Enter Prince Elian, a man sent to destroy the sea sirens once and for all. When he rescues Lira from the sea, their developing relationship complicates matters. I didn’t want to like To Kill a Kingdom. At first, it seemed too similar to YA stories I’d read before, but this is an engaging novel because of the strong characters.

Lira and Elian are not Bella and Edward. They have multi-dimensional facets and have many transitions throughout the story. Well worth a read.

The Cruel Prince mixes political intrigue, romance and fantasy in fun and interesting ways. Similar themes are found throughout all the books mentioned. However, these are not the only similar titles available.

Are you looking for more books like The Cruel Prince? Have any recommendations that didn’t make the list? Let us know in the comments! 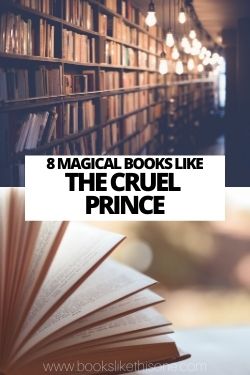