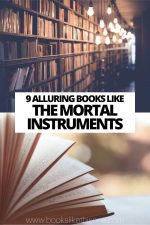 The Mortal Instruments series has become a staple “must read” for  YA audiences worldwide. Fifteen year old Clary Fray’s journey into a world of demons and angels that remains just out of sight of ordinary people, has captivated millions. The series has become so popular you might already recognise it in the TV adaptation Shadowhunters on Netflix. Whilst the show was cancelled that hasn’t stopped fans from devouring every book author Cassandra Clare has written since. But what other books like The Mortal Instruments can you read if you’ve exhausted Clare’s series?

There are books like City of Bones that delight in taking readers on a ride where you can’t always see what’s going to happen. Kishiro admirably questions our distinction between human and artificial intelligence (AI) in Battle Angel Alita.

The plot follows a cybernetic doctor who finds the head of a cyborg in a rubbish tip. When he rebuilds her, Alita is desperate to find out where she comes from, especially as she is equipped with deadly fighting instincts.

Whilst this is a graphic novel, Battle Angel Alita is well worth checking out. Like Clary Fray, Alita is on a journey to try and discover who she really is and what her purpose might be.

A character who discovers they have access to powers they never imagined? Check. Books like The Mortal Instruments series often explore the darker side of fantasy and Orpheum is no exception.

Mixing Greek mythology with fantasy is always a sure-fire way to grab a reader’s attention, and it is hard not to be drawn into Samantha’s world as she discovers her musical skills can be used to attack and kill people.

Samantha herself is an interesting protagonist, both likeable and flawed. A dedicated violinist who realises that the music school she’s been accepted to wants to use her ability for darker purposes.

Orpheum is a fascinating read for anyone who liked The Mortal Instruments.

The Empress Game, by Rhonda Mason

Books like City of Bones enjoy ramping up the tension early in the story. The Empress Game does this very well.

One seat on the intergalactic Sakien Empire’s supreme ruling body, the Council of Seven is up for grabs. It is the seat of the Empress Apparent and it’s won by competing in a tournament of ritualised combat.

Women of the empire will stop at nothing to secure political domination for their worlds and now Kayla Reinumion, a seasoned fighter has been tasked by a stranger to battle it out in the arena.

With plagues and occupations happening in the background, this novel goes beyond the usual YA tropes and throws, spies, plots, political intrigue, romance, violence and more at the reader.

Books like The Mortal Instruments often use religious iconography and myths to lend their stories a supernatural air that many readers love. Daughter of Smoke and Bone blends impossibly perfect angels with other supernatural beings.

Karou and Akiva are the two characters you will follow the most, and if you enjoy romance that gradually overpowers everything else, you will like this pairing. The story is interesting enough to keep you reading as Karou discovers that the monsters she’s been sketching in her notebook may actually be real.

The fact she can also speak otherworldly languages lends a nice hint of a hero who has yet to discover her true power. At the end of the day, if you liked City of Bones, you will adore Daughter of Smoke and Bone.

Books like City of Bones love tossing a seemingly ordinary character into a fantastical world hidden alongside our own. Certain Dark Things does this very well.

Welcome to Mexico City, a place filled with vampires as Domingo is about to discover as the beautiful and smart Aztec blood drinker, Atl crashes into his life. Atl is on the run from a rival clan, but Domingo might be just the human she needs to help her survive.

Vampires, police, criminals and other seedy types all crash together in a thrilling and captivating ride through Mexico City. Well worth a look if you enjoyed The Mortal Instruments series.

Her Dark Destiny, by Dave Ferraro

Ferraro is clearly a big fan of Buffy the Vampire Slayer and whilst Shanna Hunt isn’t quite as pop-cultural as Buffy Summers, she is interesting enough to warrant your attention. Books like The Mortal Instruments prefer to place a female protagonist at the centre of the story, and Her Dark Destiny is no different.

Shanna is a demon hunter but unlike Buffy, she’s on a quest for vengeance. Demons murdered her parents so she’s been hunting them ever since. Shanna is used to working alone but of course, gets thrown together with a bunch of other hunters.

And of course, they have to work together if they’re going to survive.

Angels have definitely been “in vogue” within the YA market for quite some time. Books like City of Bones use them often, but that’s not necessarily a bad thing. In Hush, Hush Nora Grey is more along the lines of Bella Swan than Shanna Hunt.

If you like supernatural romance though, this will probably be perfect for you. Falling in love with an angel isn’t easy, and Nora soon finds herself in the middle of an ancient battle between the fallen angels and their still-heavenly brethren.

If the romantic elements of The Mortal Instruments got your heart pumping, you will enjoy Hush, Hush.

The Raven Boys, by Maggie Stiefvater

Dysfunctional friendships meet the dead. That is how I felt when I first read The Raven Boys. Books like The Mortal Instruments don’t often mess around when it comes to exploring the darker side of death and this book is no exception.

Blue Sargent stands next to her clairvoyant mother every year in the churchyard as the soon-to-be deceased walk past. Blue can’t see them until a boy called Gansey emerges from the dark. Gansey’s from the private boy’s school Aglionby whose pupils are known as Raven Boys.

As Blue gets drawn closer and closer to Gansey and his motley group of friends, she begins to wonder if what she has been told about making her true love die, is actually true.

Readers who are suckers for supernatural romance will be swept away by this tale.

Whilst the book jacket makes you think “thriller”, Maximum Ride is most definitely like The Mortal Instruments in the way it uses supernatural tropes and subtly subverts reader expectations. Six kids with no families or homes are on the run.

Max Ride is our lead protagonist and like her friends, she has the ability to fly. That’s just the start of their powers though, and they want to know if they’re meant to save mankind or destroy it. If you’re thinking Maximum Ride is going to reveal Max and her friends to be beings we’ve already discussed, you might be in for a nice surprise.

Take a bit of the childlike good versus evil from Harry Potter and the artificial destiny Ender Wiggins thinks he has to follow in Ender’s Game and you come to Maximum Ride. Fast, fun and very furious, this is well worth a look if you enjoyed City of Bones.

Books like The Mortal Instruments blend fantasy, romance and the supernatural in a heady mix designed to keep you reading. If you enjoyed City of Bones at least one of the titles we’ve recommended should keep you entertained.

Are you looking for more books like The Mortal Instruments? Have any recommendations that didn’t make the list? Let us know in the comments! 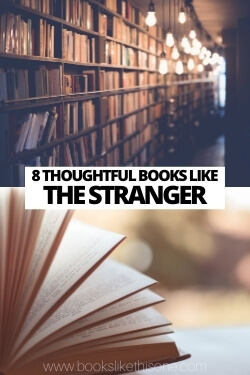