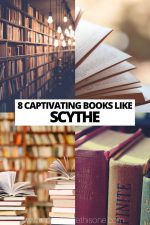 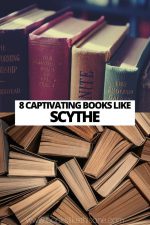 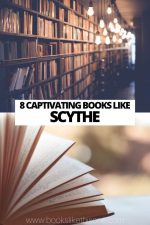 Imagine a world with no hunger, no disease, no war, no misery. In Scythe, humanity has conquered all those things, but the human population needs to be kept in check. Scythes are the only people allowed to “take life” in order to keep the population under control.

Viewed through a dark lens, Scythe could well be a reflection on where our own world is headed if we continue to make medical breakthroughs and manage global warming. Citra and Rowan are two protagonists who soon discover that being apprentice scythes means facing up to the corruption that exists in many human societies.

If you’ve already read Scythe, there are similar titles available to read.

This Mortal Coil, by Emily Suvada

Books like Scythe often deal with death and corruption. This Mortal Coil follows Catarina as she struggles to find the vaccine to a devastating plague. Timely reading for 2020 and beyond.

Unlike the current crisis, the plague in This Mortal Coil has people exploding into toxic Hydra clouds and Catarina is humanity’s only chance for survival. Despite being dystopian fiction at its most bleak, This Mortal Coil is a fast-paced and thoughtful story.

The dangers of corporate control at the expense of people has never been more prevalent, and This Mortal Coil explores this and other themes ably.

The Program, by Suzanne Young

Books like Scythe often explore stigmatised subjects. The Program follows Sloane, a teenaged girl who knows just how dangerous it is to cry in front of anyone. Suicide is an international epidemic and any betrayal of emotion could land Sloane in The Program (think Big Brother). Anyone who ends up in the Program comes back feeling nothing.

James is the only person Sloane feels she can be herself with, but showing any feeling could end with them being sent to The Program. This book has both proponents and detractors. Suicide is still considered a taboo subject in many cultures, so to see a YA novel face it head-on whilst remaining sensitive is worthy of applause.

The Program is a very sad story, but it is one worth reading if you liked Scythe.

The Truth App, by Jack Heath

Anyone who’s read books like Scythe knows that things are never what they appear. The Truth App is the latest craze in the town of Kelton.

Unfortunately, for its teenaged creator, Jarli, it’s also made him target number 1 for his classmates, family and local criminals. After all, no one really wants their deepest darkest secrets exposed by an app.

Jack Heath has written a wildly entertaining page-turning YA thriller. The back story is minimal, but this is a story very much more focused on action. The idea of exposing every person’s secrets is not a new one, but in The Truth App, this is explored in an intriguing manner. Well worth a read for fans of Scythe.

The Diabolic, by S.J. Kincaid

Some books like Scythe explore the future in a way many adult novels wouldn’t dare. In The Diabolic, the first in Kincaid’s series of novels, Diabolics are humanoid teenagers created for a single purpose: Kill to protect the person you’ve been created for.

We follow Nemesis, a Diabolic created to protect Sidonia, a galactic senator’s daughter. Despite growing up side-by-side, the two girls are not sisters. The story becomes a lot more interesting when Nemesis is forced to impersonate Sidonia. Finding herself navigating a world of corrupt politicians, Nemesis discovers skills beyond killing.

Nemesis begins the story as a sort of one-note monster. A ruthless killing machine who will kill as many as needed to keep Sidonia safe. The richness of this story lies in Nemesis’s exploration of her own burgeoning humanity.

The world-building merely adds to the textures of this tale, and fans of Scythe will have a blast reading The Diabolic.

Books like Scythe often incorporate a strict class-based society. This could be seen as a sad reflection on the way our own world works. In Configured, a virus has decimated the earth’s population. There are survivors, but they are divided into three tiers of intellect with everyone focused on their specific duties.

Avlyn is our protagonist here, and she is naturally highly intelligent. Separated from her twin at birth, she thrived whilst he died. Things change rapidly for Avlyn when a series of rebel incursions to her city opens her eyes to the possibility of breaking away from her world.

Configured deals with themes of freedom and choice in society. How much freedom do any of us actually have in our own lives? How much choice do the societies in which we live, provide?

This novel asks these questions of the reader whilst sprinkling in some heroics and romance. An interesting read for fans of Scythe.

How we view death and disease populates books like Scythe. I have written about Delirium in a previous article and I cite it here because it bears similarities with Scythe.

In a dark alternate version of the US, love is a disease with everyone treated to a procedure called the ‘Cure’ when they turn 18. Lena is looking forward to being free of love as it destroyed her mother. However, when Lena meets Alex, a boy who lives outside the government’s radar, she soon begins questioning everything about the society in which she lives.

Delirium has divided opinion online and off, with some criticising the teen romance, whilst others applaud it. Like Scythe, Delirium enjoys pitting protagonist against the world they live in for better or worse. A strangely light-hearted dystopian story that splits opinion, but remains popular.

Books like Scythe enjoy telling stories in unique ways. Illuminae differs from the YA pack in the way the narrative is told through emails, dossiers, maps, files, instant messages, interviews and more.

Whilst it is not the first book to employ this method of storytelling (see Dracula and World War Z), there are not many YA novels quite like it.

The story revolves around Kady and Ezra, two teen hackers who were happily dating before breaking up. When aliens literally invade the planet, Kady discovers the only person who can help might be her ex-boyfriend.

Set in 2575, Illuminae gives the reader ambiguous A.I.s, rival mega-corporations, and a deadly mutating virus to contend with as Kady rushes to discover the truth beneath the data.

Illuminae is another book that splits opinion, with some readers loving the narrative devices and others hating them. I always recommend reading yourself before casting an opinion.

The Invisible Life of Addie LaRue, by V.E. Schwab

There are books like Scythe that manage to subvert all your expectations. The Invisible Life of Addie LaRue is one such book. I was already a follower of Schwab’s after I read the brilliant Vicious several years ago.

The Invisible Life of Addie LaRue begins in France, 1714 where a young woman makes a Faustian deal so that she can live forever. The catch: everyone she meets forgets her. Imagine being able to live forever, but effectively apart from everyone else? Claire North played with a similar theme in The Sudden Appearance of Hope, a book that is also worth reading.

Both stories follow protagonists who live apart from the world around them. Addie LaRue lives for herself, but is desperate for someone – anyone – to remember her. After all, what is the point of life if there is no one around to remember you?

The Invisible Life of Addie LaRue follows Addie over three hundred years. Filled with realistic queer characters (Addie might be bi or pansexual), depression, and the general anxiety that comes as you try to feel your way into life during your twenties, this novel has something for everyone.

Already read this book? Check out our list of more books like The Invisible Life of Addie LaRue!

There are many books like Scythe that deal with relatable themes. Fears of death. The anxiety that arises when you start a new job. Scared that you might die alone and forgotten by everyone around you. The above titles are just a few of our suggestions.

Are you searching for more books like Scythe? Have any recommendations that didn’t make the list? Let us know in the comments! 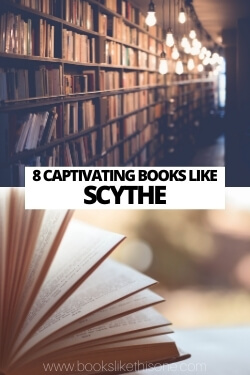