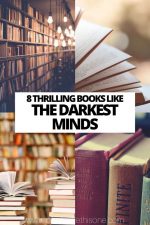 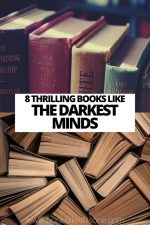 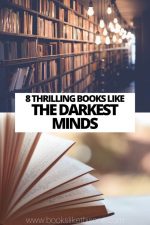 Are you searching for more books like The Darkest Minds?

YA has always been a huge and expansive genre. The rise of social media has made more young adult fiction books available to more readers. The Darkest Minds first came out in December 2012, and the series has since become a power force in the YA genre.

The tale of Ruby, a young girl locked up for having a disease that leaves her with psychic abilities, might seem familiar. Yet, The Darkest Minds blends thriller with fantasy, dystopia with romance in a fun concoction that keeps you reading to the end. If you’ve already been infected by this series and are looking for similar titles, there are other books like The Darkest Minds that can help.

Books like The Darkest Minds enjoy subverting expectations. Renegades is darkly amusing in that it casts the ‘Renegade’ prodigies (basically superheroes) as morally grey people. The Boys comic book also plays with this theme, but Renegades focuses more on the lead protagonist, Nova (a former villain) and her mission of revenge.

It also flips us behind the eyes of fellow lead, Adrian, a Renegade with his own belief in justice. The dynamic between the two plays out well, with several moments that force you to re-examine Nova and Adrian’s motivations.

Is Nova truly evil? Is Adrian as morally righteous as he seems? This book will have you wondering all the way to the end.

A similar title to The Darkest Minds in that Juliette is also locked up because of a fear of her abilities. I have reviewed Shatter Me in a previous article, but the book deserves its place on this list. Juliette and Ruby are cut from the same cloth.

With just a touch, Juliette can kill someone, without even meaning too. With a shadowy authoritarian organisation (the Reestablishment) looking to use Juliette as a weapon, it’s hard not to root for this character as she struggles to survive and perhaps have a little peace in her life.

Her difficulty in making and keeping friends will resonate with anyone who has ever felt alone or different from everyone else. A really solid tale told in a unique (and for some readers, controversial) style.

Fate of Flames, by Sarah Raughly

There are books like The Darkest Minds that enjoy playing with the supernatural almost as much as Alexandra Bracken does. Sarah Raughly’s Fate of Flames provides an enticing setup. Four girls (the Effigies) each gained the power to control one of the classical elements at the same time that dangerous Phantoms appear.

For years they were each able to combine their powers and beat back the Phantom attacks, with a new girl chosen every time an Effigy died (much like the ‘slayer’ in Buffy the Vampire Slayer). Yet with technologies in place to defend against Phantom attacks, the Effigies are little more than celebrities, televised and talked about in online forums.

The setup itself is intriguing, but the story heats up when lead protagonist, Maia, unexpectedly becomes the Fire Effigy just as the Phantoms are massing for an attack. Fate of Flames is filled with a diverse cast of characters filled with people from the Caribbean and Europe.

Whilst some of the characters are fairly one dimensional, the premise of the story is strong enough to keep you reading to the end.

Some books like The Darkest Minds come from authors outside of their comfort zone. Known more for his Alex Cross series of thrillers, Crazy House is James Patterson’s foray into the YA genre. Largely, it works.

Set in the future where overpopulation has become a catastrophic problem, we follow Becca. Becca is a young teen thrown into a prison called the Crazy House. To avoid being executed, she has to shut her mouth and keep her head down. Her sister, Cassie, is Becca’s only hope for survival.

To say more would be to spoil the plot, but I was genuinely impressed with Patterson’s efforts to use the real fear of what overpopulation might mean for the future of humanity. Themes of assisted suicide and permission to procreate are both explored, and I never felt like I was being talked down to. Whilst there are plot inconsistencies, the story itself draws you along in an entertaining fashion.

Carve the Mark, by Veronica Roth

Books like The Darkest Minds often mix science fiction, humour, dystopia, horror and fantasy. Veronica Roth is an author who enjoys blending these elements. In Carve the Mark, the Divergent series author tackles a story she has had in her head since she was 12 years old.

Cyra and Akos live on a planet where violence and vengeance are the norm. Everyone around them also has a unique power with different people using their powers for good or evil. Cyra and Akos both come from opposing sides and are forced to work together when Akos’s younger brother is captured by Cyra’s quite-mad older sibling.

There’s just one problem; Cyra and Akos hate each other. I really enjoyed this book. Having two leads establish an antagonistic relationship always makes for a more entertaining read than two good guys trying to save the day together.

A strong premise is sometimes all it takes to encourage us to pick up a book. Books like The Darkest Minds often entice readers in by offering a killer hook right from the start. Imagine a world where natural death has been conquered. In Scythe, the only people who can administer death are scythes, people that have the gift to take life but only under the command of their superiors.

Citra and Rowan are two teens chosen to apprentice a scythe named Faraday. They know that failure means death. Some readers have described the idea of a ‘post mortality’ society as fascinating and it really is. However, it could get boring very quickly if it weren’t for the scythes.

Their ability to be the only people able to administer a true death is what makes this story work. Citra and Roan are likeable enough, and whilst I would have liked a little more dimension around some of the characters, Scythe is a good book to read.

Books like The Darkest Minds enjoy challenging our moral compass. What is right and wrong in war? Is there even such a thing as good and evil? Ender’s Game is a nuanced story about the dangers of assumption when it comes to race. Assumptions can lead to misunderstanding and eventually, war.

The story follows young Andrew “Ender” Wiggin, a young boy who is also a genetic experiment. Ender thinks he’s playing computer simulations when in fact he is engaging in something far more real. The war with the Buggers has been raging for a century, and earth is getting desperate in its fight against this alien menace.

Ender and his two rival siblings might just hold the key to your survival; if Ender can win that is. This novel has one of the most stand out jaw-dropping endings you are likely to read in science fiction. If someone has already spoiled it for you, I am sorry. If not, I highly recommend reading this seminal sci-fi from the mid-80s and dare you to wonder how you would feel in Ender’s situation?

Michael Vey: The Prisoner of Cell 25, by Richard Paul Evans

Another similar title to The Darkest Minds, Michael Vey: The Prisoner of Cell 25 puts us into the mind of Michael Vey, a seemingly typical 14-year-old with a case of Tourette’s syndrome. But Michael has another difference, he is able to conduct and control electricity.

This is a really fun and chippy high school fantasy much in the vein of Percy Jackson. Michael is both snarky and dumb enough to relate to and his friend Ostin provides many laugh-out-loud moments. Well worth a read.

There are enough books like The Darkest Minds to keep you reading for you years should you want to. The ones above are just the ones we think might appeal the most if you loved Alexandra Bracken’s dystopian tale.

Are you looking for more books like The Darkest Minds? Have any recommendations that didn’t make the list? Let us know in the comments! 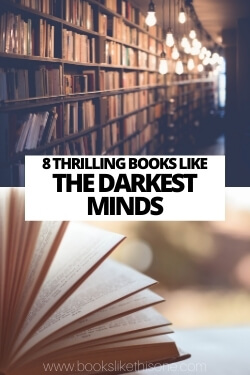