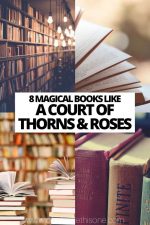 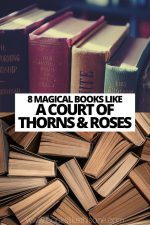 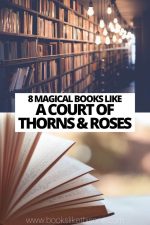 Books can be like Marmite; you love some, you hate others. A Court of Thorns and Roses seems to very much be a ‘marmite’ read. A loose retelling of Beauty & the Beast, this fantasy romance is targeted very much at the YA market, yet the lead protagonist, Feyre, has more character agency than Beauty ever did. Beauty is almost too perfect, whereas Feyre has many flaws and defects that make her more believable as a character. If you’ve already dined on Maas’ romantically political sorcery, there are other books like A Court of Thorns and Roses available to consume.

Books like A Court of Thorns and Roses are often polarising. Nevernight is no exception. The tale of Mia Corvere’s quest for vengeance seems to split readers down the middle. To me, that is usually the sign of a book worth reading.

Set in a world bleached by three suns, Mia is hunted by her father’s executioners before being inducted into the deadliest flock of assassins. The joy of this tale lies within learning more about the girl underneath the killer. Mia is deadly but vulnerable. Despite wanting to kill her way through swathes of enemies, she has a heart and isn’t afraid to show it to her fellow assassins on occasion.

Another thing Kristoff does well is in the depiction of Mia’s bisexuality. It’s just part of her character, not something for readers to point at and debate. Nevernight has divided opinions, but it is well worth a read.

The Cruel Prince (The Folk of the Air 1), by Holly Black

There are many books like A Court of Thorns and Roses that revel in giving their lead protagonists tragic backstories. In The Cruel Prince, Jude’s parents are murdered when she’s seven years old and both she and her sisters are stolen to live in the backstabbing High Court of Faerie.

Jude suffers from symptoms of Stockholm syndrome as she becomes desperate to belong at court, despite the fact that most fey despise humans. But the trickery and treacherous nature of court soon rubs off on Jude and she finds herself embroiled in deception, bloodshed and betrayals. Jude is an intriguing character.

Strong-willed and determined, yet devious and dark. If you could pick a colour for her, it would definitely be grey, and that’s what makes this such an entertaining read.

Raphsodic (The Bargainer 1), by Laura Thalassa

Books like A Court of Thorns and Roses are steeped in magic and often have fairy folk as their antagonists and sometimes protagonists. In Raphsodic we are introduced to Callypso (Callie) Lillis, a siren with debts mounting on her arm – literally. She’s been collecting a bracelet of black beads which are magical favours she has to pay back or die for.

Enter The Bargainer, Lord of the Night and someone who Callie owes more to than anyone else. He needs her help to find out who’s been kidnapping fae warriors and returning the women in glass coffins with a dark new breed of children with them.

Whilst the plot sounds familiar, the setting and feel of Raphsodic is, quite literally, magic. Sirens are not a common character trope in fantasy. Here we witness a fairy tale creature from the background take the lead. It makes a nice change.

The Bargainer and Callie’s complicated relationship coupled with an unknown evil behind the kidnappings make this a fun read.

Another book like A Court of Thorns and Roses is Darkfever. When MacKayla’s (Mac) sister is murdered, Mac is left with a cryptic message on her mobile phone. It leads her to Ireland where she is quickly faced with a horrific challenge; stay alive long enough to master a magical power she didn’t know she had.

For Mac can see beyond the human realm into the dangerous lands of the Fae. And she’s running out of time to stop dark forces from gaining control of both worlds.

Darkfever is another book that appeals according to taste. Whilst it has an interesting goodie versus baddie setup, the more erotically charged segments lean heavily towards the more romantic fantasists. Jericho and V’lane are two delightfully nasty characters who in the real world, would be reprimanded for their appalling behaviour towards Mac.

In Darkfever they are the ultimate ‘bad-boy’ fantasy; cruel, sadistic and borderline abusive. A clever reflection you could hold against some warped men in the real world.

A Curse So Dark and Lonely (Cursebreakers 1), by Brigid Kemmerer

Some books like A Court of Thorns and Roses like to torture their characters with curses. In A Curse So Dark and Lonely Prince Rhen of Emberfall is doomed to remain 18 and repeat every Autumn as a rampaging beast that destroys everyone and everything that gets in his way.

Harper is a girl living in contemporary Washington D.C. trying to look after her dying mother and petty-criminal brother. When she’s kidnapped by Grey (the Commander of Emberfall’s armies) and taken into Emberfall, Harper realises Prince Rhen sees her as a way to break the curse.

Beauty & the Beast retellings are ten a penny, but this one is bloodier and more divisive than most. Harper lives with cerebral palsy, making her determination and drive more impressive. An excellent illustration of how disabilities do not automatically mean you’re doomed to lead a lesser life.

A Curse So Dark and Lonely is an interesting retelling, and if you’re into books like A Court of Thorns and Roses, one you definitely don’t want to miss.

There are titles similar to A Court of Thorns and Roses that like to trek beyond the standard political romance intrigue. Whilst those elements are present in Six of Crows, the agency of the novel comes from the six characters we are introduced to and follow throughout.

An ex-con. A gambling sharpshooter. A privileged runaway. A thief. A spy. A down on her luck witch (Heartrender). They are all brought together by criminal prodigy Kaz who needs them to pull off a heist that could make them rich. Of course, things are never that simple and Kaz begins to realise he and his mismatched crew might be the only people between the world and destruction.

The plotting and character work on show here are superb. The novel works because of the characters, making Six of Crows one of the more thrilling reads on this list. Mind games, betrayals, doomed romance and more are all wrought over and leave you gasping for more by the time you finish.

Dangerous and questionable romance is a common theme throughout books like A Crown of Thorns and Roses. Hush, Hush plays with this theme like a spider plays with its food, gently stalking its way towards a trapped fly before striking.

This book has polarised opinion as much as others on this list. Comparisons to Twilight have been made with Patch pursuing Nora in much the same way Edward Cullen does with Bella. Patch’s ‘dark brooding mysterious protagonist’ plays Nora’s ‘can’t help herself from being drawn in’ motivation well.

Yet Patch isn’t a vampire. He’s a fallen angel giving the dangerous romance a new sting in the tale. And he’s about to pull Nora into a centuries-old war. The setting and mythology of this story is what makes it interesting to read. The romantic elements and Nora’s teenage pangs, less so.

The Twilight comparisons are perhaps unsurprising considering this book came out in 2009, just when the Twilight craze was really taking off. Again, this is another book that divides opinion, but if you like A Court of Thorns and Roses you might enjoy this one too.

Set in a sort of alternative version of France, Louise ‘Lou’ le Blanc is a witch who fled her coven and came to live in Cesarine. Witches are hunted and burned if caught, so Lou has to work hard to stay alive.

Enter Reid Diggory, a Church Chasseur (Witch Hunter) who crosses paths with Lou and through a bad stunt, ends up marrying her. You can already see the direction the plot is taking, but as with life, the journey itself is what makes it worthwhile. Lou and Reid love/hate each other, making their banter fun to read and the feelings that develop between them, believable.

Less divisive than other books on this list, Serpent & Dove is an enjoyably light fantasy romance that will please many readers.

Romance, fantasy, fairies and magic are found throughout A Court of Thorns and Roses. The books above are just some of the titles we think you’ll enjoy based on Mass’s novel. Rest assured, there are plenty more that we haven’t had time to mention. So let us know if you agree with our list or think there are other books we should have picked instead.

Are you looking for more books like A Court of Thorns and Roses? Have any recommendations that didn’t make the list? Let us know in the comments! 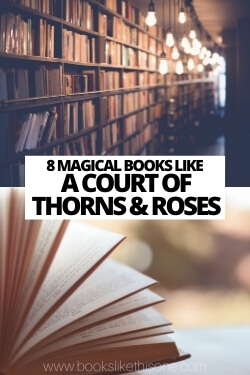