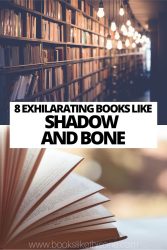 Alina Starkov may be another “Chosen one” trope character, but she has captured the attention of young adult readers globally. This might be due to her relatability; awkward, not very good at anything, lonely, frightened of uncertainty. These are all traits that everyone can identify with at some point in our lives.

Shadow and Bone has taken the YA market by storm and has since been adapted into a Netflix show. Alina’s journey from nobody to possible world-saver is thrilling and filled with emotion. However, if you’ve already absorbed this series, what other books like Shadow and Bone can you read?

If you like quest novels, then there is a lot to enjoy in We Hunt the Flame. Some books like Shadow and Bone enjoy telling us similar stories in different cloaks. This is no exception, but it is an enjoyable ride.

Inspired by middle eastern magic and myth, we are introduced to Zafira the Hunter, a girl who disguises herself as a man when she leaves the confines of the cursed forest she lives in to feed her people.

Nasir is the son of the sultan and law-enforcer of his brutish father. Both are looking for an ancient artefact that can restore magic to the world, but Nasir has been ordered to also kill the Hunter, setting up a fun conflict as these characters eventually collide against the backdrop of an even deadlier threat.

Some reviewers have loved this, whilst others have criticised the story for being a bit ‘same-old-same-old’. Personally, sometimes there’s nothing like dipping your toes into a familiar and comfortable read.

Sad and uplifting apply to They Both Die at the End. There are books similar to Shadow and Bone that manage to capture conflicting emotions, and this is one of them.

What follows is a wonderful tale of two people trying to connect and live their lives to the fullest, all in the space of a single day. This is a book that reminds you just how fleeting life is. We can all trudge about in a daze forgetting that one day, we will be dead and it could be tomorrow.

If you like examining what life means to you, you should enjoy this story from Silvera.

Have you already read this book? Check out our list of books like They Both Die At The End!

Unafraid to explore the love between Achilles and Patroclus, in The Song of Achilles Miller has done what many A-list producers in Hollywood often fail to do.

Books like Shadow and Bone are needed as they engage with LGBTQ+ readers in ways that many mainstream fantasy novels do not. When you read Homer’s Iliad you would have to be living under a rock not to realise that Achilles and Patroclus were passionately in love.

In Miller’s spin of this classic tale, Achilles and Patroclus are brought together by chance and risk the god’s wrath with their burgeoning relationship.

If you’ve read the Iliad you will already know the tragedy that lies at the heart of this story, but this is a book I would recommend for any young reader exploring their own identity.

Daughter of the Pirate King, by Tricia Levenseller

A heist with pirates and romance thrown in? Sounds good to me. Some books similar to Shadow and Bone promise the reader adventure, thrills and magic. Daughter of the Pirate King is like a cheeky medieval court jester, revelling in mischief, humour, and derring-do.

Alosa is the daughter of Kalligan, the king of the pirates and a terror of the seas. Alosa is tougher than her father though, so when he sends her on a mission to retrieve part of a map that will lead to a secret island, Alosa hatches a devious plan.

Allowing herself to be captured by their enemies, Alosa uses the opportunity to search their ship and find out everything she can. What she doesn’t count on is the allure of the ship’s first mate, Riden.

Levenseller actively mocks the usual (read: sickening) romantic tropes you find in YA, and several passages had me laughing out loud. Alosa is not someone you want to cross, but she is someone you’d cheerfully accompany on a night out knowing full well you’d have a great time even if you do end up drunk, in prison or both.

Already read this book? Check out our list of more books like The Daughter of the Pirate King!

The Gilded Wolves, by Roshani Chokshi

Friendship, scheming and lots of puzzles collide in The Gilded Wolves, Chokshi’s late 19th-century tale set in Paris. You can almost smell the whiff of the industrial revolution emanate from the page as we follow treasure-hunter and wealthy hotelier Séverin Montagnet-Alarie on his quest.

Books like Shadow and Bone enjoy inviting readers to accompany their characters on quest-like journeys and this is no exception.

What really holds this story together is the diverse set of characters that both aid and hinder Séverin’s mission to retrieve the Horus Eye for the Order of Babel who have promised him his rightful inheritance if he succeeds.

Tristan, Laila, Zofia, Hypnos, and Enrique are all people you will come to love, hate, laugh at and feel sorry for at various points. This is a thrilling ride well worth your time.

Wicked Saints, by Emily A. Duncan

Forbidden romance, assassination and speaking to Gods. That last part of the sentence is what piqued my curiosity when I was perusing Wicked Saints.

There are so many books that are similar to Shadow and Bone that elevate the romance above everything else, but here the romance is just one element in a larger tapestry.

The most intriguing aspect of the story is how deities can actually be quantified. It eliminates the subjectivity of religion and perversely makes it more like a traditional fantasy magic system you expect in books like Mistborn or the Wheel of Time series.

Just like the ancient Greek myths, people can speak to their Gods in Wicked Saints. This novel has drawn a lot of derision from some quarters, but I think it is worth your time. Remember, art is always subjective.

A mastery of bone shard magic lies at the centre of The Bone Shard Daughter, a tale of revolution and power. Lin is the daughter of an emperor whose reign has lasted for decades.

He uses his command of animal-like constructs to maintain law and order but he refuses to recognise Lin as heir to the throne.

This prompts Lin to learn the forbidden art of bone shard magic to prove herself and her power. As you come to know Lin, Jovis and Phalue, you soon begin to realise why this book has done so well in the sales charts.

Stewart uses four distinct storylines and sets up threads that you know are going to continue later in the series. If you love the complexities of Shadow and Bone there is much to enjoy here.

The Last Lumenian, by S.G. Blaise

Princesses don’t need saving. YOU need saving. This is the central premise behind The Last Lumenian. Like Shadow and Bone, the story pits a young woman against seemingly impossible odds.

Lilla is a rebel trying to fight for the freedom of refugees whilst tackling a distant father, meddling factions and a war between two archgods. Told in the first person, the characters manage to shine which is a testament to Blaise’s skill as a writer.

The sci-fi aspect to the plot is what goaded me in (I love science fiction), but the interesting set-ups, complex characters and articulate writing style is what kept me going. Well worth a read.

If you’ve already devoured the Shadow and Bone series, some of the above titles have something for you.

Are you looking for more books like Shadow and Bone? Have any recommendations that didn’t make the list? Let us know in the comments! 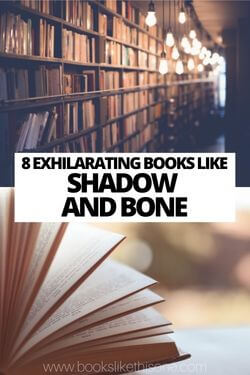