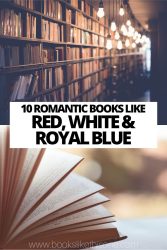 Books like Red, White and Royal Blue by Casey McQuiston tug at your heartstrings, make you laugh out loud and bring the characters and their feelings alive on the page.

Landing a place on the New York Times Bestsellers List in June 2019, Red, White and Royal Blue has been optioned for a film.

The plot follows America’s First Son Alex Claremont-Diaz and England’s Prince Henry who must stage a fake friendship for the press after an incident at a royal wedding between the two threatens American-British relations.

As President Claremont kickstarts her bid for reelection, Alex and Henry find themselves pursuing a secret relationship. Their feelings could derail the President’s campaign as well as the two nations. Are their feelings for each other worth all the sacrifice?

This romantic comedy will have you searching for more books like Red, White and Royal Blue which is why I’ve complied ten books for you to read next!

What If It’s Us, by Becky Albertalli and Adam Silvera

A great contemporary romance if you are looking for books similar to Red, White and Royal Blue is Albertalli and Silvera’s What If It’s Us. An overall heartwarming and comforting book, we follow Arthur who is only visiting New York for the summer.

Arthur accidentally meets Ben – who is getting rid of the last of his ex-boyfriend’s stuff – at the post office. The two leave and think that was the end until, they get reunited.

Life seems to get in the way for Arthur and Ben as they try to plan date after date. The two want to make their situationship work but sometimes the universe has other plans.

Follow Arthur and Ben as they figure things out in What If It’s Us.

For those who love romance as well as dystopian action, comparable to The Walking Dead, Wranglestone is the perfect mix.

Set in post-apocalyptic America, we are introduced to a community who have survived the living dead by setting up in a national park surrounded by water.

Winter is approaching and as the lake begins to freeze, the dead get closer to reaching their shores. Peter is a homebody who lets a stranger ashore and puts everyone in danger.

Forced to leave Wranglestone, Peter has to help rancher Cooper keep the dead away before the lake freezes over. Love begins to blossom but as it does, Wranglestone’s dark past is revealed.

Wranglestone is the perfect substitute if you’re looking for a book similar to Red, White and Royal Blue.

Only Mostly Devastated, by Sophie Gonzales

Gonzales’ Only Mostly Devastated is a boy-meets-boy Grease re-telling — so this book is great for those who love the musical!

Ollie and Will have the perfect summer fling however, when the summer holidays end, Will stops replying to Ollie’s messages and leaves him heartbroken. As if things weren’t already hard enough, Ollie has to move across the country and enroll at a new school after a family emergency.

Things look up as Ollie finds out that his new school is in fact Will’s however, it is not the Will he met over summer. This Will is the class clown, somewhat of a jerk and closeted.

Ollie decides pursuing Will again isn’t worth the pain but the two find themselves around each other far too often – can he trust Will with his heart after last time?

If you liked the will they, won’t they of Red, White and Royal Blue, you’ll love Only Mostly Devastated.

Fake dating is a popular trope in the romance genre and it doesn’t get better than Hall’s Boyfriend Material.

The plot follows Luc O’Donnell who’s been in the limelight since he was born to two rockstar parents. His parents split when he was young and with his father getting on and off help for addiction, he’s never met his famous parent.

Out of rehab, Luc’s dad is making a comeback, throwing him straight back into the public eye. One compromising photo is enough for Luc to need to clean up his image so he finds Oliver Blackwood who is nice and normal – exactly what Luc needs.

However, the two realize they have nothing in common and make a deal to be fake boyfriends for the camera.

Despite this, the line between fiction and fact is easily blurred and soon the two find themselves falling for one another.

Boyfriend Material is a flawless romcom for those looking for books like Red, White and Royal Blue.

Much like Red, White and Royal Blue and other books on this list, The Love Hypothesis involves a fake relationship.

Olive Smith doesn’t believe in long term romantic relationships however; her best friend does. When Olive tells her best friend that she is dating, Anh needs proof like any other scientist. So, Olive panics and kisses the first man she crosses paths with.

This man happens to be Adam Carlsen, a young professor who decides to keep up the charade.

Despite this, things get out of control at a science conference and Olive’s career is put in jeopardy yet Adam has her back. For someone who doesn’t believe in romantic relationships, Olive is very close to falling herself.

Carry On is perfect for fans of Rowell’s Fangirl and Rowling’s Harry Potter. Like Red, White and Royal Blue, Carry On is a queer, enemies to lovers story. Set in a fantasy world at Watford School of Magicks, Simon Snow is the worst ‘Chosen One’.

Everything seems to be going wrong for him: his girlfriend broke up with him, his mentor is avoiding him and a magic-eating monster with Simon’s face is creating chaos everywhere. His roommate, nemesis and vampire, Baz, would love seeing Simon like this except he is nowhere to be found.

For those wanting a love story with some monsters and magic, this is the perfect book like Red, White and Royal Blue!

The Unhoneymooners is a heartwarming romcom for those wanting a book similar to Red, White and Royal Blue.

Olive is the unlucky twin. Her sister, Ami, however seems to have endless good luck. She’s financing her wedding by winning various online competitions and has the perfect day planned. Olive is determined to just get through the wedding day without any mishaps so she can go back to her regular old life.

However, the entire wedding party gets food poisoning except Olive and her nemesis, best man Ethan.

With an all-expenses-paid holiday that the bride and groom can’t make, the sworn enemies put their feelings aside for a free trip to Hawaii.

Determined to have the time of their lives – separately – things go awry when Olive’s future boss turns up unexpectedly. Now Olive and Ethan have to pretend to be newlyweds but somehow the two don’t seem to mind that much.

Like Red, White and Royal Blue, this book sees a fake relationship grow into much more!

I Wish You All the Best, by Mason Deaver

I Wish You All the Best is a celebration of love, friendship and hope in the face of adversity, much like Red, White and Royal Blue.

The book follows Ben De Backer who is rejected after coming out as non-binary to their parents. Thrown out, they are forced to move in with their estranged sister and her husband. Ben decides not to come out to anyone but their sister, her husband and their therapist.

Ben just wants to get through the last half of Senior year but when Nathan Allen befriends them, new feelings begin to arise and things are looking up.

This uplifting book is a great alternative for those wanting more books like Red, White and Royal Blue.

Her Royal Highness, by Rachel Hawkins

If you also love the popular royal trope, then Her Royal Highness is the perfect book like Red, White and Royal Blue.

Her Royal Highness is a standalone companion novel to Hawkins’ Prince Charming. Set at an exclusive boarding school in Scotland, we follow Houston-born Millie, who moved countries following heartbreak with her kind of girlfriend/best friend.

When Millie arrives, however, she finds that her roommate, Flora, is the Princess of Scotland.

Although the two girls can’t stand each other at first, soon Millie finds herself in another kind of relationship/kind of best friend situation. Her heartbreak still haunting her, Millie knows these things are not destined to last… or are they?

For a cute, feel-good romance book like Red, White and Royal Blue, be sure to check Her Royal Highness out!

For those of us who enjoy reading in other formats, Oseman’s popular webcomic has been published physically in volumes for all to enjoy! With four volumes already published and more being written, there is much to enjoy with this series.

Set in Truham Grammar School for Boys, Heartstopper follows Charlie, an openly gay boy who was outed in his last year and bullied, and Nick, the rugby boy in the year above. The two boys find themselves quickly becoming friends and Charlie realizes he is falling for Nick.

Charlie knows he’s in for heartbreak but sometimes… love persists.

Heartstopper is easy to read, full of fluff and the perfect substitute for people wanting books similar to Red, White and Royal Blue.

Books like Red, White and Royal Blue show the highs and lows of falling in love and the obstacles people must face in the pursuit of happiness. The books on this list follow characters who are on journeys to find not just love, but themselves as well.

Are you looking for books similar to Red, White and Royal Blue? Have any recommendations that didn’t make the list? Let us know in the comments! 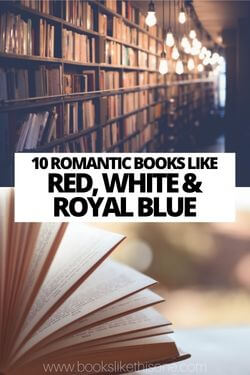