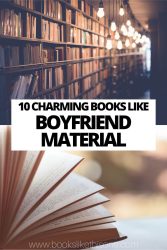 Are you looking for more books like Boyfriend Material?

Sometimes, nothing is better than a good old romantic comedy and it doesn’t get better than Alexis Hall’s Boyfriend Material. The book follows Luc O’Donnell, a young boy who’s never known anything but the limelight after being born to two famous rockstar parents.

However, Luc has been estranged from his father following his parents’ split when he was young and his father’s drug addiction. After a self-destructive stint in college that was plastered over the headlines, Luc has cleaned up his act. Now, out of rehab, Luc’s father is back better than ever meaning Luc is thrown back into the public eye once again.

Too afraid to ever let anyone get too close in case they sell a story to the press; Luc’s had a hard time with love. Now, after a misinterpreted, compromising photo, Luc needs to clean up his image once more. Enter Oliver Blackwood, a nice and normal guy who makes a deal with Luc to be fake boyfriends for the cameras.

However, it is a thin line between fact and fiction and soon their relationship doesn’t seem quite so pretend anymore. If you have already read Boyfriend Material but want something similar, then look no further as I have compiled a list of ten books like Boyfriend Material.

When the press photograph an incident between the international rivals at a royal wedding, the leak threatens American-British relations meaning the pair are forced to stage a fake friendship for the public.

As Alex’s mother begins her bid for reelection, the two boys find themselves falling in love and hiding their romantic relationship.

The pair must decide whether their feelings are worth derailing the President’s campaign and causing uproar in two nations. This romantic comedy will have you laughing out loud whilst also tugging at your heartstrings. Perfect for fans of Boyfriend Material.

Have you already read this novel? Check out our list of books like Red, White and Royal Blue!

Her Royal Highness, by Rachel Hawkins

Set in an exclusive boarding school in Scotland, we meet Millie, a young girl from Houston who moves across the ocean to a new school following a breakup with her best friend and kind-of girlfriend.

Heartbroken and all alone in a new country, Millie arrives to find her new roommate is Flora, the Princess of Scotland. At first, the pair cannot stand each other but soon Millie begins to find herself in another sticky situation with Flora.

Are they friends or girlfriends? Millie’s not sure but whatever their relationship is, it passes the border or friendship.

With her heart still healing from her past in Houston, Millie knows this sort of thing isn’t destined to last but perhaps Flora will prove her wrong. For a feel-good romance involving a high-stakes romance, pick up Her Royal Highness for a book similar to Boyfriend Material.

Aristotle and Dante meet at a local swimming pool in the summer of 1987. The two are complete opposites; Dante loves reading all types of literature and admiring art whilst Ari struggles to keep his anger and emotions in check.

After that fateful meeting at the pool, the two are inseparable until Dante is told he has to move away for an entire year. The boys know they have the next summer to spend every day with each other and promise to stay friends until that time comes but a year is a long time.

Aristotle and Dante Discover the Secrets of the Universe is a devastatingly beautiful novel about young love and friendship. Featuring a captivating romance and lyrical writing, this book like Boyfriend Material is your next great read!

Have you already read this novel? Check out our list of books like Aristotle and Dante Discover the Secrets of the Universe!

Running with Lions, by Julian Winters

About to head into his senior year, Sebastian Hughes is his high school’s star goalkeeper but before he can go into his final school year, he has to get through summer training camp.

Camp is fine until Emir Shah turns up – Sebastian’s estranged best friend from his childhood. Emir also doesn’t attempt to hide his contempt for Sebastian. For the sake of both their team and for each other, Sebastian is determined to earn Emir’s trust again and build a bridge to make amends.

But spending so much time together proves to ignite something more than friendship between the pair and soon they find themselves in a relationship. In this story of self-discovery, we meet two boys attempting to navigate their way through their teens.

If you love books similar to Boyfriend Material, then try Running with Lions for your next book!

The Princess Diaries, by Meg Cabot

Mia Thermopolis is an ordinary girl in high school. She struggles with fitting in, wants to look pretty and cool to get the popular guy at school and she is also failing her algebra class.

Her life seemed like any other teenage girl’s until she finds out her father is the Crown Prince of Genovia; a small country Mia didn’t even know existed. Now, her life is turning upside down as she is whisked away to Genovia to live life like a royal.

In this book full of royalty and attempting to keep the press out of her life, The Princess Diaries is the perfect easy read for lovers of books like Boyfriend Material.

Damen is the rightful heir to the throne of Akielos but when his brother seizes power, he strips Damen of his identity and sends him to an enemy country as a pleasure slave to the nation’s prince.

Prince Laurent is deadly and manipulative, traits that help him navigate the political webs and intrigue in Vere.

When Damen suddenly finds himself in a play for the throne, he realizes he must help Laurent to survive and save his own country, But Damen cannot ever reveal his true identity as a prince of Akielos to Laurent or he may risk both their relationship and his life.

This highly praised fantasy, Captive Prince is a good read for those looking for books similar to Boyfriend Material.

The Foxhole Court is a perfect book for lovers of books like Boyfriend Material with its romance and fast-paced action.

Neil Josten has lived by many names and lived many lives as the runaway son of the notorious crime lord and murderer, the Butcher.

Now, he is the newest member of Palmetto State University’s Exy team. Signing the team contract is a bad idea with it being so high profile and high coverage. With his face being broadcasted across the country, it is only a matter of time before he gets caught.

However, one of his teammates is someone from his old life who has run away from once before. Maybe it is time to stop running and to finally face his past so he can move on with his future.

Leah on the Offbeat, by Becky Albertalli

Leah on the Offbeat is a sequel to Simon vs the Homo Sapiens Agenda, the hugely successful book and film by Becky Albertalli and perfect for fans of Boyfriend Material.

Daughter to a single mom who already knows she is bisexual; she is yet to tell her friends despite her own best friend’s coming out the year prior.

So, when things in her friend group begin to fall apart, she isn’t sure what to do especially when she realizes her feelings for one of them may run deeper than she first thought.

Tarnished are the Stars, by Rosiee Thor

Tarnished are the Stars is a wonderful fantasy story that explores the sexuality of its characters simultaneously.

Anna works by the name Technician, providing illegal black market medical technology for the sick after the tyrant Commissioner’s laws.

Nathaniel is the Commissioner’s son and has always strived for his respect and affection but soon realizes that his father’s respect isn’t something worth chasing for after meeting the Technician.

Then Eliza turns up, a spy and assassin, looking to learn all the Commissioner’s secrets. The three realize they need to put aside their differences to save their world before the Commissioner gets to them first, all while learning to tell the difference between their romantic and platonic feelings.

A great read for those who love fantasy and loved Boyfriend Material.

Tanner Scott can’t wait to get out of Utah and with only one semester to go of his senior year, the possibility gets closer each and every day. When he moved from California three years ago, the bisexual boy found himself back in the closet.

After his best friend dares him to take a class where the aim is to write a draft of a book in four months, he takes on the class against his better judgement.

There, he meets Sebastian Brother, a Mormon prodigy who sold his own novel the prior year and now helps to mentor the class.

Soon, Tanner finds himself falling in love with the one boy who can’t seem to let himself fall in love in return.

A heartfelt and beautiful story about falling in love, Autoboyography is a perfect book for those wanting a book similar to Boyfriend Material.

All the books above are full of joyful and heartwarming romances that may come with a few bumps along the way. I hope you found a book similar to Boyfriend Material that tickles your fancy.

Are you looking for more books like Boyfriend Material? Have any recommendations that didn’t make the list? Let us know in the comments! 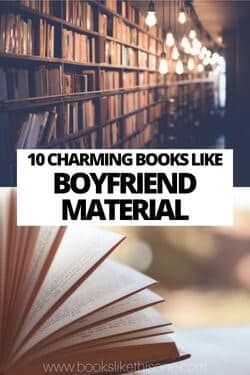