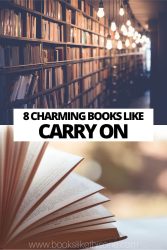 Reading Carry On reminds me of how Terry Pratchett’s Discworld novels would cheerfully mock the human condition but laugh with you, rather than at you. Books like Carry On (and there are a few) make you remember why you enjoy reading in the first place.

Humans are stupid. Like, really stupid. We all know it, but some of us still pretend we’re more important than we actually are. Carry On mocks the chosen one trope that Harry Potter propagates, simultaneously moving into queer romance, a ghost story, and a mystery. It’s hard not to like Simon Snow and his relationship with Baz (a sly smirk at Edward Cullen).

They’re both annoying and likeable at the same time. However, if you’ve already snorted and chuckled your way through Carry On, what other books like it are out there?

The Gravity of Us, by Phil Stamper

Self-doubt? Check. Thrill of first love? Check. Queer romance? Check. All the things a young adult can relate to can be found in books like Carry On.

The Gravity of Us may not have quite the same sense of humour as Rowell’s novel, but it does explore queer identity well. It also highlights just how painful being a teenager actually is; it’s certainly eight years of my life I wouldn’t want to revisit. Yet as you follow Cal and Leon, you can’t help but be drawn in.

Cal has half a million followers on social media and regularly posts about politics and NASA’s newest mission to Mars, which Cal’s father is involved with. Sounds exciting, but the story really gets going when we meet Leon.

The narrative device of a reality TV show to frame the action doesn’t work as well I’d hoped, but The Gravity of Us is still a great read for fans of Rowell’s work.

Books like Carry On zero in on how bad humans can be at communicating their feelings.

Being the son of a famous rock star who’s constantly in and out of rehab for drugs, is tough for Luc O’Donnell. After his dad’s latest stint inside, Luc finds himself back in the public eye which means he needs to clean up his own public image before a compromising photo finds its way to the front pages.

Luc figures a nice normal relationship will do the trick. So, he enters into a fake-boyfriend deal with Oliver Blackwood, a man so boringly normal (barrister, vegetarian, no scandal) that he makes tofu look interesting. Of course, as the two spend more time together, fake dating veers dangerously close to real feelings.

Whilst you can see where the story is going, it doesn’t matter. Boyfriend Material is a great read that helps to normalise queer romance whilst cheerfully poking fun at how dumb humans can be.

This is Kind of an Epic Love Story, by Kacen Callender

Books similar to Carry On love exploring the complexities of queer romance and human frailty. This is Kind of an Epic Love Story treads a fine line between annoying characters and sweet moments of friendship and romance.

Nathan Bird doesn’t believe in happy endings. You can’t blame him. His dad died, and his mom’s a mess. His on-off girlfriend-turned-best-friend wants Nate to find someone else. That someone else comes along in the guise of Oliver, Nate’s childhood best friend and crush (though Nate struggles to admit it to himself.)

Can Nate find the courage to tell Oliver how he really feels?

Well, you can take a guess. What this novel does well, is to show how blurred the line between friendship and romance can be. After all, we’ve all had friends we secretly crushed on when we were younger… didn’t we? <coughs with embarrassment>

The Gentleman’s Guide to Vice and Virtue, by Mackenzi Lee

Monty was born and bred to be a gentleman. Unfortunately for Monty’s father, Monty leads a hedonistic lifestyle, gambling, drinking and waking up in the arms of men and women, often nursing a colossal hangover. And more unfortunately for Monty, his father wants him to take over the family estate.

Faced with this, Monty decides to turn a tour of Europe into one last bender with his best friend Percy in tow. But as the tour turns into one near escape after another, Monty realises his crush on Percy might be more.

Books like Carry On are often filled with adventure, and Monty’s romp around Europe is certainly an adventure. Both for Monty and the reader.

Set in the 18th century, The Gentleman’s Guide to Vice and Virtue serves a timely reminder that the LGBTQ+ community is as old (and as silly) as their heterosexual cousins.

If you’re a queer-bashing narcissist, you probably won’t like any of the books on this list. However, if you’re a decent and kind human being, there is much to enjoy (and laugh at!) in The Gentleman’s Guide to Vice and Virtue.

The Name of the Star, by Maureen Johnson

I was intrigued by Jack the Ripper when I was a teenager… which probably says everything you need to know about my psyche growing up.

Moving on… in The Name of the Star, Jack the Ripper is back and after our hero Rory, who’s just moved to London to start a new life at boarding school.

Rory’s a southern girl from Louisiana and the way she views the city is fun and unique. On the surface, The Name of the Star bears little relation to books like Carry On, but if you dig a little deeper you can spot the connections.

The paranormal/supernatural elements are present and correct. As is a healthy sense of humour about everything in London. Books about Jack the Ripper usually aren’t that funny, but this one is. Well worth a read.

The Upside of Unrequited, by Becky Albertalli

This is technically the second book in Albertalli’s “Simonverse.”

Books similar to Carry On sometimes expect the reader to have a knowledge of the universe they place their characters in, but you don’t need to have read Simon Vs The Homo Sapiens Agenda to enjoy this.

Seventeen-year-old Molly is a pro when it comes to unrequited love. She’s been through it often enough, but mostly because Molly never reveals her feelings to the boys she crushes on. All this changes when Molly’s sister, Cassie, falls hard for a new girl at their school and now Cassie is the one who’s a mess.

But what’s this? Cassie has a hipster-boy friend called Will, and Will looks like perfect crush material for Molly.

Books like Carry On do well in illustrating just how difficult being a teenager feels. The Upside of Unrequited fits in well.

The Marrow Thieves, by Cherie Dimaline

Imagine not being able to dream? This is the premise for The Marrow Thieves.

Books similar to Carry On often lean into the “What if?” scenario that all humans find fascinating, and this is no different.

In the future, people have lost the ability to dream. Global warming has destroyed much of the world and people have gone insane. The one group of people still able to dream are people indigenous to North America. Their bone marrow holds the cure for the world but it comes at a cost: death to the donor.

The Marrow Thieves deals with loss of culture, abuse of power, murder and more. Hard to believe that’s been packed into a YA novel, but Dimaline has done it, and done it well.

This is a great novel to read if you’re looking to learn more about cultural displacement, genocide and just how brutal humanity can be.

The Music of What Happens, by Bill Konigsberg

Everyone keeps secrets. That’s just human nature. There are some things we all keep locked away deep in our minds often because we’re afraid of being judged by others.

Max is a confident gay athlete. Jordan is an odd, willowy emo guy with no self-confidence and a tendency toward melodrama.

Two teens who have absolutely nothing in common suddenly find themselves drawn to each other after Jordan’s (also melodramatic) mother has a meltdown on the food truck the mother and son duo are trying to get up and running to save their home from being repossessed.

Books like Carry On enjoy slamming opposite personalities together, whether it’s Simon and Baz or Max and Jordan. The Music of What Happens is a nice and thoughtful story that is worth your time.

There are so many for those that enjoyed Carry On to recommend. The ones above are just a few that we could think of, but there are countless more.

Are you searching for more books similar to Carry On? Have any recommendations that didn’t make the list? Let us know in the comments! 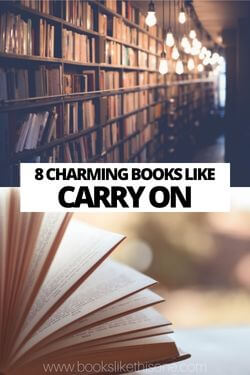