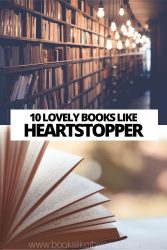 Heartstopper is a graphic novel by Alice Oseman. Originally a webcomic, the story has been published into five physical volumes that you can buy. The fifth and final instalment is expected to be published in 2023 with all other volumes available for purchase.

The story centres around Charlie, a shy and anxious, openly gay boy at an all-boys school. After being outed and bullied in the previous year, Charlie is now in Year 10 and meets a boy in the year above named Nick.

Nick is a soft-hearted rugby lad and the two quickly become friends. Charlie begins to fall for Nick but knows he doesn’t have a chance until maybe… he does? In a surprising turn of events, Nick may have more room for Charlie in his heart than he originally expected. Nick and Charlie are characters from Oseman’s debut novel Solitaire, and other characters throughout the comic also appear in her books.

Books like Heartstopper are brilliant reads but if you have already caught up to date, what else is there? Continue reading for ten similar books to Heartstopper!

In Solitaire, we follow Tori Spring, sister of Charlie from the Heartstopper comics. Tori is a seventeen-year-old sixth former who is juggling A-Levels, mental health issues, family drama and friendships.

A group of pranksters naming themselves Solitaire begins to wreak havoc on her school, their actions becoming more concerning and dangerous.

Tori meets Michael Holden, a strange yet optimistic fellow student who somehow convinces her to join his investigation of this prank group and their motives. As their friendship grows, so does the prank group eventually leading to one big face-off.

If you love Oseman’s writing and specifically want more of Charlie, then pick up Solitaire for a book like Heartstopper.

Aristotle and Dante Discover the Secrets of the Universe is set in the summer of 1987, fifteen-year-old Aristotle meets another young boy, Dante, at their local swimming pool. Dante has a love of literature and art whilst Ari is an angry teen. The pair become inseparable until Dante has to move away for a year.

The two promise to stay friends until they see one another again the next summer. Both boys go through a bumpy year but they know they have each other at the end of the day. If you liked the captivating romance of Heartstopper with the addition of the author’s lyrical writing then you’ll love this read.

Books like Heartstopper know how to capture our attention with the most beautiful and devastatingly real characters and conflict.

Have you already read this novel? Check out our list of books like Aristotle and Dante Discover the Secrets of the Universe!

Laura Dean Keeps Breaking Up with Me, by Mariko Tamaki

This author captures teenage romance and toxic relationships in our youth and brings the characters to life in Laura Dean Keeps Breaking Up with Me.

The story follows Freddy Riley who has had an on-again-off-again relationship with Laura Dean – a popular, funny and pretty girl. But Laura can be mean and Freddy’s friends don’t understand why she puts up with it. Freddy visits a mystic who gives her some advice she is not sure she wants to take but her life is falling apart – something has to change.

Books similar to Heartstopper deal with young love and embracing healthy relationships with others and ourselves.

So This is Ever After, by F.T. Lukens

Books like Heartstopper deal with serious topics in a lighthearted way, including humour and wit, much like So This Is Ever After.

In this fantasy novel, Arek was prophesized to kill the evil leader of the Kingdom of Ere and he has done just that. But now that he’s completed this quest… what next?

Arek and his ragtag companions aren’t sure what is next for them. Matt, Arek’s best friend and mage, convinces him to take up the throne until the rightful heir is rescued until it turns out she is dead and Arek is stuck as king.

The throne comes with a catch too: choose a spouse by your eighteenth birthday or wither away into nothing. With Matt’s help, Arek spends the next three months desperately trying to woo a spouse.

Running with Lions, by Julian Winters

In Running with Lions, Sebastian Hughes is his high school’s star goalie and he is about to go into his senior year. First, he has to get through summer training camp.

Everything is going to plan until Sebastian’s estranged childhood best friend, Emir Shah, turns up who also happens to hate him. Sebastian is determined to make amends with Emir not only for the sake of their team but for each other.

However, earning Emir’s trust again won’t be easy and as the two spend days on and off the pitch together, something more than friendship begins to blossom between the pair. It is often agreed that a good basis for a relationship is friendship.

In this book like Heartstopper, we get to join Sebastian and Emir on a journey of self-discovery and romance.

In Pumpkinheads, a lighthearted graphic novel, we follow a story of two teens who work at a pumpkin patch every autumn working their last night together.

Deja and Josiah are best friends for two months each year and say goodbye on Halloween until the next September. But this year is different; they won’t be returning.

Deja has a plan to make the most of their last shift together whilst Josiah is content in wallowing in his sadness. Taking him on one last adventure, Deja makes sure Josiah won’t ever forget the friendship they formed whilst working at the best pumpkin patch in the whole wide world.

Books similar to Heartstopper are cosy and full of fluff, perfect for a heartwarming, easy read.

The Prince and the Dressmaker, by Jen Wang

In this graphic novel, we explore the ideas of identity, young love and family much like books similar to Heartstopper. In Paris, Prince Sebastian (or rather his parents) is looking for a bride. But Sebastian is more concerned with his alter ego: Lady Crystallia, the biggest fashion icon of the time.

Sebastian owes his glorious dresses to Frances, his best friend and best dressmaker. Frances dreams of fame and recognition for her work but chasing this dream means betraying her friend. She is one of two people who know of Prince Sebastian’s love of dresses but now Frances is stuck between living her dreams and protecting her friend.

The Prince and the Dressmaker is the perfect alternative for those wanting a cute graphic novel to bury their noses in!

Felix Ever After, by Kacen Callender

This young adult novel follows a transgender teen struggling with his identity whilst navigating young love.

Felix yearns for love, after watching everyone around him fall in love for years, he wants a part of the action. An anonymous student begins to send him transphobic messages and Felix creates a revenge plot himself. However, what Felix did not anticipate was for his catfish scenario to develop into a love triangle.

Whilst figuring out what he wants in a relationship, Felix begins to discover some more important things in life; things about himself.

For a book similar to Heartstopper that deals with journeys of self-discovery, pick up Felix Ever After!

If This Gets Out, by Sophie Gonzales & Cale Dietrich

Teenage heartthrobs on camera and best friends off-camera, eighteen-year-olds Ruben and Zac are a part of the four-person boy band, Saturday. As their fame grows, the pressure on the boys begins to grow and Ruben feels increasingly pressured by the band’s management to stay in the closet.

Sent on a whistlestop tour through Europe, Ruben and Zac spend more and more time together until their friendship develops into a romance. The couple realises that despite their own feelings on the matter, their band management will not support them if they decide to come out.

In this book similar to Heartstopper, we delve into the difficulties of coming out as a young teen. For your next great read, pick up If This Gets Out!

For those of you wanting an LGBTQIA+ graphic novel or comic book like Heartstopper then why not try Bloom?

Ari works at his family’s bakery but now that high school is over, all he wants is to move to the big city with his band. Despite his dislike of baking, he loves his family and their dedication to their business so he interviews candidates for his replacement.

It is then that he meets Hector, a boy who adores baking as much as Ari detests it. As the two spend more time together, love begins to bloom and a happy ending emerges in the distance, that is if Ari doesn’t ruin everything.

A story of love, friendship, family and baking, this book will make your heart melt.

Books like Heartstopper warm your heart and make you feel at peace. The books and graphic novels on this list are all the best feel-good stories, most with LGBTQIA+ themes. Pick your next read from the list above and enjoy!

Are you looking for more books similar to Heartstopper? Have any recommendations that didn’t make the list? Let us know in the comments! 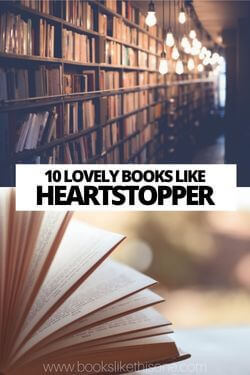