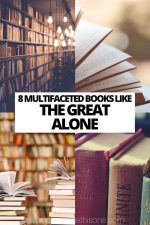 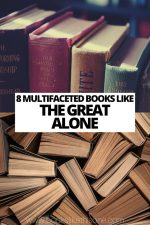 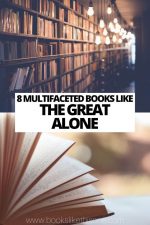 There are many aspects to consider in books like The Great Alone and it is this multidimensional narrative which makes them so enjoyable to read. In the case of Kristin Hannah’s New York Times bestselling novel, she tackles the effects of post-traumatic stress disorder and codependency, she explores love, shame, survival and toxic familial relationships all while giving readers a transportive description of the Alaskan wilderness.

Ernt and Cora Allbright’s marriage had always been charged but it became even more so when Ernt returned from duty and struggled to readapt to life. In a last-ditch attempt at a fresh start, he impulsively moves Cora and their 13-year-old daughter Leni to live off the grid in the wilds of North Alaska.

Initially, this move was just what the family needed but as the seasons change, so too does Ernt’s temperament as his demons start to resurface making life inside their little cabin even more dangerous than the cruel and unforgiving winter raging outside.

If The Great Alone kept you engrossed until the bitter end then check out the titles below which prove equally thrilling reads.

The Giver of Stars, by Jojo Moyes

Following her move from England to small-town Kentucky to be with her new husband, married life isn’t all its cracked up to be for Alice Wright as she finds herself trapped and struggling to readjust to her new role as a wife.

Luckily Alice is able to find some comfort when she becomes part of Eleanor Roosevelt’s mobile library scheme. Here she meets Margery and together with her team they travel round delivering books to people who have never before had the pleasure of reading regularly, but what Alice doesn’t expect is the effect this newfound happiness will have on her marriage.

Known as the Packhorse Librarians of Kentucky the novel is based on true events and explores the powers of love, community spirit, reading, friendship, loyalty, passion and determination as all the women involved thwart convention.

The Giver of Stars has all the makings of a modern classic and is sure to thrill fans of novels like The Great Alone.

The Dutch House, by Ann Patchett

As in books similar to The Great Alone, Ann Patchett’s The Dutch House portrays some complex familial relationships and explores how you first need to let go of past events before it is possible to overcome them.

Set over the course of 50 years, the novel centres around the Conroy family and their home the Dutch House a lavish estate on the outskirts of suburban Philadelphia, which Cyril Conroy purchased as a surprise for his wife, Elna.

Little does Cyril know that this exorbitant gesture will start the undoing of everything and everyone he holds dear, starting with Elna leaving then his two children Maeve and Danny being banished from the house and the wealth they grew up with by his next wife, Andrea.

Told from Danny’s perspective we see what has happened to Maeve and him since their exile into poverty while he continuously draws the reader back into events of the past with an almost nostalgic obsession, describing them with warmth, humour and rage in this dark fairytale for the modern age.

The Signal Flame, by Andrew Krivak

Andrew Krivak’s exquisite novel The Signal Flame touches on the trauma and stress of war, the struggle involved with moving on with life after enduring such tragedy and the strain this puts on your loved ones. Sentiments which are reminiscent of Hannah’s portrayal of Ernt, Cora and Leni making it a stirring read for those looking for more books like The Great Alone.

Though the novel is set between the Easter and Christmas of 1972, at times the narrative travels a lot further back than this, through the generations of two families and their ravaged connection to war and each other. Starting with Jozef Vinich who sought refuge in America to build a new life following World War I, his son’s desertion in World War II and his grandson’s service in Vietnam.

Krivak’s writing is beautiful, his depiction of how a husbands return from war can be just as heartbreaking as if they didn’t is particularly affecting, The Signal Flame is as bleak as it is hopeful, poignant yet powerful, an ambitious novel worthy of the acclaim.

Into the Wild, by Jon Krakauer

If it is the allure of the Alaskan wilderness that has you reaching for books similar to The Great Alone then you may find Into the Wild an interesting read too.

The book is about Christopher Johnson McCandless who, after graduating college ceased communication with his family, gave away his college fund and set off travelling through West and Southwest America on a quest like those of his heroes Jack London, Henry David Thoreau and John Muir.

His travels led him to Alaska where he walked alone into the wilderness only to be discovered four months later by a party of moose hunters who stumbled upon his decomposing body in an abandoned bus. Jon Krakauer retraced McCandless’ steps to try and understand his experiences and the motivations of others like him who have vanished into the wilderness at the confusion to those around them.

A very popular non-fiction book with travellers and those fascinated by the idea of transcendentalism, Into the Wild is a haunting read providing insight into this attraction of leaving life behind and living off the grid, similar in a way to what Ernt was trying to achieve in The Great Alone.

Have you already read this narrative? Check out our list of more books like Into the Wild.

Two by Two by Nicholas Sparks

The New York Times bestselling author Nicholas Sparks delves into the intricacies and complexities of marriage and the bond between parent and child in his novel Two by Two.

From the outside Russel Green has it all; a beautiful wife, a wonderful daughter, a lovely home and a successful career in advertising. On the inside, cracks are starting to appear in the seemingly wonderful life Russ has created.

Very quickly Russ finds himself left alone holding the baby, he loses his job and wife and is catapulted into this new and unexpected reality- single parenting, a role he discovers is as terrifying as it is rewarding.

Two by Two is a powerful and emotionally driven story about the challenges, risks and rewards of loving unconditionally as well as how you have the choice to either sink or swim with whatever life throws at you.

But it is the exploration into the family dynamic which makes it a great choice for anyone wanting to read more novels like The Great Alone.

Despite some controversy and backlash on publication, Jeanine Cummins American Dirt covers a lot of ground providing readers with plenty to consider long after they finish reading.

Lydia Quixano Pérez lives in the Mexican city of Acapulco with her son and her loving, journalist husband. Despite the danger and violent threat of the country’s drug cartels, life for Lydia and her family is nice, or at least it is until Lydia’s husband writes an exposé on one of the newest leaders of the cartel.

Lydia and her son are forced to run for their lives, fleeing towards the American border where the reach of the cartel doesn’t stretch, here they join lots of other people risking everything to escape for a whole host of different reasons.

Cummins’ eye-opening novel explores the problems and dangers faced by migrants seeking refuge, highlighting how they all know what they are leaving behind but have no idea what it is they are running towards literally surviving on the hope that it will be better.

For fans of books similar to The Great Alone who particularly liked the aspect of escaping one’s life into the unknown then American Dirt offers another angle on this.

The Glass Castle, by Jeanette Walls

Next on this list of books like The Great Alone another true story with another dysfunctional family at its heart hoping that travel and pastures new will help resolve past trauma and provide some semblance of normality.

Unfortunately for Jeanette Walls and her family, this did not occur proving once again that you cannot outrun your demons forever.

The Glass Castle is the story of her unconventional and at times turbulent upbringing as she and her siblings were moved from pillar to post by their eccentric parents and the depression, dangers and dysfunction that always seemed to follow them.

Walls writes warmly about her parents despite all the suffering she had to endure at their hands, poignantly describing that even though you may not be able to choose your family, you can choose to leave them behind especially if it is the only chance you have of saving yourself.

The Glass Castle offers insight into the toxic sides of love and how such relationships affect those closest and is very similar to the relationships between the Allbrights in The Great Alone.

Have you already read this memoir? Check out our list of more books like The Glass Castle.

The Impossible Knife of Memory, by Laurie Halse Anderson

Laurie Halse Anderson once again enters the mind in The Impossible Knife of Memory and fans of her previous novel, Speak, will find it equally compelling as will readers of books like The Great Alone.

Andy and his daughter Hayley have lived life on the road ever since he returned from Iraq, trying to outrun his war demons by never staying in one place long enough to dwell on the past. That is until they decide to move to Andy’s hometown so Hayley can attend a proper school and get a proper education.

Hayley is thrilled at the prospect of a normal life and throws herself into school and a relationship with the resident hot guy Finn, as a way to avoid dealing with her own painful memories. This leaves Andy in a bad place of his own as his demons finally catch up with him and force him into a downward spiral which sees him reaching for drugs for help.

Anderson expertly portrays PTSD and how this not only affects those suffering but those around them too. The Impossible Knife of Memory is a gripping, thoroughly surprising novel and truly unputdownable!

Books like The Great Alone demonstrate the skill involved in piecing together a narrative. They include incredible descriptions of settings which lure not just the characters but readers too.

There is an exploration into psychology such as the reverberations of trauma, the effects of toxic love and familial relationships, for example, which help bring the characters to life and how they fit into the intricate plots.

They are all enthralling books, reading them is like mining for gold as you discover more facets each time.

Are you looking for more books like The Great Alone? Have any recommendations that didn’t make the list? Let us know in the comments! 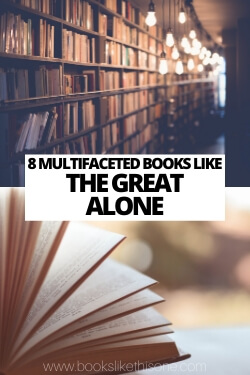