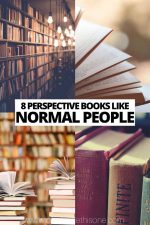 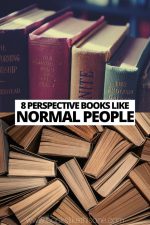 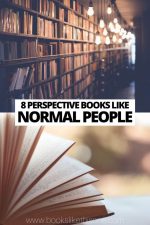 Sally Rooney’s Normal People was the highly anticipated novel that followed her award-winning Conversations with Friends. It was longlisted for the 2018 Booker Prize and is even in the process of being turned into a television series. Because of its acclaim, it left many readers eagerly searching for more books like Normal People.

The novel follows Marianne and Connell, who meet when they are in secondary school and develop an unlikely relationship, that over a number of years blurs the lines between friendly and romantic. The story is perhaps so engaging, so unbearably frustrating at times, because the story is split between two people’s narrations – Marianne’s and Connell’s.

Both characters are so well known because the reader gets to see both of them in the way they see themselves, and the way they see each other. The novels below follow a similar pattern, splitting between two or more narrations and just like in these books similar to Normal People, the stories are stronger for these multiple perspectives.

You Against Me, by Jenny Downham

Jenny Downham is probably best known for her novel Before I Die, making You Against Me a novel that was awaited with bated breath, and it did not disappoint. The novel is split between the point of view of Mikey, the brother of a girl who has been raped, and Ellie, the sister of the boy who has been accused of said rape.

Mikey, desperate to get revenge for his little sister, pursues Ellie, and to his surprise, begins to like her. The pair begin a relationship, without Ellie initially knowing who Mikey really is.

However, when family allegiances get in the way, and the story of that dreaded night begins to twist and turn in its recounting, both Mikey and Ellie don’t know who they can trust, and whether their loyalties lie in the right people. Just as in novels like Normal People, the multiple narrations both lend itself to the storytelling and muddle it up.

One Day, by David Nicholls

One Day is split between the narration of Emma and Dexter, over a period of twenty years, on the same day, July 15th.

The pair meet after they graduate from university, spending one evening together that subsequently begins their lives together, although they don’t pursue one another romantically initially, not in a dissimilar way to Marianne and Connell.

Emma spends her years trying and failing to become a playwright, whilst Dexter travels the world, becoming somewhat of a womaniser. No matter what year it is, the pair stay in touch with one another, if it is only to take a moment in the day to remember each other.

Both of them secretly pine for the other, but somehow the timing is never right, and just as in books like Normal People, the reader is constantly wondering if the pair will ever be able to come together, or if bad timing will keep them apart for the rest of their lives.

Where Rainbows End, by Cecelia Ahern

Cecelia Ahern is a master of romantic comedy, and Where Rainbows End is no exception.

The novel follows a boy and a girl from a young age, in this case, Alex and Rosie. Unlike Normal People, this novel is told through letters, emails and text messages, and sees these two characters through from childhood to middle-aged.

Alex and Rosie, not unlike Connell and Marianne, realise slowly that they are in love with one another, but through a series of miscommunications, they keep missing each other.

Similarly to Normal People, the missed shots these characters have to tell each other how they feel are frustrating, but also have you tearing through the novel, hoping, in the end, these two finally figure things out.

You and I, by Emily Gillmor

You and I follows an extremely similar narrative to Normal People – it centres in on Olive and Tom, who are both in their first year of college at Trinity College, the same place Rooney’s novel is set.

Olive, like Marianne, comes from a family dealing with major difficulties, while Tom is spinning out of control, not unlike Connell.

Tom initially begins his interactions with Olive on a dare but is taken by surprise by how quickly he falls for her, and she for him. But a personal tragedy in Olive’s life tears both their worlds apart, forcing Tom to prove himself to her, and himself.

As in novels like Normal People, the reader gets to understand Tom and Olive as individuals, but also as how they are seen through one another’s eyes, and that is what is most special about novels told in such a way.

He Said, She Said, by Erin Kelly

The reader tries to figure out what married couple Laura and Kit are running from, and why they are so afraid of a woman called Beth.

The book portrays the blossoming of a relationship – for much of it, you’d think we are learning about Laura and Kit’s love story, but this is only a small piece of the story.

When the pair come across a violent crime at a festival, Laura and Kit’s lives are changed forever, and they are entangled in a court case that gets uglier and uglier even after its sentencing.

The secrets are hidden expertly in the narration, proving that only when all sides are shown, is the story really told.

Gone Girl uses the device of multiple storytelling to twist a tale that doesn’t follow a linear path. When Amy goes missing, her husband Nick becomes the prime suspect in her disappearance, despite his insistence that he had nothing to do with it.

Clues begin to build up wherever the police turn, pointing the finger at Nick, and through Amy’s diary, we learn of a marriage that began beautifully but sours over time.

As the years go by, outside influences begin to break apart its foundation. They say in every story there are three sides, his side, her side, and the truth, and it takes until nearly the end of the novel for that third side to come into fruition.

As in books like Normal People, the multiple perspectives are what makes the novel – the story wouldn’t be nearly as engaging without this literary device.

Winning the 2019 Women’s Prize, An American Marriage tells the tale of Roy and Celestial, whose marriage is derailed when Roy is falsely accused of rape.

Despite his innocence, Roy is sent to prison, and though the couple love one another, they find that they cannot withstand the societal glare.

Celestial’s best friend Andre suddenly poses a threat to the pair’s marriage, that was never there before Roy’s incarceration, and through all three of their narrations, a messy love triangle comes to light, and the reader finds it difficult to come to terms with who they want to end up together, and what the right thing really is in this situation.

Like Normal People, the story is made complex by the crossing over of opinions and perspectives; you end up sympathising with people you never thought you would and condemning others you thought you’d understand more.

The Help, by Kathryn Stockett

The Help is the only novel on this list that doesn’t split its narration between a couple, it no less tells a heart-warming and important story about the civil rights movement in the sixties.

Through Skeeter, a white woman who has dreams of being a writer, Aibileen, a black maid who lost her son due to the racism in her area, and Minny, Aibileen’s friend who has recently lost a job as a maid by doing something unspeakable to her employer, the story of how black maids make a living in the 1960s is told.

Skeeter, spurred on by the sudden quitting of her childhood maid, Constantine, finds that she cannot let the issue go, and becomes increasingly disgusted by how her married friends treat their own maids.

She begs Aibileen to help her write a novel about how black maids are treated, despite the fact that they often play more of a role in raising the children of Jackson, Mississippi than their white parents.

As in books like Normal People the story becomes multifaceted with the many narrators, and whether it’s through Skeeter, Aibileen or Minny’s narrations of one another, or the other women they come into contact with, each character is known better like this than they would be through one-person narration.

Set in London in the mid-2000s, Anna Hope’s novel Expectation is an excellent read for those looking for something similar to Normal People. Following a group of three friends as they battle with what adulthood and life has to bring them.

Hannah, Cate and Lissa have been friends since university. After moving to London and living in a share house in Hackney during their twenties, they are now all in their mid-thirties.

Hannah is a high-powered career woman who is struggling with her relationship with her husband after multiple rounds of failed IVF. Lissa is an actress whose career has never taken off in the way she would have hoped. And Cate is living in Kent with her husband and baby, dealing with all of the emotions and isolation that motherhood has brought her.

A deeply personal novel, Expectation is a riveting read that is at times both heartbreaking and funny.

Beautiful World, Where Are You, by Sally Rooney

No list of books like Normal People would be complete without having another Sally Rooney novel, and her 2021 book Beautiful World, Where Are You is an excellent choice.

This novel is told from the perspective of two best friends – Alice and Eileen. Alice is a successful young novelist who has recently moved to a country town in the west of Ireland in order to escape from it all.

Eileen lives in Dublin, is recovering from a breakup and exploring her relationship with a long-term childhood friend Simon. Meanwhile, Alice meets Felix and she must also wrestle with her blooming relationship with him along with her duties as a novelist.

Though you surely do miss Marianne and Connell from Normal People, this wonderful novel is a great way to escape back into Sally Rooney’s unique and poignant storytelling style.

Normal People appears to be a very ordinary tale about a boy and a girl whose timing is consistently off, yet it is much more than that, largely because of how the story is told. This kind of story-telling doesn’t always work, but in the case of these novels it does exactly what it needs to – it provides a deeper understanding of the characters, and it forces the reader to try to understand people they perhaps never would have otherwise.

Are you looking for more books similar to Normal People? Have any recommendations that didn’t make the list? Let us know in the comments! 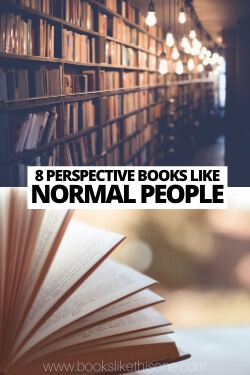