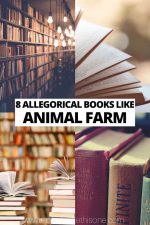 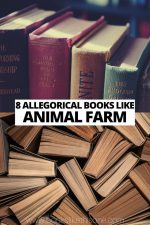 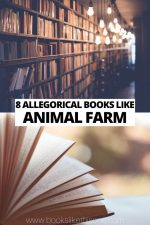 Animal Farm by George Orwell is probably one of the most famous allegorical novels that exists and because of that, many readers are always searching for more books like Animal Farm. Angered by what was happening in Communist Russia, Orwell wrote a novella entitled Animal Farm: A Fairy Story, although the subtitle isn’t often attached to it when it is spoken about nowadays.

The novella tells the story of a farm where the animals believe they are being treated unfairly by their master, Mr Jones. Inspired by the words of the late pig, Old Major, the animals rise up against Mr Jones, taking over the farm in hopes to run it in such a way that is fair – but with all uprisings, this is not exactly what happens.

The story is a piece of political satire, warning against the dangers of Communism and totalitarian states, which were quickly becoming a trend in Europe with the likes of Fascist Italy and Nazi Germany coming to power. The following novels do what all allegorical novels, as in books like Animal Farm, should; presents a moral or political idea wrapped up in a fictional story that delivers a message to its readers.

Written during the 1950s, at the height of McCarthyism in America, Bradbury explores the dangers of rejecting knowledge in his dystopian novel Fahrenheit 451. The novel focuses on fireman Guy Montag, who lives with his wife and is employed to burn the belongings of those who refuse to stop reading outlawed reading material.

After meeting with a teenage neighbour called Clarisse, who is liberal and much more free-thinking than himself, Guy begins to question his career and finds that he longs to have more conversations with his new friend. ‘

However, this world does not welcome the liberal and their radical thoughts, and Guy becomes even more uneasy with his role in the world, seeking out small rebellions wherever he can. Bradbury comments on the dangers of book burning in this novel – during the McCarthy years there was an outlaw of certain books and ideas that was reminiscent of Nazi Germany, where there were literal book burnings to dispel certain strains of thought, and even to erase history to an extent.

Bradbury’s allegory in Fahrenheit 451 emphasises the importance of literature and the necessity of remembering the past. As in novels like Animal Farm, this allegory is somewhat used as a tactic to scaremonger and it is successful in this.

Written in 1954, when the Cold War was brewing between the USA and Russia, Golding’s novel examines the anxieties of society at the time in a post-war world.

With the superpowers seeming capable of mass destruction through atomic means, the novel serves as a cautionary tale. In Lord of the Flies, a British aeroplane crashes into the Pacific Ocean, with the only survivors being a group of young boys who make it onto an island and must learn how to govern themselves effectively.

This novel is a political, psychological and religious allegory – the boys seem to have been set in the Garden of Eden, as there is enough on the island for the boys to survive, if only they follow the rules. Chaos ensues as the boys struggle to follow a democracy, and factions break out amongst them.

A classic novel and a good follow up if you liked Animal Farm, Lord of the Flies depicts where the world could end up if they don’t stop with their fighting and come to a compromise.

The surface story to Never Let Me Go is about three friends who grew up in a boarding school together, where they have always been told they are special, but have not totally understood why.

In Ishiguro’s dystopian novel, we follow Kathy and her friends as they discover they have been created, clones, in order to donate their organs to “real” people, and will “complete” or die, in and around their early thirties as a result of these donations.

On the surface, this seems like a terrifying piece of science fiction, however, when you delve deeper, you discover it is an allegory for how regular humans in the real world live their lives – we all know we will die one day, and though the clones’ lives are significantly shorter, they live it in much the same way we do.

They love, they laugh, they think of the past too much – there’s the question, do they make enough of their lives? Do we? As in books like Animal Farm, we are forced to wonder about very real truths these novels represent.

Similarly to many novels on this list of books like Animal Farm, there are elements of magical realism in Frankenstein. The novel represents the struggle between science and religion in the 19th century and is an allegory for the fears people had about where science could lead.

Doctor Victor Frankenstein, obsessive about science since he was a child, uses experimenting as a coping mechanism when his mother dies. Through such experimenting, he discovers his ability to force life into dead matter, which leads to his greatest test yet; creating a living human.

Frankenstein is successful, yet his creation is not what he imagined, and when it wakens, he is horrified by what he has done. The inner turmoil of Frankenstein, as well as his monster, rings of the fears amongst British society at the time, much as books like Animal Farm.

The Chronicles of Narnia: The Lion, The Witch and The Wardrobe, by CS Lewis

Any of the novels in the Chronicles of Narnia series would make it onto this list, but The Lion, The Witch and The Wardrobe is the best known and deals with anxieties about good and evil. Lewis did not write this series as allegory, but nevertheless it is considered one, with certain characters being seen to obviously represent people from the Bible.

During World War II, four children are evacuated during the Blitz to the English countryside, where they amuse themselves by exploring the house of the professor who has taken them in. While playing hide and seek, the youngest, Lucy, stumbles into a wardrobe which leads her to the magical world of Narnia.

Eventually, she convinces her siblings to accompany her, where they unknowingly get caught up in a war between the White Witch, the epitome of evil, and Aslan, the epitome of good. The novel has several scenes of biblical imagery, as well as portrays scenes that are reminiscent of Nazi Germany and the SS, in the form of the wolf army and how Narnia under the reign of the White Witch, has become a totalitarian state.

In many ways, Aslan represents Jesus, who dies for the sins of his followers, while the White Witch can be seen to embody the Devil. Even in Edmund’s betrayal, he is reminiscent of Judas. The tale appears to be an allegory for how good triumphs over evil, even when it seems unlikely to. A great read if you liked Animal Farm; it uses talking animals and elements of fantasy fiction to accomplish its message.

Allegory often addresses our fears, and Bram Stoker’s Dracula is no exception. The 19th-century novel delves into the fears society had about the forces of good and evil, God and the Devil, not dissimilar to The Chronicles of Narnia.

When lawyer Jonathon Harker travels to Transylvania to meet with Count Dracula about purchasing land in England, he soon discovers there is something supernatural about the Count, finding that he is the personification of evil itself, requiring the blood of others to survive.

After Count Dracula infiltrates the mind of Jonathon and his fiancée’s good friend Lucy, a team of people must come together to stop him. The novel often uses Catholic symbols as defence mechanisms against the Count and his vampiric control, including crucifixes, rosaries and consecrated hosts, and it backs up the idea that being a good Christian will deliver you from the forces of evil.

It also comments on the alien and unknown – Dracula himself embodies this notion and the fear that he is something science cannot defeat. As in novels like Animal Farm, this novels warns of the dangers of evil, though in Orwell’s novel the danger is communism, and in Stoker’s, it is sin and the devil.

A Christmas Carol, by Charles Dickens

Charles Dickens’ A Christmas Carol is one of the most famous allegories there is – it is not difficult to decipher the hidden message behind the novella. Ebenezer Scrooge is a grumpy old man who personifies everything that Christmas should not be about – selfishness and greediness.

The novel is all about Christmas, and what Christmas should be about, which is family and giving, and is similar to Animal Farm in the sense that it portrays what we don’t want for ourselves.

F. Scott Fitzgerald wrote The Great Gatsby in 1925, in the golden Jazz Age and when prohibition was at its peak, having the rebound effect of making liquor cheaper. Like many of the other novels on this list, this is a cautionary tale about the dangers of the American Dream, and the truth about the glitz and glam in the roaring twenties.

Nick Carraway comes to New York to work on Wall Street, although he had dreams of becoming a writer. He moves in next door to the elusive Mr Gatsby, whose parties are legendary, pulling in all forms of life in New York – most people have never even met Mr Gatsby. But he is very real and needs help from Nick with something only he can provide – an invitation to tea with his cousin Daisy.

This novel explores the depths of human selfishness, greed and allowing yourself to be sold to a dream. Like in Animal Farm, where the new regime run by Napoleon and Snowball has consequences for all, New York in this age of excess and hyperactivity shows Nick who people really are, eventually chewing him up and spitting him back out again.

Allegory is an interesting literary tool – does the author need to intend for the novel to be allegorical for it to be perceived this way? In books like Animal Farm, the intent is clear, as Orwell tries to clearly expose the dangers of communism, and how it has already created so much damage.

Are you looking for books like Animal Farm? Have any recommendations that didn’t make the list? Let us know in the comments! 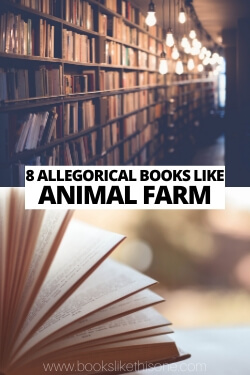