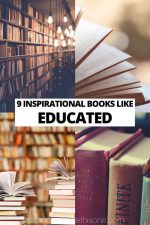 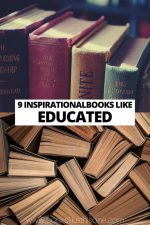 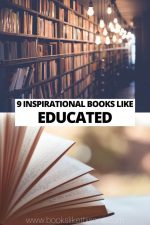 Nothing is more inspiring than reading about another person’s triumphant journey over adversity, beating the odds stacked against them in order to succeed and books like Educated, a memoir by Tara Westover, is an example of just that. Born into a Mormon fundamentalist family where the millennium, hospitals and the public school system were feared, among many other things, Westover describes her unconventional, isolated and at times violent upbringing.

Fortunately, her thirst for knowledge and discovery was far greater than her desire to remain trapped within the confines of her family. Having never set foot in a school or college until she was 17 years old, we witness Westover’s perseverance as she eventually gets accepted onto a PhD program at the prestigious Cambridge University, Educated chronicles her troublesome journey to fit into the wider world.

The list compiled below are stories, both real and fictional, based on overcoming challenges and setbacks with the help of vices like art, literature, education, love or just blind determination which makes the novel’s featured here on this list of books like Educated truly remarkable reads.

I Know Why The Caged Bird Sings, by Maya Angelou

In her autobiography, I Know Why The Caged Bird Sings, Maya Angelou describes the early years of her life. A turbulent journey which recounts how she overcame the trauma of being a victim of violence, rape and racism to become the strong and dignified woman, able to stand up for justice, that we remember today.

In Angelou’s real-life coming-of-age story, she shares details of the years spent living with her grandmother in Arkansas amidst periods of racial unrest, her sexual abuse at the age of 8 at the hands of her mother’s boyfriend and her struggles with identity and sexuality.

Like Westover, Angelou found solace in books, as they helped her cope and eventually overcome the traumas she had endured. It was the power of words which inspired her to go on to become one of the most influential writers, poets and civil rights activists of our time, I Know Why The Caged Bird Sings is a landmark book and the perfect start to this list of books like Educated.

Oranges Are Not The Only Fruit, by Jeanette Winterson

The author Jeanette Winterson grew up in an incredibly religious Pentecostal community in Accrington in Lancashire, her semi-autobiographical account Oranges are Not The Only Fruit is an exploration of family, same-sex relationships and religion.

A young Winterson believed she was destined to be a missionary, having been adopted by Evangelists. But when she becomes attracted to another girl she ends up questioning everything as they both face prejudice even exorcisms from the religion they thought they were destined to serve.

Winterson’s is a tale of identity, finding somewhere to belong and most importantly love, she has since written a corresponding account of this period in her life in her 2011 memoir Why Be Happy When You Could Be Normal?

Winterson wasn’t afraid to stand up to her family or religion for who she is and who she loves which is why Oranges Are Not The Only Fruit is a thoroughly captivating read for those looking for more books similar to Educated.

Prayers For The Stolen, by Jennifer Clement

Jennifer Clement paints an illuminating portrait of women in Mexico in her deeply affecting novel Prayers for the Stolen, the first book of fiction on this list of novels like Educated.

Ladydi García Martinez is the novel’s fierce and funny heroine. She is growing up in an environment where the men are sent away to work and the women have to fend for themselves, where school is sporadic and escape is rare, where drug lords are king and being a young, beautiful girl is a death wish. This is life for her and many others trying to survive in the mountains of Guerrero in Mexico.

Ladydi and her friends aspire to live a life that holds more promise than just mere survival so when she gets the chance to leave she seizes the opportunity with both hands. Prayers for the Stolen is a story of love and perseverance, Clement has created an absolutely unforgettable heroine in the form of Ladydi whose tenacity and resilience brings hope to the potentially soul-destroying situation and is what gives the novel it’s allure.

First in the line of several memoirs inspired by events occurring in his life, Frank McCourt’s Pulitzer prize-winning Angela’s Ashes is as heartbreaking at times as it is humorous at others.

Literally born into depression, McCourt recounts a childhood being raised in and around the slums of Limerick in Ireland as his mother and title name of the memoir, Angela slowly slips deeper and deeper into her own depression and despair following the death of three of her children.

Malachy, McCourt’s father is an alcoholic and unable to hold down a job which does little to improve their familial situation either. Angela’s Ashes is a story of hope and imagination amidst ultimate misery as McCourt recalls the poverty, starvation and cruelty he had to endure with commendable eloquence and unbelievable forgiveness.

A real-life rags-to-riches tale, Angela’s Ashes has all the ingredients to make a truly aspirational masterpiece and a worthy addition on this list of inspiring books like Educated.

Though fiction and criticised for its self-help and philosophical implications, Paulo Coelho’s The Alchemist has been an inspiration to many to pursue their dreams and overcome obstacles, which is why it is perfect for anyone looking for more books similar to Educated. Initially published in 1988, The Alchemist has since become a vastly translated international bestseller.

The novel follows Santiago, an Andalusian shepherd on his journey to find a wealth of treasure at the pyramids of Egypt. Prompted by a prophetic and recurring dream, he sells his flock and starts his pilgrimage to Africa where he gets robbed and risks his life all in the name of destiny.

The novel is allegorical and this notion of realising ones ‘personal legend,’ the dream or goal that you have always wanted to accomplish, is consistent throughout the narrative that it is no wonder that so many people have been left uplifted and motivated after reading Coelho’s poignant novella.

How Starbucks Changed My Life, by Michael Gates Gill

The story of Micheal Gates Gill in How Starbucks Changed My Life is an interesting one as it is almost back to front in telling compared with the other titles appearing on this list of novels like Educated.

Michael Gates Gill had it all in his fifties: an Ivy League education, a mansion, a loving wife and family and six-figure income, on paper he was successful. By the time he was sixty he had lost his job, his marriage and his health, with no money left and no health insurance he was forced to get a job in Starbucks.

Michael Gates Gill’s memoir is a touching chronicle of what he learnt about life and the world working there; how kindness can reach across race, age and class divisions, how prejudice, no matter how ingrained, can be erased and how privilege doesn’t guarantee a happy life among many, many other things.

Now optioned by Tom Hanks for a motion picture How Starbucks Changed My Life and Michael Gates Gill’s experiences will continue to positively influence people for years to come.

Creativity as a route to healing, self-reflection and acceptance are themes consistent throughout Janet Finch’s 1999 novel White Oleander, a fictional story about one girl’s quest for love and acceptance.

Following Astrid Magnussen’s manipulative mother being imprisoned for shooting her boyfriend in a jealous fit, we see Astrid’s tumultuous experiences at different foster homes. Over the course of the novel, Astrid stays with 12 different families where she becomes the subject of a predatory relationship in one, develops an addiction to drugs in another and bears witness to more violence, suicide and murder in the rest.

Luckily she is able to find solace in art and is slowly able to revisit her past, revealing her story through old suitcases which she transforms into individual pieces of art to represent the 12 foster homes she had to endure, only then can she truly move on happily with her life.

If you like the elements of overcoming the dysfunctional in Educated then you will be incredibly moved by White Oleander too.

A Good Wife: Escaping The Life I Never Chose, by Samra Zafar

As a young girl, Samra Zafar dreamed of independence, of going off to university and forging her own path in the world. This dream was snatched out of reach when at 17 years of age she was forced into an arranged marriage, A Good Wife is her memoir detailing her escape from a life forced upon her and into the one she always wanted.

Zafar’s husband was emotionally and physically abusive, her life in Canada with him was a far cry from where she grew up in Pakistan. After years living as a prisoner, she eventually hatched an escape plan for herself and her two daughters risking cultural and familial isolation in the process.

But Zafar’s sheer determination and defiance was worth it, she has now fulfilled the academic achievements that she always wanted, become a public speaker, mentor and role model not just to her daughters but to young girls everywhere inspiring them to never give up on their dreams.

Zafar’s fight for freedom and quest for education echos Westover’s own struggles, so if you liked Educated, you are sure to find A Good Wife a thoroughly gripping and worthwhile read as well.

Between Shades of Gray, by Ruta Sepetys

Based on stories the author, Ruta Sepetys, heard about the genocide during the reign of Stalin in the 20th Century, Between Shades of Gray is an unflinching account of the lesser-known brutalities of the war.

The courageous and artistic Lina Vilkaitè is the novel’s 15-year-old protagonist whose family is thrown into turmoil when Soviet Officers barge into her home one day. Lina, along with her brother and mother, are taken to a labour camp in Siberia where, by the order of Stalin, they are forced to dig for beets.

Despite the cold, brutal, harrowing conditions, Lina continues to find comfort through her art and documents her life and the violence happening around her in pictures at great risk to herself. Between Shades of Gray is a story of immense hardship and human triumph as Lina’s unwavering strength and unfaltering love helps her to survive.

Sepetys debut novel was an immediate New York Times bestseller, it is raw, brutally honest and thoroughly compelling therefore it is a must-read for anyone looking for more books like Tara Westover’s Educated.

Books, be it biography or fiction, should make you feel something and this list of books like Educated will certainly do just that. These thought-provoking tales of human endurance will take you on a rollercoaster of emotions that will stay with you long after you have finished the last page.

Are you looking for more books like Educated? Have any recommendations that didn’t make the list? Let us know in the comments! 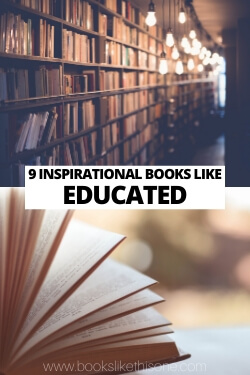