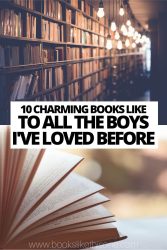 There is nothing like finishing heartwarming romance books like To All the Boys I’ve Loved Before by Jenny Han.

We can all relate to the giddiness of having a childhood crush or three, like Lara Jean. Having never openly admitted her feelings to her crushes, instead Lara Jean wrote her feelings down in handwritten letters.

Keeping the box of letters hidden under the bed, she never imagined the letters to be read by the recipients of her attention until somehow the letters are mailed to all three crushes.

Lara Jean has to face her first kiss, the boy from summer camp and her sister’s ex-boyfriend and finds that navigating her romantic and familial relationships will be harder than she expected.

Now adapted into a hugely popular Netflix film series, To All the Boys I’ve Loved Before is touching and feel good. If you’ve already read this book, you are probably looking for something similar to sink your teeth into. Read on for some great recommendations!

10 Books like To All the Boys I’ve Loved Before

Theodore Finch and Violet Markey meet on the ledge of the bell tower and inadvertently save each other. Violet cannot wait to leave their small town and is grieving her recently deceased sister.

Finch, on the other hand, is consumed with the idea of death and the peace it could bring him but every time he gets close to leaving, he stops.

The pair realize they can be themselves with each other and for Violet, things begin to look up but for Finch, he begins to struggle more and more. Finch and Violet are an unstoppable pair but is their friendship enough to save Finch a second time?

For a more poignant and intense story than books like To All the Boys I’ve Loved Before, check out All the Bright Places.

Anna and the French Kiss, by Stephanie Perkins

Books like To All the Boys I’ve Loved Before are full of fluff much like the Parisian-set novel Anna and the French Kiss.

When Anna gets sent off to a boarding school in Paris after awaiting her senior year in Atlanta, she is less than pleased. Leaving behind a best friend, a crush and a job she loved, she knows Paris will be the worst.

Until she meets Etienne St Clair and things begin to look up.

The only thing in the way is his long-term serious relationship with another girl. Spanning their senior year, we follow Anna and Etienne on a rollercoaster journey and we are left wondering if Anna will get her French kiss.

Have you already read this novel? Check out our list of books like Anna and the French Kiss!

This is Kind of an Epic Love Story, by Kacen Callender

In This is Kind of an Epic Love Story, film buff Nathan has sworn off happy endings and romance after seeing too many relationships fall to pieces and recently watching his mum fall apart after his father’s death. Love is simply not worth the pain.

His decision is tested when his former best friend, Oliver, arrives back in town. His ex-girlfriend slash best friend Florence is convinced Nate should tell Ollie the truth about his feelings after an awkward mix-up years before.

In this charming rom-com book similar to To All the Boys I’ve Loved Before, Kacen Callender explores the blurry line between romantic and platonic love.

The Upside of Falling, by Alex Light

If you like the fake dating trope in books like To All the Boys I’ve Loved Before then The Upside of Falling should be the next book you read!

Becca Hart announces to the school that she has a secret boyfriend after her former best friend teases her over her lack of a boyfriend. Brett Wells is popular, captain of the football team and has no date for prom.

He is more concerned with working hard for his future than dating but his teammates won’t stop teasing him about who he is going to bring on his arm.

Overhearing Becca’s lie about secretly dating someone, it seems like a perfect situation that works for the both of them. With both their lives falling apart, their fake relationship suddenly starts feeling like the most real thing they have.

Definitely consider reading this novel for an endearing and amusing story that fans of Jenny Han will love.

Have you already read this novel? Check out our list of books like The Upside of Falling!

The Sun is Also a Star, by Nicola Yoon

The Sun is Also a Star follows Jamaican-American Natasha and Korean-American Daniel, two teenagers in New York. The two meet and fall in love on the day Natasha is supposed to be deported to Jamaica.

Spending as much time as possible together and getting to know each other, they begin to change each other’s lives for the better. In this novel, time is of the essence and the impact they will leave on one another will last a lifetime.

If you liked To All the Boys I’ve Loved Before then you’ll love The Sun is Also a Star!

Have you already read this novel? Check out our list of books like The Sun is Also a Star!

Despite having a not so successful familial dynamic, Pepper’s family owns a huge and booming fast-food chain. The popularity is mainly down to Pepper secretly running the Big League Burger’s Twitter account whilst juggling her own priorities.

Jack works at his family’s deli so when his grandmother’s iconic cheese toasty recipe is stolen by Big League Burger, he’ll do anything to bring them down. Pepper and Jack begin a viral Twitter war whilst also falling for each other on an anonymous chat app that Jack designed.

For a fresh rom-com book similar to To All the Boys I’ve Loved Before, read Tweet Cute!

For a comic con twist on the classic tale of Cinderella, you should pick up Geekerella.

Elle Wittimer is obsessed with the show Starfield and considers herself one of its top fans so when a cosplay competition is announced, she enters. The prize is an invitation to ExcelsiCon Cosplay Ball and a meet-and-greet with the upcoming reboot’s teen actor, Darien Freeman.

Elle wants to win but her step-sisters might just get there first. Darien, on the other hand, has wanted to play Carmindor for years but the Starfield fandom has decided he’s just another pretty face. As the convention grows nearer, Darien feels more and more like a fake until he meets Elle.

For a nerdy romance that will give you the feels like To All the Boys I’ve Loved Before, Geekerella is the book for you!

The Selection, by Kiera Cass

For a romance book like To All the Boys I’ve Loved Before that is set in a dystopian world, try reading The Selection.

Thirty-five girls get the chance to be swept up into a world of ballgowns and tiaras whilst competing for the heart of Prince Maxon. It is usually a girl’s dream to be selected but for America Singer, being a part of the Selection is not what she wants.

Leaving her home and her secret love, America soon meets the prince and realizes everything she imagined for her future may have to change.

The Summer of Broken Rules, by K.L. Walther

Every summer Meredith Fox has visited Martha’s Vinyard but this year will be the first without her sister after her tragic death. To add on top of the stress, her entire family will be there for her cousin’s wedding and her boyfriend dumped her two weeks before.

Dateless, Meredith is glad for the family’s tradition of playing Assassin and her target this year is one of the handsome groomsmen.

Despite telling herself not to fall for the cute guy, as the week unfolds, she may just have to let herself take the step back into the dating world but is she willing to let the chance to honor her sister’s legacy and win the game of Assassin pass by?

Much like To All the Boys I’ve Loved Before, The Summer of Broken Rules is an entertaining read full of slow burn romance.

Breaking the usual conventions of a romance novel, Holly Bourne writes an empowering, humorous and realistic novel in It Only Happens in the Movies.

Audrey isn’t feeling the most optimistic as she is dealing with her parent’s divorce, her own breakup and changing friendships. Romance isn’t on the cards for her until she meets a new co-worker, Harry.

Harry is charming and a bit of a flirt but Audrey can’t seem to resist getting to know him. Audrey knows a ‘happily ever after’ may not be on the cards for the pair but she knows she will regret the choice not to find out.

In this clever novel that gives a down to earth view on romance and relationships, it is the perfect choice for fans of books like To All the Boys I’ve Loved Before.

The novels that make up this list of books like To All the Boys I’ve Loved Before can make you feel like you are re-living your first love all over again. Containing irresistible love interests and witty friendships, we follow the heroines on a quest for romance, friendship and more. I hope this list has added more notable authors to your radar!

Are you looking for novels similar to To All the Boys I’ve Loved Before? Have any recommendations that didn’t make the list? Let us know in the comments! 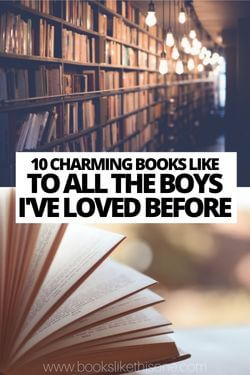