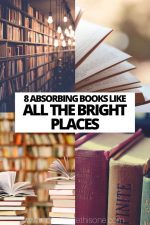 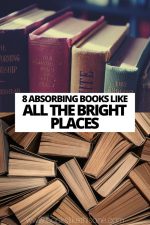 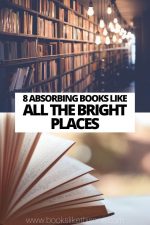 Books like All the Bright Places by Jennifer Niven have us emotionally seesawing from high to low, then back again – and, for many of us, that’s what makes a great story.

The two main characters in All the Bright Places are both struggling with mental issues: Violet is trying to escape the guilt of surviving a car crash that killed her sister and Theodore is preoccupied with death – especially his own.

The two meet on the ledge at the top of the school bell-tower and after talking to each other, they decide not to jump. They form a connection which is strengthened when they get involved in a joint project about the natural wonders of their state. It becomes clear that Theodore can be his weird self when he’s with Violet and she begins to live her days instead of wishing them away.

This absorbing and heart-wrenching story about the power of friendship will have you searching for more novels like All the Bright Places and it just so happens I have some excellent examples for you to choose from.

For my first book like All the Bright Places, I’m going to begin by unashamedly suggesting Niven’s 2016 book, Holding Up the Universe. One of the centring thoughts we have as adolescents is how we fit in with everyone else. This poignant and beautiful story is about that very subject.

Libby Stout is fat (with an unfortunate surname) – but that’s her body shape, it’s not who she is. She has spent years nursing her and her father’s grief after losing her mother but now she’s ready for a change. With high school comes the opportunity to find friends, first love and maybe some adventure.

Jack Masselin is confident and charming and knows how to ‘fit in’ but he has a secret: he can’t recognise people’s faces – not even his own family.

When Libby and Jack both end up in a counselling group and having to do community service together they slowly create a bond that neither was expecting.

This relatable and heartwarming story will leave you smiling and looking for other books similar to All the Bright Places.

The young girl in this book like All the Bright Places has recently committed suicide and she wants the people she blames for her demise to pay – even if it’s only emotionally.

Hannah Baker has sent a box of audiotapes to her friend Clay Jensen; they contain her list of the people she considers contributed to her suicide. He has to listen to them to find out if he is on the list and if so why. Hannah has instructed that he should listen and then pass them on to the next person.

We find out, through Clay’s narration, the names on the list and what part they played in contributing to Hannah’s state of mind.

In May 2017, the curriculum director of a school in Colorado ordered librarians to stop circulating the book due to a rash of student suicides. Apparently it wasn’t banned though and maybe that was because Thirteen Reasons Why doesn’t glamorise suicide, it’s just taking a look at how a culmination of seemingly unconnected incidents can build into something powerful enough to affect someone’s mental state.

Be Not Far from Me, by Mindy McGinnis

Often as we’re moving into adulthood, we’re not exactly sure where we belong in this world but our heroine in this book like All the Bright Places knows that she is more at home when in nature than anywhere else.

Most YA books are about enduring the trials of adolescence; this is a survival tale of the literal kind.

When Ashley and her friends decide to go for a night of partying in the Smoky mountains, things take a turn for the worse and Ashley finds herself alone and injured.

The author’s writing is visceral and will have you hunching your shoulders and pulling yourself inwards as Ashley has to go through some gruesome situations in order to survive.

This is a story of how powerful the mind can be during adversity. So, if the threat of the Coronervirus has you in survival mode then read Be Not Far From Me to make you grateful to be stuck indoors.

Miss You Hate You Love You Bye, by Abby Sher

If you’re looking for other books similar to All the Bright Places then Miss You Hate You Love You Bye should be on your list of possible purchases. Following the theme of adolescent mental health, this book deals with the delicate and often misunderstood subject of Bulimia.

Hank (Hannah) and Zoe have been BFFs since elementary school. Zoe is confident and popular and Hank is happy to be in the background of Zoe’s life – until Zoe’s parents announce that they are getting a divorce. Her world begins to collapse and her confidence with it. She develops an eating disorder and Hank has to figure out how to ‘step up’ and help her friend before she self-destructs.

This story about the strength of friendship through our teenage years will have you hugging your own best friend – just because.

Turtle Under Ice is unusual as the author has chosen to write it in free verse narrated by each of the sisters in the story.

Rowena and her older sister, Ariana, are dealing with the trauma of losing their mother. Row has friends and loves to play soccer but Ariana is quiet and has few friends. They drift slowly apart as sisters can often do in such circumstances.

One day, Ariana leaves in the night without saying a word to anyone and Row wakes up to find she is missing and no idea where she has gone. This is the start of Row’s journey to find out where her sister disappeared to and why she left without telling her.

The story is told over a single day and explores the bond between sisters and dealing with grief.

If you enjoyed All the Bright Places then I would spread your literary wings and try Turtle Under Ice.

The main thread running through The Perks of Being a Wallflower is the question ‘Why do decent people let themselves be treated so badly?’ In this book similar to All the Bright Places our hero, Charlie, is given the answer ‘We accept the love we think we deserve’.

Charlie’s story is about his emotional turmoil as a freshman in high school. He is used to watching life from the sidelines but then he meets Sam and her stepbrother, Patrick. Sam becomes the focus of Charlie’s life, which is about to tear him away from the wall and into a world of first dates, drugs, sex and teenage drama.

Charlie tells his story through intimate letters he writes which he never sends to anyone.

If you enjoy novels like All the Bright Places then you’re going to love The Perks of Being a Wallflower.

Already read this novel? Check out our list of more books like The Perks of Being a Wallflower!

It’s hard to write about YA authors without a John Green novel being present on, and in this list, I give you Paper Towns.

Protagonist, Quentin Jacobsen has a crush on his neighbour, Margo. Nine years ago they discovered the body of a man who had committed suicide in their local park but although they go to the same school, they don’t remain close as they move in very different circles. Until one day when Margo climbs through Quentin’s bedroom window to ask for his help.

Margo asks him to help her pull off a plan of vengeance she has for several people who have hurt her. Quentin agrees as he wants to be close to her but later she is reported missing and through clues she has left him he travels to where she is hiding.

Unfortunately, she is not happy to see Quentin; she only left him clues so he would know she was OK.  She accuses him of wanting to be her knight in shining armour; therefore his ‘rescue’ is really all about him.

Being in love during adolescence, whether it’s reciprocated or not, can fill your whole world but in this novel like All the Bright Places, Quentin has to come to terms with the fact that maybe Margo isn’t the ‘perfect’ person he sees in his head.

If you’re a fan of John Green and are searching for more books like All the Bright Places then grab a copy of Paper Towns.

Love John Green novels? Check out our lists of books like The Fault in Our Stars, books like Looking for Alaska or books like Paper Towns!

Patron Saints of Nothing, by Randy Ribay

This novel I have selected like All the Bright Places is about one Filipino-American boy’s search for the truth about how his cousin died.

When high school senior Jay Reguero hears about the death of his cousin, Jun, he is suspicious of the circumstances in which he died and is convinced that there is more to his death than he’s been told. He travels from his home in Michigan to the Philippines where the realities of the politics regarding the drug wars leave him shocked and shaken.

On his journey, Jay learns about his family, his culture and his country – ultimately his own identity.

This thought-provoking novel about Duterte’s war on drugs in the Philippines is written with honesty and sensitivity. So if you’re looking for a book similar to All the Bright Places then enjoy a copy of Patron Saints of Nothing.

Writing a work of fiction that contains controversial views is a double-edged sword; some readers are going to be outraged, but ultimately these are the stories that need telling and the ones that usually make best sellers. I hope this absorbing selection of books like All the Bright Places has sparked an emotive reaction in you either way.

Are you looking for more books like All the Bright Places? Have any recommendations that didn’t make the list? Let us know in the comments! 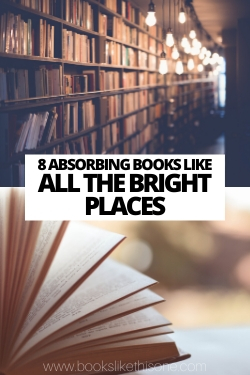