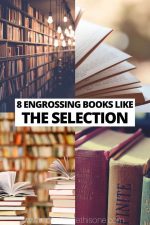 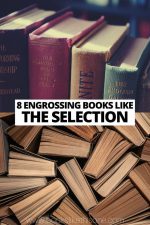 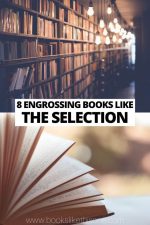 It is hard not to trip over a successful YA novel these days. However, people may feel personally about the genre, there is no denying the huge impact it continues to have on popular culture which has many people searching for more books like The Selection.

Stories about class and people’s place in society are nothing new and The Selection by Kiera Kass is on the surface, just another Cinderella-esque story about a poor girl finding her way to true love in an unequal society.

However, Kass’s heroine ‘America’ is slightly different and offers young readers a chance to begin questioning their own place within a system often rigged to favour the few over the many.

If you have already read Kass’s novel and are looking for similar titles then check out these books!

8 Books Similar to The Selection

Delirium represents the tip of an iceberg if you’re looking for more books to read after The Selection.

Published in 2011 (one year before Kass’s novel hit the bookshelves) Delirium asks a question that philosophers have pondered for centuries; what if love is a disease?

In Oliver’s dystopian future, the ruling totalitarian government of the former USA labels love as ‘Amor deliria nervosa’ commonly referred to as ‘the deliria’.

Of course, a cure is available and enforced upon citizens when they turn 18. Protagonist Lena’s journey from looking forward to receiving the cure to where she ends up is enjoyable to read.

Lena’s interactions with Alex, an ‘Invalid’ who hasn’t taken the cure and lives out of society at first seem predictable.

However, the moment Oliver moves the story beyond merely ‘romantic’ love, things become a lot more interesting. ‘Love’ in the YA genre is often associated with romance and whilst that element is present here, it does not override the question we all ask ourselves from time to time; what does love mean for different people?

Books in this genre often revolve around themes of rebellion and love, but tend to tiptoe around tragedy and the effect it can have on people. Wither also came out a year before The Selection was published and asks the reader to imagine a world where we all die by the age 20 or 25.

Thanks to a virus that was supposed to eliminate genetic imperfection, males only live to 25 with females only making it to 20.

The result is a society where the divide between rich and poor has become so vast, you might as well be talking about two different species. Girls are hunted down to be used as prostitutes or as experimental guinea pigs for government research.

Protagonist Rhine is an endearing character to follow from being sold as a bride through to her exciting escape from her gilded mansion prison.

Novels similar to The Selection tend to flog the popular trope of ‘rebellion against a totalitarian regime’, but the ones that stand out focus in on the characters. Rhine’s character makes this novel one to add to your reading list.

Red Queen conjures images of Alice in Wonderland, but this story is closer to The Hunger Games than to Lewis Carroll’s fantasy.

Aveyard presents us with a society divided between the powerful ruling ‘Silvers’ and the powerless but more numerous ‘Reds’.

Protagonist Mare is a ‘Red’ who lives with her parents and wants to prevent her best friend from being conscripted into a war against their kingdom’s northern rivals. Her journey deals with secrets, love, betrayals and all the things you come to expect and love within fantasy epics.

The fact that Aveyard’s tale moves at a good pace certainly helps sweep a reader along on Mare’s journey.

In reality, the plot is perhaps closer to Pierce Brown’s Red Rising saga than The Selection, but retains a strong connection to both. Each novel deals with the main protagonist having to deal with lies, self-discovery and rebellion against an unfair society. There is a reason these books remain popular.

Books like The Selection are ten-a-penny these days, but fortunately, many of them are strong stories with capable characters.

One of the closest in terms of style and tone can be found in Numbers Game. Rode’s tale of Treena as she adapts to a life she did not expect is a familiar one to anyone who’s ever gone into a job they thought they were destined to do, only to discover that it isn’t.

Treena bears a striking similarity to Katniss from The Hunger Games as she struggles to get the life she thought she wanted back, only to discover that there is much more at stake.

A dark conspiracy, revenge and love all intertwine to offer readers a thrilling tale with a likeable protagonist.

The UnTied Kingdom, by Kate Johnson

There are many books set in a bleak future or ruined world. The UnTied Kingdom sticks out because of its strong ‘alternate world’ premise.

Eve Carpenter lands with a splash in the Thames, but this is not the London or England she knows. Just that one line from the original book blurb on the back cover makes a reader want to know more.

Imagine a world without computers or where no one knows what a telephone is? Or where Princess Diana is still alive? It is possible to already imagine many people glued to their phones already running in terror at the mere possibility.

The UnTied Kingdom is a fantastic ‘alternate’ romance story with protagonist Eve being a perfect ‘fish out of water’ leading through a world like but unlike our own.

The tone veers between darkly funny to thrillingly serious which alone sets it apart from other titles similar to The Selection. Well worth a read if you get the chance.

The year before The Hunger Games film was released in cinemas, XVI snuck into bookstores daring to up the ante even further in the dystopian genre.

At first, you think protagonist Nina’s life is pretty normal. She’s a bog-standard 15-year-old girl who hangs out with her best friend Sandy. They go to school and Nina plays with her little sister when she gets home.

The problem is Nina is about to turn 16 and be branded with a government tattoo ‘XVI’ on her wrist (for the non-Latin savvy ‘XVI’ is ’16’ in Roman numerals).

Why is this a problem? Well because the tattoo is a visible announcement to the world that Nina is ready for sex.

Reflecting real-world issues including sex trafficking, murder, rape and toxic masculinity, XVI is a much braver novel than most of its YA contemporaries. Teenagers are often cruelly dismissed as knowing nothing about the world and the challenges they will have to face within it.

This admirably told story not only shines a light on our own patriarchal-controlled world, it also asks young men to consider and question the unhealthy norms of toxic gender stereotyping.

If you knew that some of your friends or partners often walk around constantly looking over their shoulder in fear, would you still behave in the way mass media still encourages men to?

This novel often gets lost amongst higher-profile titles, and whilst the ending is perhaps not as strong as I would have hoped, it is still well worth a read.

Pawn represents a familiar but nice twist on an old trope, asking a question many young women face every day. Given the choice, would you become someone else if you thought it gave you access to everything you ever wanted?

This is the question protagonist Kitty Doe faces when offered the chance to become a powerfully influential ‘VII’ in a class-based society divided by numbers.

Of course, there’s always a catch to the offer and Kitty soon finds herself having to stop a rebellion fostered by the person she’s impersonating. Pawn touches on familiar themes, but never dips too much in pace or quality.

Identity and shame follow Kitty throughout her journey, but the narrative never becomes too blunt or saccharine. This is the first in a series and one I would recommend taking a look at.

Chains of Gold, by Nancy Springer

One of the most prolific working writers of our time, Nancy Springer’s Chains of Gold is an excellent example of modern epic fantasy seeped in themes similar to those found in The Selection and other similar titles.

Cerilla lives in a castle and is fated to marry Arlen, a king who is to be sacrificed the moment she gives birth to their first child. Cerilla obviously wants to escape this horrifying reality but accidentally falls in love with the king and him with her.

To prevent a bloody end, they flee, leaving behind Arlen’s friend Lonn to take charge. But life outside of the castle is not what they hoped. This novel is a formidable tale, ably highlighting the difference between people’s perceptions of ‘true love’ and the reality. An excellently told tale.

Finding books similar to The Selection reveals dozens, if not hundreds of similar titles. The ones above represent books I believe to be closest in terms of tone, style and readability. And whilst one reader’s triumph is another reader’s tragedy, there should be at least one recommendation above that you will enjoy.

Are you searching for more YA dystopian novels similar to The Selection? Have any recommendations that didn’t make the list? Let us know in the comments! 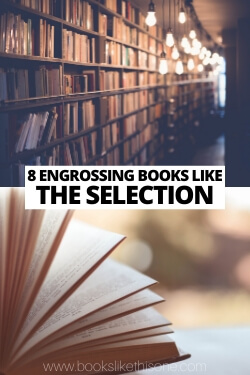