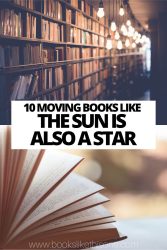 Are you looking for books like The Sun is Also a Star?

Meeting a cute boy that you really like may seem like a blessing. For Jamaica-born Natasha Kingsley, meeting Daniel Bae is a bittersweet occurrence.

On Natasha’s last day in New York City before her family is deported, she meets Daniel in a record store. He is awaiting a college admissions interview whilst Natasha is wasting time before an appointment with an immigration lawyer. With a countdown on their time together, their pair spend the next several hours talking about everything and nothing.

As time for their appointments arrive, they realize they were scheduled to meet the same person and it appears destiny is forcing them together. Natasha fights against her growing feelings for Daniel as well as her family’s deportation but the universe has something in store for both the teenagers that they never would have expected.

Stella Grant’s lungs don’t seem to want to work properly. Waiting on a lung transplant, Stella is confined to her own space to avoid infections or anything that could ruin her chance at the operation. Five feet apart: no exceptions.

Will Newman has been in and out of hospitals his whole life and with his eighteenth birthday approaching, all he wants to do is see the world outside.

When the pair meet, they can’t seem to stay away from each other but even a single breath could ruin Stella’s chance of a new life. But sometimes taking a risk is worth it.

A book similar to The Sun is Also a Star, Five Feet Apart is another moving coming-of-age novel about the complications of falling in love.

The author of bestseller The Fault in our Stars, John Green’s Paper Towns follows Quentin Jacobsen, a high schooler who cannot remember a time when he didn’t admire Margot Roth Spiegelman from afar.

She was an adventurous enigma that Quentin never thought he’d have the chance to impress until one night, she climbs through his open window and takes him out on a night of revenge and excitement.

The next day, however, Quentin arrives at school to find that Margot is a mystery once again. However, he finds clues specifically left for him and the more he follows the clues, the more he realizes he truly didn’t know Margot at all.

A compelling and thoughtful story, this is a great alternative for those looking for a book like The Sun is Also a Star.

Emergency Contact is a sensitive and compelling story about two teens falling in love and opening up to each other both over text and in real life. For a book similar to The Sun is Also a Star, add this to your to be read list.

Penny has just left home for the first time to start her freshman year of college and cannot wait to leave her high school life behind.

Now, she can finally learn how to be a writer. Sam, on the other hand, is stuck working in a café whilst also sleeping on a mattress in the upstairs storage room.

With almost no money to his name, he knows this may be his rock bottom. When the two meet, it’s awkward but somehow manage to exchange phone numbers.

This modern-day love story will have you laughing and crying much like The Sun is Also a Star.

What If It’s Us, by Becky Albertalli and Adam Silvera

A great LGBTQIA+ contemporary romance novel is What If It’s Us if you are looking for books like The Sun is Also a Star.

We meet Arthur, a young man who is visiting New York City for the summer. Here, he accidentally bumps into Ben at a post office.

Ben is in the middle of posting the last of his ex-boyfriend’s stuff and as he closes one door on a relationship, another seems to open for him. The pair leave the post office never expecting to see each other again… until they do.

Trying to plan date after date, the boys want to make their kind-of relationship work but sometimes, things just don’t work out like we expect. With Arthur’s time in New York coming to a close, a decision has to be made.

A comforting and heartwarming story of love and its obstacles, try What If It’s Us.

I’ll Give You the Sun, by Jandy Nelson

In I’ll Give You the Sun, twins Noah and June Sweetwine are fourteen and just hitting puberty. With this entrance to adulthood and teen life, the pair begin to drift apart due both to their raging hormones and the insane sibling rivalry they have.

Competing for their mother, Dianna’s, attention and attempting to understand their identities separate from one another, years later they are hardly speaking.

An emotional novel about the complications of siblinghood and family, this is a great young adult book similar to The Sun is Also a Star.

Have you already read this novel? Check out our list of books like I’ll Give You The Sun!

Friends is not a word to describe the relationship between Tate Collins and Miles Archer. Despite this, there is an undeniable mutual attraction between the two.

Therefore, Tate and Miles come to an arrangement: friends with benefits. Casual hookups with no strings attached.

Neither of the pair have the time or effort for a relationship so this seems to be the best route for them both. Always upfront, Miles states clearly that there will be no future for them nor should she pry into his past.

Tate is fine with that and has no intention of getting close to Miles until the situation takes a sudden turn.

Ugly Love is the perfect book similar to The Sun is Also a Star for those wanting a thought-provoking read full of emotional conflict.

If You Change Your Mind, by Robby Weber

If You Change Your Mind is a great new release for young adult fans wanting another romance to dive into, making it a perfect alternative book to The Sun is Also a Star.

Harry wants to be a screenwriter worthy of Hollywood so this summer he is determined to be distraction (read: boy) free so he can enter and win a screenwriting competition. A competition that will secure his place at the college of his dreams.

Then his first heartbreak, Grant, turns up with a secret that could ruin everything. Not to mention the cute, new boy in town, Logan, who makes Harry’s heart soar.

In Holding Up the Universe, no one has ever looked past Libby Strout’s weight. Struggling with that along with her mother’s death, her father’s heartbreak and trying to grieve herself, she is finally ready for a fresh start at high school.

Jack Masselin can’t recognize faces. His own family are strangers to him so he lives by a code of being cool and not letting anyone get too close.

However, when Jack and Libby are caught up in cruel high school game, they land themselves in group counselling and community service. As the two get closer, they begin to feel less and less alone.

A story about two people coming together despite the circumstances, pick up this book similar to The Sun is Also a Star.

Never Been Kissed, by Timothy Janovsky

The day before his birthday, Wren Roland sends out emails to all the boys he fancied before he came out as gay.

Wren has never been kissed but craves the perfect romance movie ending. However, when the morning arrives, he panics before realizing the emails will most likely never be read.

Wren’s number one crush and almost-first-kiss, Derick Haverford, becomes his drive-in theatre’s social media intern and as the pair work on a project to save the struggling business, they become closer and his first kiss is looking more and more likely.

For a book like The Sun is Also a Star that explores romance, destiny and the connection we have with others then pick up new release Never Been Kissed!

Norah hasn’t seen her childhood best friend, Skylar, in a long time but this summer, they will finally be reunited. Their old, constant chats have reduced to mutual likes of Instagram posts but Norah is hoping that their joint family RV road trip will bring them closer again.

However, when Skylar and Norah meet again, Skylar acts like he’d rather be anywhere else. Hurt, Norah responds with the same attitude.

As the trip unfolds, the two begin to see each other in a different light and end up warming up to each other in a way neither ever expected. Places We’ve Never Been is a perfect substitute for a book like The Sun is Also a Star.

If you have already read The Sun is Also a Star and love a good, young adult contemporary book – whether it’s romance or not – this list will have something for you!

Are you looking for more books similar to The Sun is Also a Star? Have any recommendations that didn’t make the list? Let us know in the comments! 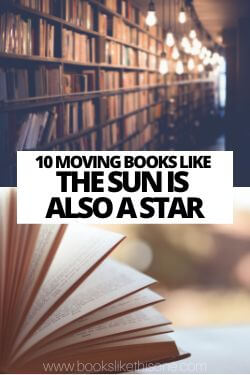