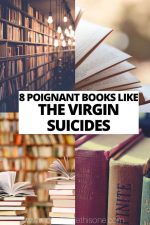 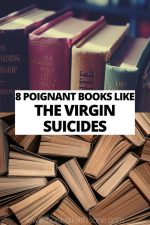 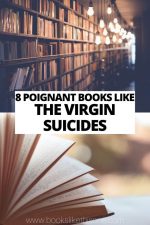 Are you on the hunt for more books like The Virgin Suicides by Jeffrey Eugenides? The Virgin Suicides is a peculiar novel that explores the lives of the conservative Lisbon family, from the perspective of a group of boys who live nearby. Over the period of a year the boys become increasingly obsessed with the Lisbon girls, and this interest peaks when the youngest, Celia, first fails to commit suicide, but later is successful by impaling herself on the gates that surround her family home.

The reasons behind such an act of desperation are unclear, and by the novel’s end, the other four Lisbon sisters are dead too, all taking their own lives in harsh and violent ways; it is a comment on mental health and American society at the time. The girls’ deaths remain inexplicable to the boys twenty years later, no matter how much they dig into the past. These novels, that are like The Virgin Suicides, explore the mysteries of mental illness, feelings of loneliness and isolation, as well as the finality of suicide.

Now a popular and somewhat controversial series on Netflix, Thirteen Reasons Why is a great choice for those looking for books like The Virgin Suicides. It began as a novel by Jay Asher, following the students of a high school who are coming to terms with the suicide of their fellow classmate, Hannah Baker.

Clay Jensen, two weeks after Hannah’s death, receives a series of tapes that were recorded by Hannah before she took her own life, explaining the reasons, or more importantly, the people who caused her to do what she did. A series of lies and toxic behaviour patterns emerge amongst the student body, detailed in Hannah’s tapes, and Clay struggles as he is drawn further into Hannah’s story, and the pain she was feeling in the year leading up to her suicide.

If you liked The Virgin Suicides, Thirteen Reasons Why explores many of the same themes and follows very similar characters.

City of Girls explores the cult of personality and the disillusionment of a young woman who has just arrived in New York. Although it doesn’t portray the intricacies of suicide, it does delve into the psyche of Vivian Morris, and the fallout of a scandal she is ill-prepared for.

Vivian arrives in New York to stay with her Aunt Peg, who owns the lacklustre but charming Lily Playhouse. Here Vivian is introduced to an array of exotic characters, including Celia, the showgirl, Anthony, her first love and Edna, an older actress friend of Aunt Peg. Soon, she begins partying every night and sleeping with whomever she meets, guided by Celia’s influence and the atmosphere of the city.

When Vivian is involved in a scandal however, she regresses into herself, facing a similar crisis to Lux in The Virgin Suicides. It is perhaps more subtle than the other novel’s portrayals of deteriorating mental health, but just as in books like The Virgin Suicides, there is an exploration into how one major event in your life can impact your future, and how other people speak about you.

The Bell Jar, by Sylvia Plath

Plath is believed to have suffered from bipolar disorder and severe depression throughout her short life, and The Bell Jar exemplifies this and is a good choice for those looking for more books like The Virgin Suicides.

The story follows Esther Greenwood as she becomes accustomed to life in New York, much like Vivian in City of Girls. She begins working at a magazine but unlike Vivian, is neither stimulated nor excited by her new life. A violent incident leads Esther to return to Massachusetts, where she remains lost and confused about what to do with her life, and spirals deeper and deeper into depression.

She faces a series of therapies for her mental health, including electroconvulsive therapy, and continues to get worse. The novel is devastatingly blunt and honest in its portrayal of attitudes towards mental health in the 1950s and 60s, drawing on real-life experiences in Plath’s life. The novel’s message stings even more as Plath died by suicide only one month before publication. If you liked The Virgin Suicides, you’ll enjoy The Bell Jar.

Have you already read this book? Check out our list of more books like The Bell Jar!

Richard Yates published Revolutionary Road in 1961, examining the suburban life of married couple Frank and April Wheeler in the 1950s. Their marriage seems perfect, but there are cracks beneath the surface and after an argument, Frank begins an affair with one of his colleagues and April begins to become increasingly unhappy with her life.

The pair decide to escape their rut, planning a move to Paris with their two children, but when April falls pregnant unexpectedly, this new development has disastrous consequences. As in books like The Virgin Suicides, there’s a desperate desire to discover the reasons behind April’s unhappiness, but less of an actual explanation, as Frank struggles with what to do with her often manic behaviour.

Girl, Interrupted, which was turned into a movie directed by Sofia Coppola, was originally a memoir by Susanna Kaysen, and it depicts the truths about mental health facilities in America in the 60s. Susanna enters a facility after she attempts suicide via an overdose.

The memoir does not only follow Susanna’s journey but also that of her fellow patients and the reader becomes invested in all their stories. Just as in novels like The Virgin Suicides, there is an exploration of what can lead to someone attempting to take their own life, or what can make them strive to be successful.

Kaysen’s memoir is honest and dark and portrays a side of mental health that may not have been so transparent at the time of publication.

The Gathering, by Anne Enright

Anne Enright’s novel The Gathering won The Booker Prize in 2007 and it is a masterful piece of writing. The novel follows Veronica Hegarty as she returns to Ireland for her brother, Liam’s, funeral.

Liam is known to have drowned himself on Brighton beach and Veronica reminisces about her childhood, and Liam’s, and what might have led him to take his own life. Learning the reason behind her brother’s death does little to comfort Veronica, and the depths of her loss and the trauma from their shared childhood follows her into her adult life.

Similar to The Virgin Suicides, there’s a wake of devastation left in the wake of those who have died, with no resolution in sight.

Sally Rooney was nominated for the 2018 Booker Prize with her second novel Normal People, written about couple Marianne and Connell, who begin a sexual relationship against all the odds while they’re still in school.

When they move onto college in Dublin, they move in and out of each other’s lives, despite their social and economic backgrounds shifting. Throughout this complicated time in their lives, Marianne and Connell face issues with themselves and ultimately, Normal People delves into Marianne’s inner mind, and what led her to become so emotionally detached.

Like The Virgin Suicides, one character is obsessing with another, with severe fears about the effects of trauma on their lives.

A Line Made by Walking, by Sara Baume

One of my favourite novels of 2018 was Sara Baume’s A Line Made by Walking – there’s an air of death that pervades its pages, whether it is provoked by the photographs of dead animals, or through the memories of Frankie, an art-history student, about her late grandmother.

This death in her life spurs her to stop living – Frankie abandons her world in Dublin to move into her grandmother’s house, where she is constantly reminded of what she has lost. The novel speaks to the depths of grief and mental instability in a beautiful way – it portrays a young woman in desperate need of escape and isolation.

Just as in novels like The Virgin Suicides, A Line Made By Walking examines the pits of human pain, giving the reader a glimpse of what it is like to become undone – the novel’s title is a comment on the Vincent Van Gogh painting, “Wheatfield with Crows” where a man walks through a field, leaving a path in his wake; it is commonly thought this was his last painting before committing suicide.

The Virgin Suicides is a cult classic – it is inexplicable and boasts a range of complex female characters, who even after twenty years, the teenage boys who obsessed over them in high school cannot figure out. These novels like The Virgin Suicides are devastating and honest in their depiction of mental health and suicide, and they are important in a world where more and more people are suffering in wars with their minds.

Are you looking for more books like The Virgin Suicides? Have any recommendations that didn’t make the list? Let us know in the comments! 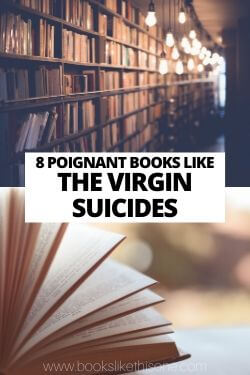