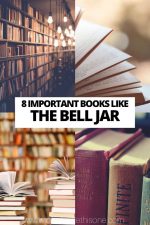 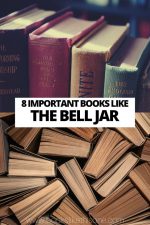 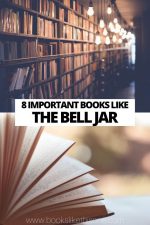 Sylvia Plath’s only novel, The Bell Jar, was published in 1963 and is a semi-autobiographical account of Plath’s own life as a young woman struggling with depression and bipolar disorder. The novel, which describes the debilitating feeling of depression as being akin to suffocating under a bell jar, is one of the best depictions of mental illness in literature in publication today. While many writers have certainly been inspired by Plath’s novel and writing, it can be difficult to find books like The Bell Jar that so expertly paint exactly what it is like to live with a mental illness.

Though Plath found a tragic end only months after the original publication of her novel, many writers have been inspired by her contributions to the world of fiction, memoir, and poetry. If you’re looking for some books similar to The Bell Jar, then these 8 titles are a great place to start.

Susanna Kaysen’s 1993 novel Girl, Interrupted which is perhaps best known for its 1999 feature film adaptation starring Winona Ryder is an excellent choice if you’re searching for books like The Bell Jar.

This memoir, set in the 1960s, follows a young Susanna Kaysen as she battles with depression and borderline personality disorder. It recounts her time spent and the people she meets in the notable McLean Psychiatric Hospital, where Sylvia Plath herself was also a patient.

The book expertly describes the isolating effect that mental illness can have on a young woman and also paints a picture as to how those with mental illnesses were treated in the 1960s. Much like The Bell Jar, it remains relevant today as a critique on how attitudes toward mental health have (or haven’t) changed.

Another book like The Bell Jar that follows a young writer struggling with mental illness is Elizabeth Wurtzel’s 1994 memoir Prozac Nation. Again, this book is probably best known for its 2001 film adaptation starring Christina Ricci, however, the ink and paper original is still worth reading especially if you’re searching for something similar to The Bell Jar with a more modern setting.

The book follows a young Elizabeth Wurtzel as she struggles with depression while she is a student at Harvard University and later as she begins her career as a writer in New York City, much like Esther in The Bell Jar.

The book, again, brings to attention the attitudes that the general public has toward mental illness and the stigma attached to those struggling with depression. It does bring up that society, indeed, has come a long way in normalising chemical imbalances and understanding mental illness, however, it is still glaring that there is a long way to go.

As one of the most pivotal short stories to be published in the late 19th century and believed to have paved the way for writers like Sylvia Plath, Charlotte Perkins Gilman’s 1892 short story The Yellow Wallpaper is an excellent choice if you’re looking of some books like The Bell Jar.

The story follows a young woman’s slow descent into madness and the dynamics between her and her well-meaning but misunderstanding husband. As a way to recuperate from a ” temporary nervous depression” and a “slight hysterical tendency,” she and her husband decide to spend the summer in a country home. The room that they choose has many windows that he believes will help her heal, however, the walls are covered with a torn yellow wallpaper that becomes a point of distress for the protagonist.

As the story progresses, she slowly descends more and more into madness as thoughts as to why this wallpaper is torn drive her more and more insane. This story did an excellent job bringing to the public’s attention to how women struggling with mental illness were treated in the late 19th century and has been subjected to many different feminist interpretations.

Because of its impact, The Yellow Wallpaper is still widely read and studied today and is a good read if you want to see what paved the way for writers like Sylvia Plath and you want to read more books like The Bell Jar.

If you’re looking for a more modern book like The Bell Jar, then you might enjoy Stephen Chobosky’s seminal work, The Perks of Being a Wallflower. This epistolary novel published in 1999 follows 15-year-old Charlie, an introverted high school freshman navigating his life and new friendships in the wake of the suicide of his best friend.

The Perks of Being a Wallflower expertly and empathetically portrays the isolating struggles of how depression and mental illness affects young people and has helped its readers not feel so alone in the world since its publication.

Though it has a bit of a happier ending than Sylvia Plath’s novel, The Perks of Being a Wallflower is one of the best books to read if you’re looking for novels similar to The Bell Jar as they both follow similar themes.

As one of Virginia Woolf’s most notable works, the 1925 novel Mrs Dalloway is a great choice for you if you’re looking for books like The Bell Jar. This stream-of-consciousness novel follows the day of socialite Clarissa Dalloway as she struggles with the social expectations of her time and class.

The novel shows parallels to The Bell Jar when it comes to the character of Septimus, a shell-shocked World War One veteran, and its critique on how mental illness was handled in the early 20th century. Also, much like in The Bell Jar, Septimus struggles with PTSD are believed to be inspired by Woolf’s own struggles with bipolar disorder.

Mrs Dalloway, like The Bell Jar, did a lot in its day to bring to the minds of the general public of the inner struggles that every day people might have with mental illness and the work that can be done to support those struggling.

Ned Vizzini’s 2006 novel It’s Kind of a Funny Story is a great choice if you’re looking for a novel like The Bell Jar, especially if you liked exploring the tribulations of battling depression and mental illness.

The novel follows 15-year-old Craig, who is admitted to a psychiatric hospital after experiencing suicidal thoughts due to the pressure of his competitive high school, feelings of alienation, and undue amounts of stress. The novel follows Craig as he navigates life in the psych ward, the relationships he forms there, and how he learns to take care of his own mental health.

Much like The Bell Jar, It’s Kind of a Funny Story is based on Vizzini’s own experiences of being admitted to a psychiatric hospital when he was young. Unfortunately, much like Plath herself, he never fully recovered from his depression and tragically ended his life in 2013.

Though not about depression, John Green’s 2017 novel Turtles All the Way Down is one of the best depictions of mental illness in publication today and is a fantastic choice if you’re looking for more books like The Bell Jar.

Turtles All the Way Down follows 16-year-old Aza Holmes, a high school student who struggles with Obsessive Compulsive Disorder and crippling anxiety. Both misunderstood mental illnesses and frequently wrongly depicted in the media, John Green pulls from his own experiences struggling with OCD to expertly and empathetically relay the horrible thought patterns and spirals that happen with those who live with this particular mental illness.

Turtles All the Way Down is a compelling and moving story not just about the struggle with mental illness, however. It contains themes like the importance of supportive friendships and familial relationships and how to deal with real feelings of hopelessness and grief.

The late Carrie Fisher’s memoir Wishful Drinking may not be the first title that comes to mind when looking for books like The Bell Jar, however, it is an excellent book to add to your reading list if you want to an honest, self-deprecating, and humorous depiction of what it is like living with a mental illness while under the public eye.

Obviously, Carrie Fisher was most famous for her portrayal of Princess Leia in the Star Wars films, for being the daughter of actress Debbie Reynolds and Eddie Fisher, and for her exception wit and talent as an actress, writer and comedienne.

In Wishful Drinking, Fisher depicts with refreshing candour about her struggles with bipolar disorder and what she did to overcome and live a functional life despite it. Fisher’s openness about discussing her mental illness helped many people to feel more at ease with their own struggles and greatly destigmatised both bipolar and mental illness in general. In fact, she was so open about how she sought treatment for her struggles that she had her urn be in the shape of a Prozac capsule!

If you want to read an infinitely more humorous depiction of mental illness without trivialising the struggles, then Carrie Fisher’s Wishful Drinking is a great book to pick up!

Finding books like The Bell Jar that depict mental illness well and empathetically can be a struggle, however, there are a number of titles out there that can help those who struggle feel less alone while educating those who don’t have a history of mental illness themselves.

Are you looking for books like The Bell Jar? Do you have any suggestions that didn’t make the list? Let us know in the comments! 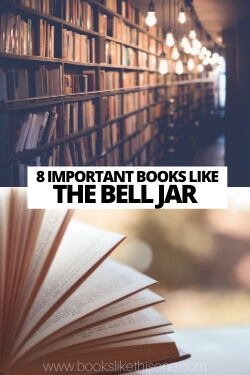