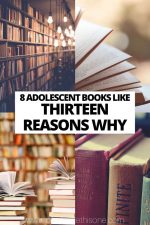 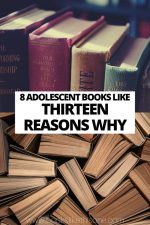 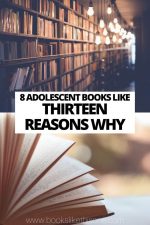 Books like 13 Reasons Why have become hot topics in recent years, especially as Jay Asher’s novel was developed into a somewhat controversial Netflix Original television show, but it was first published as a young adult novel in 2007. The story follows Clay Jensen, a teenager who is grieving for his friend Hannah Baker, who committed suicide two weeks earlier.

Initially, the reasons behind Hannah’s suicide are unknown, until Clay receives a series of tapes, from Hannah, detailing the thirteen reasons that made her end her own life. The novel very much focuses on the trials and tribulations of teenagers in today’s world such as bullying and sexual assault and paints a scary picture of what it is like attending high school and being sixteen years old.

The series received a lot of backlash for “glamorising” suicide; however, I think the novel brings up a lot of uncomfortable truths about the stigma around mental health that ought to be addressed. The following novels follow similar themes, such as love, grief, sex and suicide as it is dealt with by teenagers and just as in Thirteen Reasons Why, there are lessons to be learned in each novel.

If you enjoyed the novel and are looking for more books like 13 Reasons Why, make sure to check out these recommendations.

The Perks of Being a Wallflower became a cult classic when the film was made in 2012, reeling in teenagers from across the globe with its tale of friendship, unrequited love and trauma. The novel examines the adolescent condition without restraint, and it was banned from a number of school libraries upon its publication in 1999.

The story is about Charlie, a freshman beginning in high school who befriends two seniors, Patrick, and his sister, Sam, whom he falls in love with. The novel especially looks into the theme of relationships, and toxic relationships at that – Charlie is suffering from PTSD, although it is not understood why from the beginning.

As in novels like 13 Reasons Why, a series of issues are explored, revealing the dark and lonely parts of being a teenager, and how such difficulties, if not discovered, can lead to disastrous consequences. There are areas of Charlie’s story, as well as Patrick’s and Sam’s, that are instantly relatable and any reader will find an experience in this novel that they too have had.

Every Day, by David Levithan

Every Day takes an unconventional route, but nonetheless, explores the intimacy between teenagers in the modern world. A is a spirit of sorts – A has no body; A simply wakes up inside a different human being every morning and lives as the person they are inside. A is used to such a life, and never has any desire to stay inside one person past the one day they are allocated – until he meets Rhiannon.

When A wakes up in the body of Rhiannon’s boyfriend Justin, there is an instant connection and suddenly, A wants to remain a he, and remain within Justin to be close to her. But that’s not how this life works, and A must find a way to be with Rhiannon, and make her understand, and love A no matter what body he is in.

The novel, like Thirteen Reasons Why, deals with how teenagers can come to deal with their own existential crises, and this is exemplified in how A must jump from body to body, always meshing into who he becomes, never being able to be himself and have his own thoughts and feelings.

John Green is a master of writing young adult novels and understanding the love and humanity inside them. Looking for Alaska is a coming of age novel, following Miles, a boy who has just started at boarding school in Alabama. He is obsessed with famous last words, and soon has a circle of friends at his new school he feels he can be himself around, including the elusive Alaska.

He quickly becomes infatuated with her, not dissimilarly to how Clay is infatuated with Hannah in 13 Reasons Why, but like Hannah, Alaska is hiding sadness and darkness and is struggling much more than she is willing to let on.

John Green writes about teenage difficulties without downplaying them or trivialising them – he allows for there to be real pain and grief in these stories, without ever acting as though his characters are not old enough to have deserved such feelings.

Just as in other books like 13 Reasons Why, he treads carefully when entering their territory, this unique part of the human condition, and as someone who read Looking for Alaska as a teenager, I can say it never felt like Green did not know what he was talking about.

Already know and love this novel? Check out our list of more books like Looking for Alaska!

Jodi Picoult is known for her examination of trauma and strife – she often delves into the lives of teenagers as well as adults. In Nineteen Minutes, she explores a rather dark part of their lives – on a completely ordinary day in March, Peter Houghton, a student in an American high school, begins shooting, killing ten people and injuring others, all in the space of nineteen minutes.

The novel then begins to unravel what would have led Peter to do such a thing, and each chapter is in the point of view of someone who has been affected by the tragedy, whether that be fellow students or the judge who will preside over Peter’s case.

As the trials of Peter’s life are unearthed, it becomes more and more clear why he took to commit such a desperate act and though the reader cannot forgive the crime, just as in books like Thirteen Reasons Why, an understanding is developed as to why to these characters desperate acts appear to be the only way out.

Before I Fall, by Lauren Oliver

Lauren Oliver’s novel, Before I Fall, has an element of magical realism to it to best exemplify the lives of teenagers, and what their hopes, dreams and fears are. Sam is the epitome of someone who is popular – she has a strong group of friends, an attractive boyfriend and a good family. She attends a party on Cupid’s Day, but the party is disturbed by a girl Sam and her friends ruthlessly bully.

Afterwards, they are driving home and get into a terrible accident, where Sam is killed. However, the next morning, she wakes in her bed, at the beginning of Cupid’s Day, and must relive it all over again, only for the same end to come to her that night after the party.

Even though it focuses on the perpetrator and not the victim, the reader begins to sympathise with Sam as she realises the errors of her ways and deals with the consequences by dying over and over again.

There are many parallels that can be drawn between John’s Green’s Paper Towns, and Jay Asher’s Thirteen Reasons Why. Perhaps the most important being the mirroring of Margot and Quentin’s friendship, and Hannah and Clay’s.

Quentin becomes infatuated with Margot, who only ever seems to see him as the boy next door, and once they enter high school, forgets all about him for a time. One night, after years of not really speaking, Margot appears at Quentin’s window, hell-bent on getting revenge on her fellow classmates for wronging her, and Quentin is only too happy to oblige her.

However, when Margot disappears the next day, Quentin worries for her safety and enlists his other friends to try and crack the case, always hoping desperately for the best. Similarly to 13 Reasons Why, there is a devotion that is not reciprocated entirely between both Quentin and Margot, as well as Clay and Hannah, and through this one-sided affection, there is a real sense of how teenagers feel when they lose their first love.

John Green once again delivers with a tale on how interchangeable and elusive teenagers can be, not only to other people but to themselves.

Asking for It, by Louise O’Neill

Many of the themes that pervade Asher’s text also appear in Louise O’Neill’s Asking for It, particularly those of sexual violence and the implications this has on mental health.

Emma is the popular girl in school, very similar to Sam in Before I Fall. She rules with an air of menace and is never afraid to speak her mind, even if that upsets her own friends. Emma attends a party while her parents are away, where she drinks and does drugs, and where she is gang-raped and violated by several boys in her year.

The next morning, Emma can barely remember what happened to her, but the evidence is there in photographs of what these boys did, and yet, because she is considered promiscuous, Emma is told, sometimes in mere looks, that she was asking for it.

Like in 13 Reasons Why, what Emma goes through is not unlike what Jessica or Hannah go through, and both novels explore the hypocrisy and double standards behind such an act.

The Pact, by Jodi Picoult

Jodi Picoult’s second novel on this list, like in 13 Reasons Why and Asking for It, deals with the intricacies and difficulties of consent, and the lasting impact of suicide.

The Pact follows the relationship between Chris and Emily, who have known one another forever, and in their teens become boyfriend and girlfriend. Their families are best friends, and there are hopes the two will marry in the future. All seems well, until one night the pair are found, Chris with a head wound, and Emily with a bullet in her skull, where she is later pronounced dead.

It seems like it had to have been Chris, despite the fact that anyone who knows him can attest that he adored Emily, and soon it’s revealed there was a suicide pact made between them. But who initiated the pact, and did someone get cold feet, with one teenager dead and the other alive?

As in novels like 13 Reasons Why, the death of a young woman sends the community into a spiral, and pits the two families against one another, all while investigating the root of Emily and Chris’ pain, and why they would agree to such a pact.

Some of these novels are considered YA, but they can be enjoyed and understood at any age. Thirteen Reasons Why uncovers a lot of terrible truths about what it is like to be an adolescent, as do the novels on this list, but hidden away in some of these texts, there’s also the occasional humbling moment, that brings us back to when we were all that age.

Are you looking for more books like Thirteen Reasons Why? Have any recommendations that didn’t make the list? Let us know in the comments! 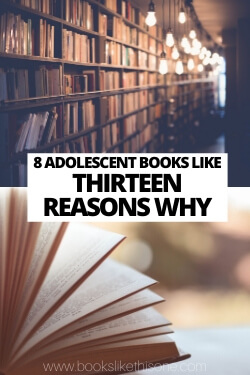