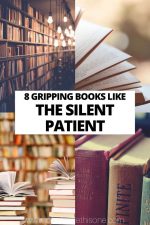 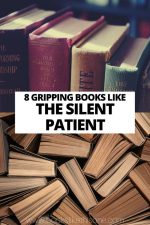 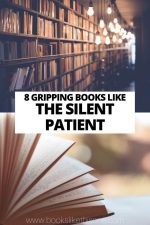 Alex Michaelides’ novel The Silent Patient was one of the best novels I have read in many years, and this is largely to do with the way the story unfolds, bringing together two parallel stories that weave in and out of one another, one about Alicia Berenson, the woman who shot her husband five times in the head and became mute, and Theo Faber, her forensic psychotherapist, whose job is to try and have her break this silence. Michaelides stays ahead of the reader always, planting clues and red herrings, always making you believe you had just about figured it out and then revealing something that places you back at square one. These books like The Silent Patient, though not all thrillers, each do something similar with their narration and storytelling, each loaded with a twist that shakes the reader.

My Sister’s Keeper, by Jodi Picoult

My Sister’s Keeper is probably Picoult’s most well-known novel – many of her novels, due to the nature of stories told through multiple perspectives, naturally have unreliable narrators, or ones that are not telling us everything for one reason or another. This one is no exception – when Anna, a “test-tube baby” born to save her sister’s life, decides to sue her parents for the rights to her own body, the Fitzgerald family is thrown into turmoil, unable to make the impossible choice of which sister’s life is more important.

The story is largely told through Anna and her mother, Sara’s perspectives, but her father, brother, lawyer and others all weigh in on the case, constantly changing our own opinions in the process. Books similar to The Silent Patient, with the use of multiple timelines, are often able to distort events easily, making it all the more intense when the reveal is upon us.

The Thirteenth Tale, by Diane Setterfield

The Thirteenth Tale was one of the first novels that I read that truly gripped me – the twists and turns this novel takes brings the reader on a ride they daren’t get off and has one of the biggest twists I’ve ever come across in fiction.

When novelist Vida Winter contacts Margaret Lea asking for her to write her biography, Margaret at first does not want anything to do with telling the elusive author’s life story. For years the press has been mystified and fascinated by Vida, as she refuses to divulge anything about her upbringing, but upon learning she is terminally ill, she decides the only one to tell her story is Margaret.

Margaret plans to decline the offer but upon meeting Vida, she becomes enthralled in her tale, until she must know the ending to her story. As in books like The Silent Patient, you follow along with the protagonist as they try to get to the truth, and often when you get there, part of you wishes that you hadn’t.

The Girl on the Train, by Paula Hawkins

Books like The Silent Patient often use more than one timeline and more than one point of view, leading to a web of half and muddled truths that need untangling in order to understand what’s going on. In The Girl on the Train, Rachel is a divorcee and a drunk struggling to keep her life together and is comforted on her commute to work by witnessing the apparent wedded bliss of a young couple who live doors down from her ex-husband, whom she can see when she is on the train.

When the woman in this couple, Megan, is reported missing, Rachel cannot help but involve herself in the case, her fascination driving her to near madness as she has holes in her own memory from the night in question. If you liked The Silent Patient, The Girl on the Train does something similar with there being multiple suspects and potential perpetrators – as you discover more about Rachel, Megan and Anna, you doubt if any of them are entirely innocent.

Already read this book? Check out our list of more books like The Girl on the Train!

I’ll never forget how I felt when I discovered the twist in Never Let Me Go, when I realised exactly what Kathy, Tommy and Ruth are, and what their lives come to mean. Perhaps the most heart-breaking novel on this list, the twist never fails to shock me, or make me wish it wasn’t true.

Kathy is recounting the story of her life with her two best friends Ruth and Tommy, and their time at Hailsham, a boarding school of sorts. The novel is set in Britain, and there really doesn’t appear to be anything particularly unusual about the world they live in – Kathy is speaking to us as a carer in the future, who travels from hospital to hospital looking after those who are sick.

However, as she delves into describing Hailsham, one cannot ignore the strangeness of the school, the emphasis on staying well, and that the students never appear to leave, or even question that leaving is something that normal school children would do. This novel isn’t a thriller, but more of an allegory about our own lives and how we live them, and just as in novels like The Silent Patient, the twist makes you stop and pause in sheer horror.

Have you already read this book? Make sure to check out our list of more books like Never Let Me Go!

The First Phonecall from Heaven, by Mitch Albom

Albom’s most known novel is The Five People You Meet in Heaven, but this novel of his is definitely worth a read. When citizens of a town in Lake Michigan start getting phone calls from their departed friends and family, it sparks a media crisis and mass hysteria.

Jack Sellers, a police chief, receives a call from his dead son Robbie, but he cannot bring himself to believe that the calls are real, as they defy logic. This sparks him to launch an investigation into what’s truly going on, desperate to find a way to stop receiving the calls, but is he secretly hoping that they are true? And is everyone telling the truth about the calls they are receiving?

Shutter Island was originally a book, though most people are probably familiar only with the film starring Leonardo DiCaprio. Set in 1954, U.S. Marshall Teddy Daniels has been summoned to Ashecliffe Hospital, home for the criminally insane, in order to pursue Rachel Solando, a patient who escaped and known to have murdered several people.

As the investigation continues, Teddy learns some disturbing truths about Ashecliffe, and their potential malpractices, and even comes to distrust his own partner. Paranoia kicks in, and every answer leads to ten more questions – if you liked The Silent Patient, Shutter Island kicks things up a notch in terms of suspense and twists.

Sharp Objects follows Camille Preaker, an alcoholic reporter who is trying to discover the truth about a murder that has taken place in her hometown of Wind Gap. Like Theo in The Silent Patient, Camille is trying to get to the truth of what really happened, whilst also fighting her own personal demons.

As Camille struggles to mould back into her old life, faced with her difficult relationship with her mother, memories of her dead sister and issues with her living one, the search for the murderer intensifies and everyone in a town like Wind Gap can appear to be guilty.

With many parallels in storytelling and characters, books similar to The Silent Patient, like Sharp Objects often provide a gut-wrenching twist that will fill that hole you’ve been missing since reading Michaelides’ novel.

Have you already read this book? Make sure to check out our list of more books like Sharp Objects!

We Need to Talk about Kevin, by Lionel Shriver

Lionel Shriver’s novel We Need to Talk about Kevin won the Woman’s Prize for Fiction and there’s little wonder why – it has masterful prose and details the harrowing facts of Kevin’s upbringing and crimes with precision and suspense.

Eva, Kevin’s mother, is writing letters to Kevin’s father, Franklin, about their lives together, in an attempt to understand where they went wrong, and if Kevin deciding to massacre a group of teenagers in his school was down to nature or nurture – or perhaps a bit of both, as Eva admits frequently she never really wanted to have him.

A frightening novel, though fictional, that draws on the real-life shootings of children in American high schools, it, as in novels like The Silent Patient, leads you to believe you know everything there is to know – until suddenly you don’t.

If you’re looking to get back into reading, a novel with a twist can be a huge motivator. The excitement you feel reading The Silent Patient when you realise the truth about what happened the night Gabriel was killed leaves the reader animated and hungry for me, and these novels, although all in different ways, will provide this same level of satisfaction. Books like The Silent Patient have a way of melting back time, so you hardly notice you have spent nearly four hours straight just turning a page.

Are you searching for more books like The Silent Patient? Have any suggestions that didn’t make the list? Let us know in the comments! 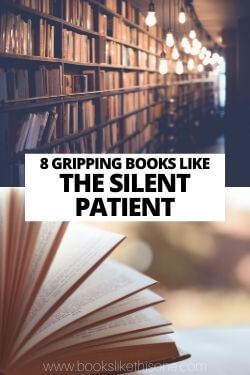