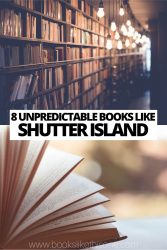 If you like to be shocked by your fiction with plenty of twists that you don’t see coming then you will enjoy the many unpredictable books like Shutter Island listed below.

Dennis Lehane has written many series of gripping psychological thrillers, but his stand-alone novels are perhaps even more surprising with his 2003 novel following character US Marshal Teddy Daniels is just one example.

Teddy has been called out to the Ashecliffe Hospital for the criminally insane on Shutter Island to track down an escaped killer, a multiple-murderess Rachel Solando, but when he arrives with his partner Chuck Aule nothing is quite as it seems.

With a hurricane battering the island and patients disappearing from locked rooms, Teddy’s investigation is anything but simple, it seems that the closer he gets to the truth the harder it becomes for him to determine what he is actually looking for.

Thanks to Lehane’s old school style, let alone this mind-blowing plot, the novel is completely absorbing, hooking you in after the very first sentence. Prepare to second guess, prepare to be manipulated, prepare to question your grip on reality in these books like Shutter Island.

There aren’t many characters I feel sorry for, but the poor meek and mild second wife of Maxim de Winter in Daphne Du Maurier’s Rebecca is one of them. Her whirlwind romance with the charming Mr de Winter is short-lived when she moves with him to Manderley, the grand Cornish stately home he shared with his late wife the titular Rebecca.

Forced to live in Rebecca’s shadow, she struggles to adjust to her new role of lady of the house thanks to some of the staff, particularly Mrs Danvers — the head of household and close friend of Rebecca. The second Mrs de Winter resolves to find out what happened to Rebecca to end her waking nightmare but never expected what she eventually uncovers.

Du Maurier was gaslighting her characters before gaslighting entered our vernacular, Rebecca is creepily atmospheric, an old school psychological thriller and the perfect book to kickstart this list of novels like Shutter Island.

Gillian Flynn’s thrilling novel Gone Girl certainly has a twist that most readers do not see coming making it the perfect book like Shutter Island.

On the outside and according to her diary, Nick and Amy Dunne were like loves young dream when they met in New York. They married but the honeymoon period soon fizzled out when they move back to Missouri following the declining health of Nicks mother.

On their fifth wedding anniversary, Amy mysteriously disappears and the unassuming Nick is the police’s prime suspect thanks to Amy’s friend’s accounts that she was afraid of him and his odd behaviour – certainly not the behaviour of a grief-stricken, worried husband.

Unravelling over dual narratives we follow Nick on the search for his missing wife while getting to the bottom of her diary entries and the secrets she told her friends. Flynn writes in such a way that it is easy to devour Gone Girl, compulsively trying to find out what happened with an ending that you won’t quite believe!

Before I Go To Sleep, by S. J. Watson

If it is the exploration into memory and trauma that has you on the hunt for more novels like Shutter Island then look no further than Before I Go To Sleep by S. J. Watson where memory, or lack thereof, is at the heart of the narrative.

Christine wakes up every morning into a living nightmare. She does not know where she is, who the man sleeping next to her is nor does she recognise the face staring back at her in the mirror either.

Every day, Christine’s husband Ben has to explain to her that thanks to a terrible accident she’d had decades earlier, every time she goes to sleep she forgets everything, a condition he calls anterograde amnesia. Every day, Christine tries to piece together what she can about her life only to forget it all again by the following day.

As the novel unfurls, we along with Christine come to realise that not everything Ben tells her is true. Before I Go To Sleep has a fantastic premise that any psychological thrill seeking reader will enjoy.

The Woman in White, by Wilkie Collins

As with many recent books like Shutter Island, they have been influenced by some of the classics and Wilkie Collins 1859 novel The Woman in White is one such example that perfectly blends Victorian gothic and psychological realism.

Walter Hartright has seen the woman in white before, on the dark streets of London in the novel opening, realising later she was a patient escaped from a mental asylum. He is reminded of this eerie encounter when he takes up work as a drawing master to the Fairlie family, as one of his students, Laura Fairlie bears a striking resemblance to her.

Despite falling in love with Walter, Laura marries the sly Sir Percival Glyde who has his sights set on her inheritance. And so unfurls a story of mistaken identities, insanity, corruption and greed that unravels along the corridors of English country houses and city mental asylums.

I am as spooked by this novel now as I was after the first reading, prepare for goosebumps and for your blood to run cold thanks to The Woman in White.

Tell No One, by Harlan Coben

Any of Harlan Coben’s novels would have felt quite at home on this list of surprising books like Shutter Island, as he is known for his gripping plots and suspenseful narratives, but I have chosen Tell No One thanks to the protagonist haunted by a tragic past.

On the anniversary of their first kiss, newlyweds David and Elizabeth Beck celebrate at a secluded lake but tragedy strikes and Elizabeth is abducted and murdered.

Though the perpetrator is caught, David is still reeling from the loss 8 years later. Never having been able to outrun the tragedy it becomes even more impossible to hide when two more bodies are found near the lake where Elizabeth went missing and police suspect David had something to do with it.

We follow David as he tries to not only prove his innocence but also find the source of a suspicious email alluding to his wife still being alive, a seemingly impossible task when he is asked to tell no one.

Coben barely releases the throttle in Tell No One, once you start reading you will not stop until you have got to the bottom of the mysterious goings-on.

There is a further exploration into memory in Joy Fielding’s 1991 novel See Jane Run.

The titular Jane can solve many things, like how to determine the length of a hypotenuse. She cannot, however, solve how she came to be on a Boston street corner wearing a blood-soaked dress concealed in an overcoat with $10,000 shoved in the pockets.

Following a few days spent in a motel trying to remember and work out what to do next, Jane decides to go to the police station. She ends up in hospital for an examination where a Dr Whittaker comes forward claiming to be her husband. Hoping this Dr Whittaker can fill in some of the blanks, Jane is taken back to their suburban home and forced to take an assortment of pills under the watchful eyes of Paula Marinelli their faithful housekeeper.

Clearly, all is not what it seems, fuelled by suspicion Jane tries to piece together the horrific events from her past that her mind would clearly rather forget. See Jane Run is a compulsive, explosive, gripping read with an ending you won’t believe, it is the perfect book similar to Shutter Island.

The Murder of Roger Ackroyd, by Agatha Christie

Said to be Agatha Christie’s most daring crime novel, the Queen of the twist ending is next to feature on our list of novels like Shutter Island with an early Hercule Poirot mystery, The Murder of Roger Ackroyd.

They say knowledge is power. But unfortunately for Roger Ackroyd, knowledge means death; his death. Roger knew his wife killed her abusive first husband by poisoning him. He also knew she was being blackmailed for what she did which drove her to suicide. Just when he receives her suicide note confirming all this and more, someone stabs him!

With a number of suspects to chose from including the usual housekeepers, townsfolk and relatives who’d benefit from a handsome inheritance, Poirot deduces who the blackmailer and killer is in a twist you will not see coming – The Murder of Roger Ackroyd is Christie at her best!

Strangers on a Train, by Patricia Highsmith

The plots of books like Shutter Island are just as important as the characters embroiled within them and Patricia Highsmith’s enduring novel Strangers on a Train is another example of this.

The inspiration behind Alfred Hitchcock’s 1952 film of the same name, Highsmith introduces us to Guy Haines and Charles Anthony Bruno, both passengers travelling on the same train. Guy is a successful architect in the throes of a bitter divorce and, as it turns out, Bruno is a manipulative psychopath who manages to persuade Guy into swapping murders with him.

Bruno will kill Guy’s wife if Guy will kill Bruno’s father for him.

Highsmith expertly showcases how even the most ordinary of people are capable of the most dastardly crimes under the right circumstances as Guy unwittingly becomes trapped in Bruno’s twisted scheme.

Still as good now as it was then, Strangers on a Train begs the question of whether or not one is born with a predilection for violence or is it as a result of our environment.

Other than their remarkable plots, what I love most about books like Shutter Island is as reader you are solving the mysteries and discovering the answers along with the characters who, for the most part, are just as much in the dark as you are, enjoy!

Are you looking for more books similiar to Shutter Island? Have any recommendations that didn’t make the list? Let us know in the comments! 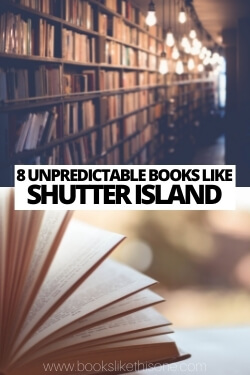