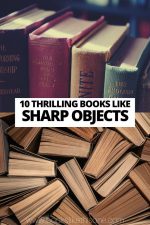 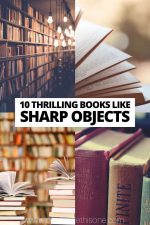 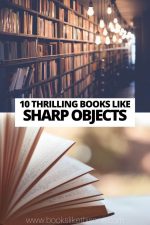 Sharp Objects by Gillian Flynn was only developed into an award-winning series starring Amy Adams last year – however, the novel remains the better of the two. Most people will either have read or seen the film adaptation of Flynn’s novel Gone Girl, and Sharp Objects follows the same dysfunctional characters, wrapped up in lies and deceit, each trying to escape the inescapable which is why many people are searching for more books like Sharp Objects to read.

When Camille Preaker is sent to her hometown of Wind Gap to report on the disappearance and murder of a little girl, she is flooded with past traumas and the very real dangers that forced her to leave in the first place. Below are other novels like Sharp Objects that fit in with the psychological thriller genre, strangely all written by women, each making it next to impossible to put the book down without knowing what happens next.

Flynn’s second novel, Dark Places, to be adapted into a film did not receive the same rave reviews as Gone Girl, however, the novel is anything but a disappointment. Following Libby Day almost three decades after her family was allegedly massacred by her brother, we discover that she has not moved past her trauma, a common trope in Flynn’s protagonists.

After years of milking her sob story, Libby finds herself out of money and doubting her memories of the night of the massacre, leading her on a path to find the true killer. But will she be so lucky as to escape death a second time? A natural follow-up read from Sharp Objects with many of the same tropes that made Flynn’s debut so good.

Nugent’s novel Skin Deep proves that this genre, which can often leave a lot to be desired in the quality of the writing, can be written well whilst still maintaining a compelling story. The novel opens with Delia Russell in Nice, fleeing a crime scene. It then takes us back to her childhood in the West of Ireland, where she is adored by her otherwise abusive father.

The story progresses, painting Delia as someone whose beauty is only skin deep, as her selfishness and narcissism often creates dire consequences for those around her. Like Sharp Objects, the novel plays with suspense, forcing the reader to continue. The only novel I’ve been able to read in a 24-hour period in years, Skin Deep is a must.

Books like Sharp Objects and The Rose Petal Beach have little in common besides the fact that they keep you guessing. Every chapter reveals a little more of the story, but often dredges up more questions, whilst leaving others unanswered.

When Tamia’s husband Scott is accused of attempted rape, their family unit is sent into turmoil, as she tries to consolidate the version of her husband that she knows, and the version of the evidence that the police have pointed to. This novel is a little long-winded, but the impact it has with every twist makes it hard to stop reading, with every crime discovered turning your stomach even more.

Platform 7 is a book like Sharp Objects in the sense that it begins with a crime, and the novel is the journey of how this crime came to be. The protagonist, Lisa, as quickly discovered, is a ghost, doomed to haunt the train platform where she died.

An amnesiac in death, the novel follows as Lisa comes to recover her memories, of who she was and how she died, leading to a story about domestic abuse and gaslighting. A wonderfully written novel that deals with the psyche, of the victims and the perpetrators of crime, Doughty produces a story both honest and captivating.

Camille in Sharp Objects and Lisa deal with similar traumas, just perpetuated by different people in their lives, and though you know from the beginning that Lisa is dead, you’re still devastated as the final years of her life are unfolded.

Big Little Lies, like Sharp Objects, is now an award-winning show with an all-star cast – however, it began as a novel about three women living in Australia, and the lies they keep in their day-to-day, from each other and their families.

At the centre of this novel, like so many on this list, is a murder, but whose murder? And who is responsible? The more we find out about Madeline, Celeste and Jane, the more we discover how they each had motive, whilst we also wonder if one of them is the victim of this crime.

If you like the mystery element in novels like Sharp Objects, Big Little Lies will satisfy this craving.

Have you already read this book? Make sure to check out our list of more books like Big Little Lies!

Before I Go to Sleep, by S. J. Watson

The novel Before I Go to Sleep is less crime and more thriller – Christine wakes up every morning with no memory of the day before and must come to relearn her life all over again, with the help of her husband Mark and the notes and photographs he leaves all over the house for her.

However, Christine discovers a cam recorder where she has been filming herself telling the story of her life, and that she has been keeping this footage from her husband, although she can’t understand why. As Christine continues to dig for the person she used to be, she finds those around her more resistant to telling her the truth and discovers that the accident that caused her to lose her memories was no accident at all.

As in books like Sharp Objects, Christine finds herself unknowingly inching dangerously close to the traumatic memories that have been closed off from her for so long.

The Woman He Loved Before, by Dorothy Koomson

The second of Koomson’s novels on this list, The Woman He Loved Before is equally a good one. Libby is married to Jack and her life is seemingly perfect – except for Eve, who despite being dead, remains a permanent fixture in their marriage.

The circumstances around Eve’s death are mysterious, and when Libby finds a diary of hers, she comes to discover the desperately tragic life her husband’s first wife had and cannot help but wonder if he had anything to do with her death.

Like in Sharp Objects, the protagonist unwittingly blunders within dangerous parameters of the truth, bringing the reader on a thrilling ride as she does so.

The second book on this list of Nugent’s, and also her debut novel, Unravelling Oliver is masterfully written and hooks the reader from the first chapter. When Oliver beats his wife Alice into a coma, the people who knew them begin to weigh in on what could have possessed him to do such a thing.

Starting with the cold words, “I expected more of a reaction the first time I hit her,” the reader is instantly given insight into Oliver’s character.  Unlike Sharp Objects and The Rose Petal Beach, you know from the beginning who Oliver is, and that he assaulted his wife; it is the why that is the mystery of this novel, depicted in the voices of those that knew him.

This, and what happened on a trip to France in his teenage years, are the obscurities of the novel that are only revealed towards the satisfying, if not horrifying, climax of this novel.

I couldn’t make a list of books like Sharp Objects without mentioning the infamous Gone Girl. As in Sharp Objects and Skin Deep, there isn’t a character you root for in this novel. When Nick’s wife Amy disappears on their fifth wedding anniversary, an investigation is launched in order to find her.

Inevitably this dredges up questions about their marriage, about Nick’s devotion to Amy, suddenly making him the prime suspect in her believed murder. Gone Girl takes so many twists and turns; there is never a time you know who you should be rooting for, as each of the characters has something rotten about them, and yet you can’t help reading in the hopes of answering the five questions Nick asks of Amy at the beginning of the novel – “What are you thinking? How are you feeling? Who are you? What have we done to each other? What will we do?”

Lady in the Lake, by Laura Lipmann

Lady in the Lake follows a wannabe reporter Madeline who has recently left her husband and son to pursue a career in journalism. The novel is set in the 1960s, meaning Madeline’s opportunities in this sector, as a woman, are limited and unconventional.

Madeline starts up an affair with a police officer and stumbles down the trail of trying to discover what happened to Cleo Sherwood, an African American woman who the rest of the world seems damn adamant on forgetting about.

Almost mirroring Camille in Sharp Objects, Madeline discovers it is not enough to write about this woman – she thirsts for the answers to how she ended up in the lake to begin with and finds herself endangered for her nosiness.

Often people know what you’re talking about when you use the term ‘psychological thriller’ but to put it into words is a little more difficult. These novels deal with the mentality of people when pushed to their limits, when accused of something they didn’t, or often did, do, or how one deals with discovering the person they thought they knew is more layered and disturbed than they ever imagined.

These books like Sharp Objects delve deep into the psyche of perpetrators and victims, often wrapped up in the middle of a crime and the way these novels are written leaves cliff-hangers at the end of each chapter.

Are you on the hunt for books like Sharp Objects? Have any recommendations that didn’t make the list? Let us know in the comments! 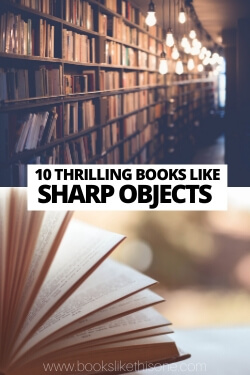