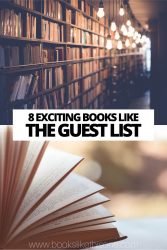 A remote setting, a high profile wedding, lots of people forced to spend time together, stranded by a storm, all hiding secrets – Lucy Foley’s fifth novel has all the right ingredients for an intense narrative, and then a dead body is discovered amping up the mystery!

Thanks to the alternating points of view we learn that many of the guests invited to the ‘wedding of the year’ have secrets, secrets they would kill to protect.

The wedding planner always has a feeling of impending doom thanks to past trauma. The bride is finding it hard to concentrate on her imminent nuptials thanks to a mysterious note she received. Her husband to be is reunited with school friends which stirs up memories from their boarding school days where only the tough survived, plus many more guests with motive, but whodunnit?

If you are looking for more books like The Guest List to fuel your inner sleuth, then look no further than the mysterious books listed below.

The Hunting Party, by Lucy Foley

Lucy Foley seems to have cracked the code for writing a gripping mystery novel thanks to her first thriller The Hunting Party which has cemented her as a modern-day Agatha Christie.

This time the novel is set just after Christmas, that weird period between Christmas and New Year. A group of thirty-something friends meet together to welcome in the New Year a tradition they started 10-years-ago as students.

This year they head to the Scottish Highlands, arriving on the 30th December to their secluded lodge just before a terrible blizzard cuts them off from the rest of the world. Two days later, on New Years Day, one of the party is dead, and one of the “friends” did it.

After a decade of friendship, there’s plenty of memories being dredged up. With no escape, the weight of secret resentments start to become unbearable but which one of them will crack first? If you like The Guest List for Foley’s writing and a tense reveal I am sure you will find The Hunting Party an equally gripping read too.

One by One, by Ruth Ware

From friends celebrating in the snowy highlands of Scotland to a corporate ski trip in a rustic mountain chalet in our next book similar to The Guest List, it is the exceptional Ruth Ware and her novel One by One.

You can’t choose who you work with, sometimes it is hard enough to get through the workday with some of your colleagues let alone spend time with them outside of work.

But with all the space of the mountains, it perhaps doesn’t sound too hard to escape those irritating coworkers, but when an avalanche hits and corporate hierarchy is buried in the snow, survival instincts reign. Once the snow starts clearing the only question that needs answering is how many of the team will remain…?

Like Foley, Ware has established herself as a best-selling suspenseful author and One by One is no different, any reader of books like The Guest List will enjoy any number of her books but I think One by One is a particularly exciting place to start.

If you like The Guest List for all the secrecy and lies, then our next book will be right up your street — it is Harriet Type’s debut novel Blood Orange.

To the outsider, Alison has it all – a husband who loves her, a daughter to spoil, a nice home and a successful career as a defence lawyer. But things on the surface are never as they seem. Alison drinks too much and neglects her family thanks to her demanding job and the affair she is having with a colleague.

As the story unfurls, Alison has just been given her first murder case to defend. Her client is accused of killing her husband, a murderous act that she doesn’t deny and wants to plead guilty for, however, something doesn’t quite add up.

In a bid to save her client, and herself, Alison must get to the bottom of what is going on, but she needs to be careful that her own carefully guarded secrets don’t get revealed in her search for the truth.

Blood Orange is a story of deceit, jealousy, love and hate, it is disturbing and tantalising to read at the same time – a perfect psychological debut!

So far we have encountered murder and secrecy among family, friends and work colleagues and in our next novel similar to The Guest List it is between nine seemingly perfect strangers. Soon to be a series starring Nicole Kidman as the mysterious resort director, it is Liane Moriarty’s Nine Perfect Strangers.

Tranquillum House is a health and wellness resort, one which promises a peaceful transformation to stressed out, frazzled city dwellers who leave their baggage, (mental and literal) at the door in order to absorb the soothing ambience.

We follow these nine strangers as they try to unwind in the glamorous resort setting with meditation, yoga and hot stone massages little knowing there is a very dark agenda behind the retreats relaxing facade.

Like Ware and Foley, Moriarty is another writer whose books have been known to make readers drop everything to finish and Nine Perfect Strangers is certainly no different.

Murder on the Orient Express, by Agatha Christie

We couldn’t have a list of books like The Guest List without at least one appearance from the Queen of murder mystery novels, it is Agatha Christie and her classic Murder on the Orient Express.

A curious assortment of passengers could be found on the Orient Express journeying from London to the Middle East. Those include an American Tycoon, a countess, a colonel, a doctor among many others and of course Detective Hercule Poirot.

A snowdrift stops the train in its tracks one night, it takes until morning for the snow to be cleared and in that time the tycoon is found mysteriously dead. Stabbed a dozen times in a room, alone, curiously locked from the inside. With a killer in their midsts, Poirot has to find the murderer before they strike again.

There are countless adaptations of the phenomenal Murder on the Orient Express, even though I know the outcome I don’t get bored of this novel, or any Christie mystery really, which is credit to her enduring skill as a writer.

The Stranger, by Harlan Coben

Harlan Coben has become renowned for writing suspenseful thrillers perfect for adaptation with a number of his books being turned into movies and limited series. His novel like The Guest List has recently been turned into a Netflix serial, it is the compulsive story of The Stranger.

The Stranger appears as if from nowhere when you least expect it approaching you in the car park, the supermarket, the pub. You won’t know who they are but they know a hell of a lot about you, revealing secrets that threaten to shatter your world.

This is exactly what happens to Adam Price. His life is seemingly perfect until the stranger reveals an earth-shattering secret to him about his wife. A secret which not only throws his whole life into flux but the lives of others too. As Adam searches for the truth, the where and the why he becomes embroiled in something far more sinister.

The Stranger is a novel that hooks you in with ease, an addictive page-turner you won’t want to stop reading until you uncover the biggest secret of them all!

Before I go to Sleep, by S.J. Watson

Imagine if you woke up every day not remembering anything about your life or even the day before. This idea forms the basis of our next book, S.J. Watson’s mind-bending Before I go to Sleep.

Christine Lucas wakes everyday not knowing anything, who this middle-aged woman is in the mirror looking back at her, her surroundings or even the man she wakes up next to. Each day she has to learn all about herself again from her husband Ben; that she is forty seven and had a terrible accident twenty years earlier which destroyed her ability to form and retain new memories.

The only clues about her identity come from Ben and journals which she has kept, but how reliable can these accounts be if she can’t even remember writing them?

The novel unfurls to reveal that nothing and no one is quite as they seem as we, like Christine, begin to piece together fragments of her past to find out what happened to her, who she and Ben is.

The Woman in Cabin Number 10, by Ruth Ware

Our last book similar to The Guest List is the second appearance from Ruth Ware with another suspenseful novel called The Woman in Cabin Number 10.

Set at sea on a cruise ship, journalist Lo Blacklock is writing up her experience of a luxury week long cruise to see the Northern Lights. A seemingly lovely assignment and just what she needs to get over a traumatic break-in at her home which left her nearing the verge of paranoia and collapse.

All is as lovely and glamorous as she had imagined, that is until she is woken one night by the sounds of a woman screaming from the cabin next door and witnesses her being thrown overboard.

With every guest accounted for onboard Lo must figure out if she imagined it or if something far more sinister is going on – that she is trapped on board a ship in the middle of the ocean with a murderer.

Being set at sea gives The Woman in Cabin Number 10 a particularly chilling edge the perfect read for fans of thrillers and the murder mystery genre.

Some thrillers can be so frustrating, with the author working so hard to keep your interest only to ruin the novel with a flat ending! At times it can be enough to put you off the genre but I guarantee the books like The Guest List above will not disappoint. 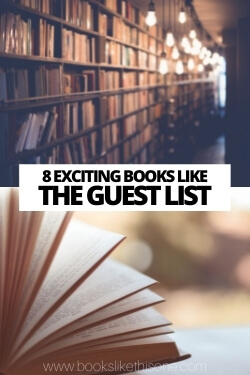