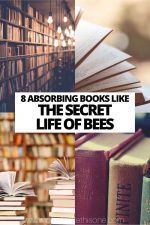 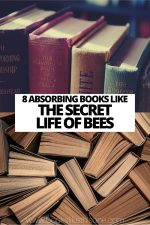 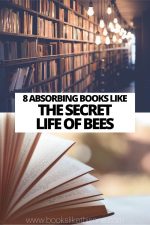 It is easy to become so engrossed in books like The Secret Life of Bees that you barely come up for air until you’ve reached the very last page.

In Sue Monk Kidd’s award-winning coming of age novel, we follow 14-year-old Lily Owens as she tries to escape her abusive father and the memory of her mother’s death, a memory which anchors the story.

With Rosaleen, her black maid and new mother figure in tow, Lily makes a break for freedom and they take up with three black beekeeping sisters called August, May and June little knowing their links to her own mother’s past.

Set ahead of the Civil Rights Movement in the South Carolina of 1964, The Secret Life of Bees explores the irrationality of racism, religion, the power of a female community and the importance of storytelling.

The list of absorbing books like The Secret Life of Bees which follow below explore similar themes in their captivating narratives with characters sure to break you heart, they are the perfect escape for the times we are enduring right now.

The Color Purple, by Alice Walker

Alice Walker won the Pulitzer Prize for her iconic novel The Color Purple, a fitting start to our list of compelling books.

The novel documents the life of Celie, an African American teenager growing up in rural Georgia in isolation, her traumas and eventual rise to some sort of triumph and contentment. How she suffers first at the hands of her father Alphonso, then the man she is forced to marry and his children from a previous marriage.

Told in epistolary form in letters to God and her sister Nettie which span the course of twenty years and depict Celie’s soul-crushing journey on the road to adulthood.

Despite facing some censoring issues due to the depictions of sexual and domestic abuse, homosexuality, racism and explicit violence, Walker’s novel is still one of the most important and influential novels today, 38 years after publication.

Touching on similar themes of religion, domestic abuse, racism and the strength in community, The Color Purple is a powerful read perfect for anyone looking for more books like The Secret Life of Bees.

The Bastard of Istanbul, by Elif Shafak

Elif Shafak is quickly becoming one of Turkey’s most honest, outspoken and critically acclaimed writers, The Bastard of Istanbul is her second novel written in English and tells the story of two families, one in Istanbul the other in the United States, whose histories are incredibly entwined.

The Kazanci family our cursed. All Kazanci men die young leaving behind all the women of the family. Nineteen-year-old Asya Kazanci, the titular “bastard,” lives with her mother and 3 aunts in Istanbul, her estranged uncle lives in America with his new wife and Armenian stepdaughter, Armanoush.

Curious about her heritage, Armanoush impulsively travels to Istanbul on the ultimate journey of self-discovery. Here she finds the Kazanci family and becomes fast friends with Asya little knowing there is much more linking the two families than her new stepfather, a link with dates back to 1915 to the Armenian deportations and genocide.

Bold, compulsive and evocative, Shafak adeptly explores religion, cultural history, family ties and female community in The Bastard of Istanbul an exceptional book perfect for fans of novels like The Secret Life of Bees.

Another Pulitzer Prize-winning novel next on this list of books similar to The Secret Life of Bees, its Toni Morrison’s dazzling novel Beloved.

Sethe has managed to outrun a lot of pain from her past including her escape from slavery, but she is unable to outrun one particularly haunting memory.

The death of her first daughter who she buried under a tombstone marked Beloved. Constantly reminded of her eldest daughter, whether through strange, poltergeist-like goings-on in the house or the monumental guilt she feels, Sethe is driven to near insanity.

But some years later she gets a chance at redemption when a teenage girl arrives on Sethe’s doorstep claiming to be her daughter Beloved. Sethe spoils Beloved with gifts, devoting all her time and money to making her happy, at her own and the rest of her family’s detriment, shrinking in size as Beloved becomes a larger and larger presence in their lives.

Inspired by a true event, Morison deftly explores the complexities of the mother-daughter relationship, the psychological effects of slavery and familial relationships, it is easy to see why Beloved is one of the most enduring works of American Literature.

It is the winter of 1964, a particularly terrible blizzard is raging on the night Dr David Henry’s wife, Norah, goes into labour forcing him to deliver his own twins. A perfectly healthy baby boy is born first, followed by his daughter who he sees has Down Syndrome.

Worried how Norah would react, he asks his nurse, Caroline, to take the baby away to an institution and informs Norah that the baby has died, a decision which will haunt them both forever.

Caroline, unable to give the baby up, moves away and raises her as her own giving her the love and support she needs. Their stories unfold over the next twenty-five years as these two families bound by their impulsive decisions of that one wintry night will surely, at some point, collide.

The Memory Keeper’s Daughter will keep you hooked until the very end, a truly captivating novel like The Secret Life of Bees.

Life experiences, secrets and the mother-daughter relationship is at the core of The Joy Luck Club, Amy Tan’s astute and immersive novel about four mothers and their daughters.

Over a weekly game of mahjong, four Chinese women, recent immigrants to San Francisco, tell stories of the lives they left behind in China. Stories which include unhappy marriages, surviving war, abandoning abusive family’s among many other heartbreaking accounts, united by their journeys and hopes for their daughters futures; this is the Joy Luck Club.

Written with insightful humour and structured somewhat like a game of mahjong with preceding parables relating to the game, Tan unravels the complexities of the parent child relationship across the lives of these eight women.

If you like The Secret Life of Bees for the exploration into the bonds of female communities then you are sure to enjoy these aspects in The Joy Luck Club too, this funny, honest, clever, tear-jerker of a book.

If it is the first-person perspective of a young protagonist coming-of-age like Lily Owens that has you on the hunt for more books like The Secret Life of Bees then look no further than Wally Lamb’s extraordinary novel, She’s Come Undone.

Dolores Price is 13 going on 30, with a wise mouth, big heart and wounds which run deeply. After her father leaves her mother for another woman, Dolores’ world is tipped upside down. She is forced to live with her strict Catholic grandmother, attend a strict Catholic school (where she is branded an outcast), and is then raped by her charming new neighbour.

All this triggers her undoing. Finding comfort only in TV and food, by the time she is 17, Dolores weighs over 250 pounds and quickly realises that the world is no kinder the more space you take up.

We follow Dolores through a suicide attempt, counselling, marriage, controlling husbands until she finally finds the love and the life she deserves, a former choice in Oprah’s Book Club, She’s Come Undone is a remarkable story.

Life of Pi, by Yann Martel

If you like the aspects of storytelling in novels like The Secret Life of Bees then you will particularly like this aspect of our next book, Life of Pi by Yann Martel.

Piscine “Pi” Molitor Patel is a young Tamil boy whose family own the Pondicherry zoo in India. Following disruption in the country, Pi’s father decides to move his family and animals to start a new, safer life in Canada, but the freight ship they were journeying on encountered a storm and sank.

Everyone drowned save for Pi, who managed to find a lifeboat along with an orangutan, zebra, a hyena and a tiger named Richard Parker. Pi spends 227 days stranded in the middle of the Pacific Ocean navigating survival against Mother Nature and Richard Parker.

Told retrospectively by an adult Pi, the reader is left wondering the actual course of events as Martel expertly questions the nature of reality and the difficulties encountered when retelling particularly traumatic stories.

Philosophical, fantastical, imaginative, inspiring, heartbreaking, spiritual – there are so many ways to describe the extraordinary Life of Pi.

The Mothers, by Brit Bennet

Like a lot of the novels on this list of absorbing books like The Secret Life of Bees, Brit Bennet’s debut The Mothers begins with a secret.

Mourning her mother’s recent suicide, seventeen-year-old Nadia Turner must navigate her final year of high school as well as her crippling grief. A romance blossoms between her and Luke Sheppard, the local pastor’s son, which results in an unwanted pregnancy.

Nadia ends up aborting the baby but tells no one what’s happened, not even her God-fearing best friend, Aubrey. The years go by, and Nadia, Luke and Aubrey are still paying for the choices they all made that particular summer well into adulthood.

Set within the confines of a black community in southern California, Bennet dissects ambition, love, grief, family, Christianity, shame and choice with such lyricism and perception, The Mothers is an absolutely captivating read, one well worth getting absorbed in.

Books like The Secret Life of Bees tick all the boxes as far as I’m concerned; riveting plots, believable characters, real-life settings, inspiring prose and they explore important issues. They are the kind of book that can be enjoyed time and again and never lose their magic.

Are you looking for more books like The Secret Life of Bees? Have any recommendations that didn’t make the list? Let us know in the comments! 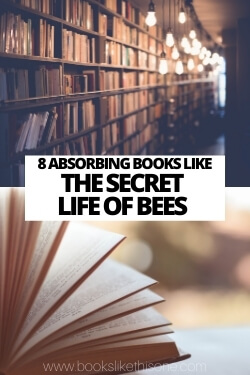