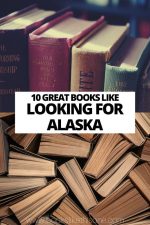 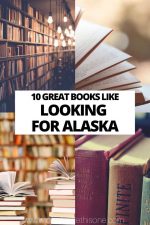 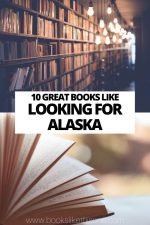 Before author John Green became one of the very first YouTube stars or fell into the public eye as the reigning king of young adult literature, he wrote his first novel, Looking for Alaska. An honest and startlingly realistic portrayal of adolescence set at a small boarding school in Alabama, the book deserves every bit of acclaim that it has received. If you have just finished reading John Green’s poignant first novel and are searching for books like Looking for Alaska, here are ten similar novels to put on your reading list.

The Perks of Being a Wallflower by Stephen Chbosky

If you enjoyed Looking for Alaska for its realistic portrayal of teenage life, issues, and friendships, then The Perks of Being a Wallflower is a great option for you.

Published in 1999, the novel is written completely in letters from the protagonist, Charlie, to an anonymous recipient. The book follows Charlie as he navigates his freshman year of high school in the early 1990s. Though initially shy and reserved, the school year sees Charlie come out of his shell, foster new friendships and face some troubling issues that are incredibly relevant to this day.

The book covers such topics like depression, suicide, abortion, sexual assault, drinking and drug use. Because of this controversial material, the novel continually finds itself on the American Library Association’s list of the most frequently challenged books.

Despite its controversy, however, The Perks of Being a Wallflower has continued to find itself on bestseller lists decades after its publication and was turned into a feature-length film in 2012.

Therefore, if you’re searching for books like Looking for Alaska because you enjoy an intelligent and honest depiction of teenage life, The Perks of Being a Wallflower is a great choice for you.

Have you already read this book? Check out our list of books like The Perks of Being a Wallflower!

A Separate Peace by John Knowles

If you enjoy reading about the boarding school setting, then John Knowles’ A Separate Peace is a fantastic option for you.

One of the quintessential members of the boarding school coming-of-age genre, A Separate Peace was published in 1959. Set at the Devon School, which is widely believed to be a fictionalised version Knowles’ alma mater of Phillips Exeter Academy, the novel follows the introverted protagonist Gene Forester as he develops a strong friendship with wild and outgoing Phineas “Finny” during the onslaught of WWII.

Exploring such subject matter as friendship, coming-of-age, patriotism, and a loss of innocence, this is another book that frequently finds itself on “most challenged” lists.

Though there are no female characters or any scenes describing sexual activity, the book has been accused of being “pornographic.” It has also been accused of promoting homoerotic relationships due to the fact that it explores a strong male friendship.

However, if you enjoy the boarding school genre and are searching for books like Looking for Alaska because you enjoy reading about a loss of innocence and fostering friendships, then A Separate Peace is a fantastic choice.

The Catcher in the Rye by JD Salinger

The book that continually finds itself on every list of Young Adult novels, if you’re on the hunt for books like Looking for Alaska, then you can’t go wrong with reading The Catcher in the Rye.

Originally published in 1951, The Catcher in the Rye follows protagonist Holden Caulfield over the course of a couple of days after he is expelled from his elite boarding school. Before heading home and facing his parents with the news of his expulsion, he spends time in New York City.

Known for being written in a colloquial, first-person style, The Catcher in the Rye explores Holden’s loss of innocence and coming of age as he explores New York on his own. It is also considered to be one of the most censored and challenged books of all time, known for its strong language and sexual themes.

For more book recommendations, browse our books like The Catcher in the Rye article!

It’s Kind of a Funny Story by Ned Vizzini

If you would like to read something more modern than the two aforementioned novels, then why not pick up It’s Kind of a Funny Story.

Published in 2006, the novel follows protagonist Craig Gilner, a 15-year-old high schooler who is suffering from depression. After being prescribed medication to deal with the pressure of his highly competitive high school, he subsequently stops taking the pills and contemplates suicide, leading him to be admitted into a psychiatric hospital for a period of time.

While in the hospital, Craig forges new friendships and deals with his crippling depression and anxiety, learning new things about himself in the process.

So, while it is not a novel about coming of age in a boarding school, if you’re searching for a book like Looking for Alaska, the late Ned Vizzini’s It’s Kind of a Funny Story explores many of the same themes and is sure to impress.

Turtles All the Way Down by John Green

If you are happy to read more of John Green’s brilliant work, then Turtles All the Way Down is an excellent choice for you!

Published in 2017, this is the most recent novel to grace this list and also the first with a female protagonist! Turtles All the Way Down follows 16-year-old Aza Holmes, a high school student from Indiana who struggles with OCD.

The book follows Aza as she kindles a romantic relationship with an old friend while continually struggling to manage her obsessive-compulsive behaviour. The novel is incredibly well-written and portrays with striking detail and empathy the struggles of being a teenager with a mental illness.

Therefore, if you’ve become a fan of John Green’s and are searching for books like Looking for Alaska, then make sure to pick up a copy of Turtles All the Way Down.

Perhaps the most obscure novel on this list of books like Looking for Alaska, that doesn’t mean that 1976’s Ordinary People isn’t a fantastic read.

This novel follows Conrad Jarrett, a 17-year-old high school student who is trying to return to a normal life after the death of his brother slightly more than a year previously and his subsequent suicide attempt and hospitalisation.

The novel is narrated both from Conrad’s perspective and from the perspective of his father, Calvin. It follows the family as Conrad returns to high school, fosters romantic relationships, and deals with the traumas of losing his brother with his therapist, Dr. Berger. It also follows the strained relationship between Conrad, Calvin and Conrad’s emotionally distant and hyper-critical mother.

Ordinary People is perhaps best known as the 1980 best picture winner starring Mary Tyler Moore, Donald Sutherland, and Timothy Hutton, however, the novel received much critical acclaim upon its publication and is a fantastic option if you’re looking for books like Looking for Alaska.

After a brief detour on this list of books like Looking for Alaska, we’re back on novels in the boarding school genre with Prep.

Curtis Sittenfeld’s debut novel, this book follows Lee Fiora as she navigated her way through all four years at an elite boarding school in Massachusetts. A scholarship student amongst the ultra-rich and privileged, she learns through trial and error how to make a name for herself while also dealing with the pains of adolescence.

A great insight into the world of New England preparatory academies and the trials of attending one, Prep is an excellent coming of age novel that is must-read for fans of Looking for Alaska.

The Spectacular Now by Tim Tharpe

The Spectacular Now, a great novel by Tim Tharpe, is an excellent addition to any list about books like Looking for Alaska.

This coming-of-age novel follows directionless party boy Sutter Keely during his last year of high school. At the beginning of the novel, he doesn’t care much for school, the prospect of university, or planning for his future in any way.

He then, by happenstance, meets introverted and intelligent Aimee and they begin to teach each other what is important to them in life.

Calling on themes such as friendship, coming-of-age, and a loss of innocence, The Spectacular Now was also turned into a feature film in 2013. However, the book is always better than the movie and Tim Tharpe’s 2008 novel is a great option if you’re searching for a book like Looking for Alaska.

If you are a big fan of the Young Adult genre, then you can’t go wrong with Rainbow Rowell’s Eleanor & Park.

Published in 2013, the novel follows the perspectives of 16-year-olds Park Sheridan and Eleanor Douglas, two high school students in the mid-1980s who come from very different backgrounds yet form a beautiful friendship and romantic relationship.

Park comes from a safe, middle-class background and is popular in school. Eleanor is overweight, poor, and lives with an abusive and alcoholic stepfather. The book deals with such issues as bullying, domestic abuse, and body image issues and will certainly tug on your heartstrings while making you deeply care for the characters.

Since its publication, Eleanor & Park has received much critical acclaim and it is a fantastic addition to any collection of books like Looking for Alaska.

The Fault in Our Stars by John Green

If you’re searching for books like Looking for Alaska because you are a fan of John Green, then you can’t go wrong with his most famous and popular book, The Fault in Our Stars.

This 2012 novel is told from the perspective of Hazel Lancaster, a 16-year-old girl with terminal thyroid cancer. Because of her illness, Hazel cannot attend regular high school with other students her age, however, she does attend a weekly cancer support group. Here is where she meets 17-year-old Augustus Waters.

Hazel and Augustus quickly develop a romance that is fuelled by their mutual adoration of a novel with a reclusive author. The Fault in Our Stars expertly deals with issues such as first love, loss, and coming of age with a terminal illness with heartbreaking accuracy.

The novel has received much critical acclaim and was turned into a feature film 2014. If you’re on the hunt for books like Looking for Alaska, then make sure to add The Fault in Our Stars to your reading list.

Already read this novel? Have a look at our list of books like The Fault in Our Stars!

Finding the perfect book like Looking for Alaska can be a daunting task. However, whether you’re looking for a classic or a more modern coming-of-age story, there are numerous novels that can fill the void after finishing John Green’s debut novel.

Are you looking for books like Looking for Alaska? Do you have any good recommendations? Let us know in the comments! 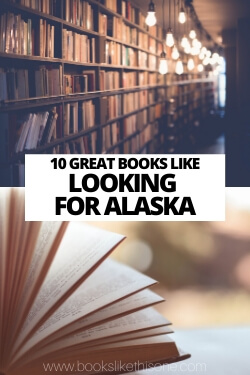