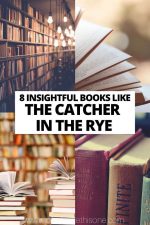 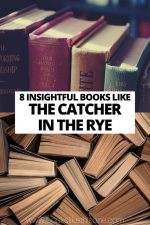 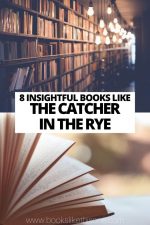 Published in 1951, J.D. Salinger’s skilfully composed, amusing and incredibly significant novel, The Catcher in the Rye is still poignantly relevant today and considered a modern classic of the coming of age genre which is why many people are always searching for more books like The Catcher in the Rye.

Now something of an icon for teenage angst and rebellion, the protagonist Holden Caulfield narrates his retrospective of three days from an unknown facility. These three days span Caulfield’s expulsion from Pencey Preparatory Academy, a boarding school, to his two wild days on the loose in New York City on a quest for connection, identity and some meaning to life, a quest which leaves him exhausted and emotionally unstable.

Exceptionally devised so that, while the novel explores topics of mental health, loss on multiple levels, alienation and finding ones place in this superficial “phony” world, readers get a glimpse inside the head of a complex and multifaceted character like Caulfield. It really is no wonder that The Catcher in the Rye is still praised and loved by adults and teenagers alike.

If you like Salinger’s masterful portrayal of Caulfield and are looking for more elaborate depictions of teenage angst and coming of age stories then this list of books like The Catcher in the Rye is sure to impress.

A Separate Peace, by John Knowles

Based on one of his earlier short stories entitled Phineas, A Separate Peace is the first novel by John Knowles to be published and has since become one of his best-known pieces. The narrative touches on similar aspects that fans of books like The Catcher in the Rye will enjoy, such as the depictions of friendship, jealousy, lost innocence and threats to one’s own identity.

The story sees narrator and protagonist Gene Forrester recall events from his childhood 15 years earlier following a visit to his old prep school, in particular, his competitive and ultimately tragic friendship with Phineas or Finny as he was nicknamed.

With World War II as an oppressive backdrop to his childhood, the story Forrester recalls is a story of two wars, not just the prominence of the actual battlefield but also the war within the human heart, as he wrestles with a mixture of jealousy and love for Finny, and it is this which makes A Separate Peace such a truly moving read.

Nobel prize winner William Golding published his classic coming of age tale, Lord of the Flies in 1954. The novel is also set in the middle of a raging war, where a plane evacuating school children is shot down leaving a group of surviving children stranded on a deserted island.

We follow their tragic attempts to govern themselves in the absence of adults with the group quickly becoming torn between building some sort of civilisation and descending into destructive chaos, giving into a savage primal calling. Anonymously narrated the wicked, surprisingly violent and unsparing nature of these boys depicts the instability of humans in the natural world with man’s inherent evil which echoes Holden Caulfield’s term “phonies.”

If you like The Catcher in the Rye because you like the themes of rebellion, individuality and the struggles of preserving innocence then you are sure to also enjoy Lord of the Flies.

Have you already read this book? Make sure to check out our list of more books like Lord of the Flies!

The Outsiders, by S. E. Hinton

The Outsiders is another story depicting chaos and violence amongst teenagers in the absence of adults as the novel centres around two rival gangs, the poor Greasers and the rich Socs or Socials as they navigate their way through a world of brutality, death and obligation.

S.E. Hinton’s novel portrays the tragic pitfalls of gang violence similar to the aforementioned The Lord of the Flies but also touches on similar ideas as The Catcher in the Rye. For example, internal and external conflicts, death, tragedy, loss, children and the preservation of innocence.

There is also the subjective view of the first-person narrative, in this case through Ponyboy one of the Greasers, who is also strongly presented as someone struggling to mature and outgrow their current life cycle which is why The Outsiders is a perfect choice for anyone looking for more books like The Catcher in the Rye.

Have you already read this book? Make sure to check out our list of more books like The Outsiders!

The Adventures of Huckleberry Finn, by Mark Twain

No list of coming of age books like The Catcher in the Rye would be complete without Mark Twain’s 1884 much-loved classic, The Adventures of Huckleberry Finn.

Written in the first person from Huckleberry ‘Huck’ Finn’s point of view we are invited along on another exciting escapade with the help of Huck’s well-known friend Tom Sawyer.

We follow them as deaths are faked, barges are looted, bandits are fought and elaborate escape plots are planned all while they wrestle with social values, conscience, superstitions and identity which is apparent throughout the course of the novel resulting in both hilarious, at times, and unexpected outcomes.

Set along the colourful and evocatively described Mississippi River, Twain cleverly tackles complex topics like racism, slavery and the hypocrisy of society while a whirlwind of events unfurl before the reader which is why The Adventures of Huckleberry Finn is still considered such a thrilling read today.

The next book strays slightly from the other more conventional coming-of-age titles on this list of books like The Catcher in the Rye, this is because The Little Prince by Antoine de Saint-Exupéry is often perceived as a children’s story, perhaps due to its fable-like allegory.

However, the novella has a lot of similar themes that are apparent within The Catcher in the Rye — like a quest for love and connection, loss and the dangers of narrow mindedness which the Little Prince discovers on his journey across different planets. Despite the connotations of being a children’s book, The Little Prince is Saint-Exupéry’s most successful piece, having sold millions of copies worldwide and been adapted into many different art forms.

It is through the Little Prince’s childlike and innocent perspectives, which constantly become conflicted with the intolerant and restricted views of adults, that a poignantly written observation of life and human nature has been formed leaving little doubt as to why The Little Prince has been such a success.

Have you already read this book? Make sure to check out our list of more books like The Little Prince!

A classic piece of American literature, Harper Lee’s Pulitzer Prize-winning To Kill a Mockingbird is still as successful today as it was immediately after its publication in 1960.

Loosely based on events Lee herself witnessed growing up in Alabama, the novel is narrated by the character Scout who recalls events from her childhood surrounding her lawyer father, Atticus Finch who ends up defending a black man accused of assaulting a white woman, her brother Jem and their fascination with elusive neighbour Boo Radley.

Set in the racist community of Maycomb, Lee masterfully highlights the “phony” nature of adults in the midst of serious conflict and the injustices of society through the eyes of children, all of which will ultimately change their lives and outlooks forever.

Despite the challenging issues raised in To Kill a Mockingbird it is written with warmth and humour and for that reason makes it a truly compelling read for any fan of novels like The Catcher in the Rye.

Have you already read this book? Make sure to check out our list of more books like To Kill a Mockingbird!

One Flew Over the Cuckoo’s Nest, by Ken Kesey

Despite being one of America’s most contested and disputed novels due to its portrayal of mental health, brutality and institutional processes, Ken Kesey’s 1962 novel One Flew Over the Cuckoo’s Nest still comes highly-acclaimed and has been turned into both a Broadway show and Academy Award-winning film.

Set in an institution similar, perhaps, to where Holden Caulfield appears to be telling The Catcher in the Rye from, we step inside the troubled head of ‘Chief’ Bromden as he recalls events leading up to his escape from a psychiatric hospital in Oregon.

Events which include his friend Randle Patrick McMurphy inciting a rebellion amongst the other patients against the oppressive and tyrannical authority of the evil Nurse Ratched with tragic ramifications.

The complex portrayal of mental health, what it leads you to do and how it leads you to think is a theme consistent with some of the other books compiled here, which means if you liked The Catcher in the Rye, then you are sure to enjoy One Flew Over the Cuckoo’s Nest, too.

Franny and Zooey, by J.D. Salinger

Last on the list of books similar to The Catcher in the Rye, we end where we started with another classic from J.D. Salinger, Franny and Zooey, which forms part of his popular series of stories surrounding the Glass family.

It is a two-section story initially published in The New Yorker — the first part focuses on Franny who has a mental breakdown due to the abhorrent ‘phoniness’ of the students in her school and the ego of the adult faculty which leaves her troubled and emotionally unstable, so she decides to seek spiritual solace.

The next part centres on Franny’s brother, Zooey and picks up where the first section leaves off with Zooey attempting to support his sister by providing brotherly advice and spiritual guidance in a bid to help her, and ultimately him, find peace.

Written after The Catcher in the Rye was published, Franny and Zooey still ignites similar themes which fans of Salinger’s style of writing and ideas are sure to enjoy.

If you looking for more books like The Catcher in the Rye because you enjoy a novel that explores particularly challenging topics, has a complex narrative structure and holds a mirror up to the double standards of society all while depicting turning points in the lives of the characters portrayed, then you are sure to be enthralled by the books compiled on this list.

Are you searching for books similar to The Catcher in the Rye? Have any recommendations that didn’t make the list? Let us know in the comments! 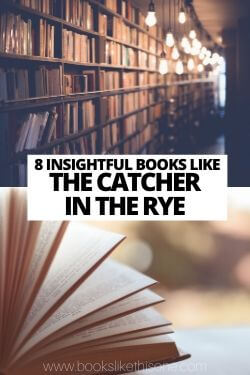