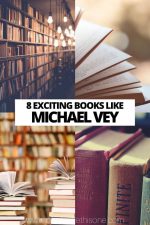 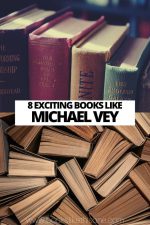 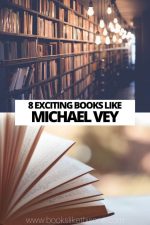 Are you searching for more books like Michael Vey?

What teenager (or adult, come to think of it) hasn’t dreamt of having a superpower? In the Michael Vey series of YA novels by Richard Paul Evans, the reader gets to live this dream vicariously through the character of Michael. However, like all dreams, the reality of having superpowers is very different.

Everyone thinks Michael is just another awkward teenager. He is scrawny and regularly bullied by other kids. The only difference between Michael and the other kids is the Tourette’s syndrome he was diagnosed with.

Yet there is one secret, Michael is hiding. He has an electro-magnetic power, and when he discovers that the prettiest most popular cheerleader at his High School has a similar power, the action suddenly ratchets up.

If you’ve read the Michael Vey series and are desperate for similar thrills, some of the suggestions below might electrify your interest.

The Accidental Hero, by Matt Myklusch

Books like Michael Vey enjoy giving a downtrodden teen a miraculous superpower. In The Accidental Hero, Jack Blank is our hapless hero.

All Jack knows is the bleak, dreary life of the orphanage he lives in. Things change fast when a robot from one of his comic books appears, trying to kill him. Then an emissary from a secret land called Imagine Nation arrives.

Both events show Jack that he is no ordinary boy. He is from Imagine Nation and possesses an incredible power, one that might save the world. Aside from the unsubtle ‘Imagine Nation’, this is a fast-paced and enjoyable read.

12-year-old Jack is a protagonist any boy who has ever felt lonely and bullied can identify with. What makes this stand out is the way it uses comic book ideas and makes them real. Perfect for any young adult pining to escape into fantasy.

The Flame of Olympus, by Kate O’Hearn

I love reading about Greek mythology, and books like Michael Vey can indulge my passion for this literary era.

The Flame of Olympus is a fun, fast-paced YA adventure combining some of the most memorable creatures and characters from Greek mythology. Emily is our young protagonist and her life changes forever, when the mythological winged horse, Pegasus, crashes onto her roof in New York.

Pegasus’s emergency landing thrusts Emily into the centre of a battle between the Roman gods (note: the Romans stole the Greek gods, but I will forgive the author’s use of Roman gods here) and stone warriors called, Nirads.

The Flame of Olympus is filled with monsters, a clandestine government agency looking to dissect Pegasus and two characters who bounce off each other very well. If you’re looking for a mythological adventure set in the modern age, look no further.

The Awakening, by Michael Carroll

Superheroes up against incredible odds are a mainstay for books like Michael Vey. In The Awakening, superhumans died or vanished over a decade ago following a major battle. Rumours of survivors blending back into society persist. Enter Danny and Colin, two 12-year-olds who find themselves going through more than puberty.

Danny can run faster than the speed of light and Colin’s physical strength grows exponentially. Their parents know, but so do other shadowy figures who will do anything to stop Danny and Colin.

What makes this middle-grade story work is the understanding of certain 12-year-old boy’s minds. Yes, the adults are written in simplistic ways, but when I was 12, that was how I viewed many adults. Nuance and subtly might not be strong elements, but this story is not intended to have either.

What it does have is fun descriptions of how Danny sees the world when moving at light speed, and solid villains out to get our heroes. A good read for any young teenager who’s ever dreamt of having superpowers.

The Unwanteds, by Lisa McMann

You often find many adult readers complaining about books like Michael Vey. They seem to be under the mistaken impression that a middle-grade story about superpowered boys and girls was written for them. The Unwanteds follows a similar tone to Michael Vey and is squarely written for young adults and middle-grade readers.

Every child in the land of Quill knows they will be labelled, Wanted, Necessary, or Unwanted when they turn 13. We follow Alex, twin brother of Aaron. Unlike Aaron, Alex is labelled ‘Unwanted’ and expects to die at age 13. Yet instead of the death farm, Alex is whisked away to a magical place called ‘Artimè’.

In Artimè, Alex and other Unwanteds are encouraged to cultivate their magical abilities. Yet, it’s unusual for twins not to be labelled the same, and soon Alex and Aaron are forced to fight in a magical battle for the survival of Artimè.

The Unwanteds follows Michael Vey’s ‘ordinary boy discovers superpower’ formula, but transposes it to a fantasy setting. Fun, simple, and great for any middle-grade reader.

The Eye of Minds, by James Dashner

Following in the footsteps of books like Michael Vey, comes this action-packed and creepy YA thriller from James Dashner. The Eye of Minds follows another Michael, except this Michael is a gamer. Like most gamers in Dashner’s world, Michael spends most of his time on the VirtNet (a VR online world – think ‘the Oasis’ from Ready Player One).

VirtNet is addictive and if you have the right amount of cash, can be a fully immersive experience. If you’re a hacker like Michael, you can have even more fun. That is until one gamer begins holding other players hostage inside VirtNet. The result is captive gamers being declared brain-dead in the real world.

The government want this rogue hacker stopped, and Michael might be the only hacker still alive and able to do it. Stories set within virtual worlds are growing more popular by the year. This is a fantastic mystery mixed with thrills, horror, action and an ending that will delight anyone who’s ever been a gamer.

I would happily read this again, simply to spot all the little clues Dashner drops like breadcrumbs throughout the narrative.

A lot of books like Michael Vey borrow liberally from other stories. Virals literally spins-off a set of stories from the Bones novels and TV series.

Tory Brennan is our protagonist and she is the niece of the now-famous Temperance Brennan. This story diverges from Bones as it details what happens to Tory and her teenaged gang of sci-fi obsessed friends. After rescuing a dog caged for medical testing, Tory and her friends are exposed to an experimental virus strain that gives them new abilities.

Reflexes and senses become animalistic, quick, and heightened. Just in time too, as the gang have to use their new powers to solve a cold-case murder, if they can stay alive that is. Blending sci-fi with mystery and fantasy, this slipstream genre novel is clever, witty and informative without being preachy. If you like Michael Vey, you should really enjoy this series from Kathy Reichs.

Mixing colourful magic with superhuman powers is prevalent in books like Michael Vey. Imagine eating sweets that make you unbreakable or weightless? That is the hook for The Candy Shop War, a sugar-buzzed novel from Brandon Mull.

A gang of young friends make friends with Mrs Belinda White, the owner of a new sweet shop on their local high street. But Mrs White is no ordinary sweet shop owner and sweet maker. Her sweets cause all sorts of strange and dangerously powered side effects.

Moreover, she’s recruiting her new young friends to help her find and retrieve the fountain of youth before her rival, Mr Stott (an ice cream van driver with a difference), gets there first.

It is hard to describe how silly and imaginative this book is. The little touches and flourishes are what make this story shine. Small things that Mull sprinkles in at the start, make a rewarding appearance at the end. A sweet treat from start to finish.

Books like Michael Vey delve into the unlimited imagination that exists within the mind of a child. In Story Thieves, Owen is just another young boy at school who prefers fantastical books to real life. That is until he sees his classmate, Bethany, climb out of a book in the library.

Owen discovers Bethany is half-fictional and is searching every book possible to find her missing ‘fictional’ father. Afraid others will learn her secret, Bethany makes a deal with Owen: she’ll take him into his favourite book series – Kiel Gnomenfoot – and in return, he’ll never tell anyone what he saw.

However, things aren’t that simple, and Owen soon finds himself in hot water and about to live out Kiel Gnomenfoot’s mortally final adventure.

Suspend your disbelief. Story Thieves reminds us all of why YA and children’s books can be so much more fun than a lot of adult novels. Bursting with imagination, this incredibly thrilling story of getting lost within stories will put a smile on your face.

The Michael Vey series of books are well-liked by young readers all over the world. The above titles are filled with superpowers, magical lands, awkward teens, and rich imagination. If you’re looking for books able to take you away from the real world, these will definitely put a smile in your mind.

Are you on the hunt for more books like Michael Vey? Have any recommendations that didn’t make the list? Let us know in the comments. 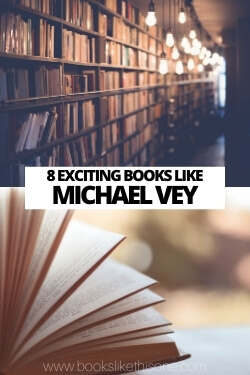