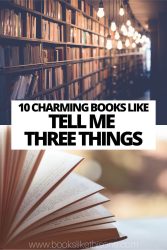 Books like Tell Me Three Things will pull at your heartstrings as you dive into each character’s story and hope they get the love they deserve.

In Tell Me Three Things, two years after losing her mother, Jessie and her father move to Los Angeles to live with his new wife’s family.

In a new place, life can get lonely and it does so for Jess. That is until she receives emails from “Somebody/Nobody” or “SN” for short. As their relationship evolves, the two have to decide if they’re ready to risk what they have to take it offline and into the real world or not.

Before dying, Lina’s mother makes her promise that she’ll go to Italy and get to know the man Lina assumes to be her father.

In her sorrow, Lina decides to spend the summer in Florence with Howard, but she has her walls up because she doesn’t understand why he wasn’t a part of her life. Things get a bit brighter when she receives her mother’s journal from her time in Italy.

Through the journal, Lina gets to know a different version of her mother and she gets to learn how she fell in love with her father. Along the way, she makes a great Italian-American friend named Ren.

Together they relive her mother’s past and unravel secrets that can change Lina’s life forever. Soon Italy will give Lina more than just Love & Gelato, it could be exactly what she needs.

Better Than the Movies, by Lynn Painter

When Liz loses her mother at a young age, she turns to the one thing they both loved doing together — watching romantic movies.

She loves and obsesses over these movies so much that she wants to create her own in real life.

After her longtime crush, Michael, moves back into town, she takes it as a sign to make him the “one.” But there’s only one person who can help her get him… her neighbour and competitor for the good parking spot, Wes.

In the process of their scheming, Liz gets to know the real Wes, and it turns out he’s not as bad as she thought.

While Liz needs to rethink her perception of love, she might also realise that her Better Than The Movies love story is much closer than she thinks.

What to Say Next, by Julie Buxbaum

Written by the same author as Tell Me Three Things, What to Say Next follows the sweet friendship of David and Kit.

After an awkward start with David asking about Kit’s father’s recent death, the two, who seem to be total opposites, end up having more in common than expected.

As David helps Kit make sense of her father’s death by finding out more about the car accident and getting closer to the truth, will their friendship survive the aftermath?

I’ve Got Your Number, by Sophie Kinsella

After losing her engagement ring which was part of her fiancé’s family heirloom, right before meeting her future in-laws for the first time, Poppy’s phone gets stolen to put the cherry on top of her bad day.

Just as she’s about to freak out, Poppy finds a phone in the trash and decides to borrow it. Now people can contact her if they find her ring, at least until the phone’s owner reaches out.

Not long after, Poppy is contacted by Sam, the phone’s owner, and he is demanding she returns his phone. She makes a deal with him to be his temporary assistant and give him his messages if he lets her keep the phone for a little longer.

Much like in Tell Me Three Things, Poppy and Sam only communicate via calls and messages just like Jess and SN exchange emails.

But somehow both couples form a connection. Sometimes things might happen for a reason and lead to happier endings like in I’ve Got Your Number.

While going through the aftermath of a bad breakup, having to move out of her ex-boyfriend’s apartment and not affording much on her own in London, Tiffy responds to a flatshare ad.

She not only has to share a flat with a guy but also a bed technically. Luckily the two have opposing schedules and are never in the flat at the same time, so it makes things less weird.

However, Tiffy and Leon quickly become friends through the little notes they write to each other and leave around the room. They even help one another with personal issues and despite not ever seeing each other, feelings may start to bloom.

But after months of their own routines, will their magical bubble be popped when they finally meet? Or will their connection grow even stronger in The Flatshare.

Imagine meeting the guy of your dreams on the anniversary of your traumatic accident and the day you’re moving across the country. On top of that, you’ve promised your mom to wait until you’re 23 years old to get into a serious relationship.

This happened to Fallon with Ben after he became her hero when she was on a lunch date with her father who seems to only care about himself and his past acting career.

The two spend the rest of the day together and end up agreeing to meet on November 9 each year until they’re both 23.

Similarly to Tell Me Three Things, Fallon and Ben share a bond that lets them stay close even if they’re on the opposite ends of the country, so after not speaking the rest of the year they pick up just where they had left off the past year.

However, sometimes it’s not all that you hoped it would be. Fallon will soon realise that Ben might not be telling her the truth and she has to decide whether she can trust his side of their love story.

The Beginning of Everything, by Robyn Schneider

Having to let go of his titles as tennis varsity captain, future homecoming king and boyfriend after a bad car accident, Ezra has to figure out who he really is with a broken leg and no popularity.

He’s lost everything he thought he wanted but then he meets Cassidy, who is new in school, and his hope for the future gets a little brighter. Just like SN gives Jess hope in Tell Me Three Things, Cassidy’s friendship can be just what Ezra needs.

However, when the two begin to date, Ezra might find out that Cassidy is hiding a much bigger secret than he would have ever imagined. A secret so terrible, it might ruin their memories of The Beginning of Everything.

When Keely turns 18 and realises she’s the last virgin in her senior class, she makes a plan to find the right guy to help her throw away that title.

Although she finds the “right” guy, a college guy named Dean who works with her, she has to rethink her plan since he’s too experienced. So when you’re in a situation like Keely who better to ask for help than your best guy friend, right?

Soon Keely and Andrew figure out what makes The Best Laid Plans to ensure nothing ruins their friendship. But is it possible to keep feelings out of it and what if the “right” guy was always right in front of you?

Would you marry your crush to help them and maybe slightly to help yourself?

After crushing on the cute and talented subway busker, and then getting him on Broadway thanks to her uncle being a musical director, Holland finds out about Calvin’s visa situation and figures that the only solution is marrying him.

Of course, it’s a plus that she already likes Calvin but she also genuinely likes helping others and believes in Calvin’s talents.

It’s great that the two get along so well and eventually, feelings start to develop. Like in Tell Me Three Things, Holland is there to help Calvin through a hard time just like SN was there for Jessie.

While being Roomies and all has its benefits, having to lie in more ways than one can come with its issues. Although Holland hasn’t been totally honest and she doesn’t want to get her hopes up, could she have the happy ending she’s been dreaming of?

If We Kiss, by Rachel Vail

Who knew that one kiss could have so much power?

While Charlotte’s first kiss with Kevin was good but a little less magical than she imagined it would be, it turns out that the hope for a second one could affect so many people she cared about.

After that kiss, Charlie finds out that her best friend is in love with Kevin as well and they even start to date! Then, her mother announces she’s fallen for Kevin’s dad, making Kevin a potential future stepbrother.

Similar to in Tell Me Three Things, Charlie now has to navigate through a new family life dynamic like Jessie. Even when she’s at home, she can’t get away from Kevin.

Now there’s a lot for Charlie to figure out, like what she wants and whether a kiss is worth the aftermath. Whichever path she chooses, she could end up with more than she knew she wanted in If We Kiss.

If you open yourself up to love, you might find it where you least expect it. This was clear in all of these books similar to Tell Me Three Things, when the characters opened their eyes and heart, it turned out that what they wanted was right in front of them.

Are you looking for books like Tell Me Three Things? Have any recommendations that didn’t make the list? Let us know in the comments! 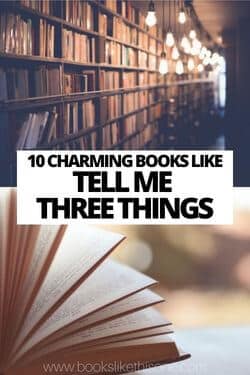