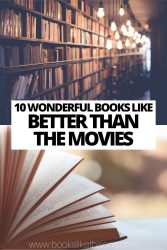 Queue the perfect romcom kiss scene because books like Better Than the Movies will give you all the happy endings your heart desires.

In this book, we learn that Liz is obsessed with romantic movies and will do whatever she can to recreate one in real life. She would even ask the neighbour she can’t stand to help her.

If she wasn’t so busy trying to make someone else fall for her, she might see that her movie romance is right in front of her.

It Starts with Us, Colleen Hoover

As the sequel to It End with Us, we get to see what happens after Lily divorces her abusive ex-husband and father of her daughter, and runs into the love of her life Atlas.

Although Lily still has to deal with her ex’s jealousy and him being a part of her life, she knows that he can’t stop her from being happy.

Like in Better Than the Movies, Lily and Atlas’s sweet love story started in high school under less-than-ideal circumstances. But even after so many years apart, they found their way to each other.

While they navigate through adulthood, dealing with ghosts from their past and a second chance at love, can the timing finally be right for Lily and Atlas in It Starts with Us?

As a successful literary agent, Nora knows she is vicious when it comes to getting her clients the deals they deserve. She knows others see her as a cold-hearted shark,  but they don’t know her career goals involve being financially stable to help her sister.

Because she is reserved, her dating life is nonexistent and her sister Libby is up for the challenge to help find a perfect romance novel love story for Nora.

So the two take a trip to Sunshine Falls for a necessary sister getaway and Libby pushes Nora to try new things. She never would have expected to find her rival Charlie in the same town or that they would be forced to spend more time together.

While Nora doesn’t see herself as a heroine, soon she will have to face the possibility that she also deserves a love story and a happy ending. But can she and Charlie be Book Lovers in the real world?

Trying to keep the promise she made to her mother on her deathbed, Lina begrudgingly agrees to spend the summer in Italy with the man she believes to be her father.

When she arrives and finds out where Howard lives, she starts planning her escape. But then she receives her mother’s old journal that she wrote while studying in Florence and it gives Lina a sense of having her mom close by.

Lina quickly becomes friends with a boy who lives nearby named Ren and together they experience Italy through her mom’s eyes.

Similar to Better Than the Movies, Lina lost her mother at a young age like Liz. Although she meets another boy she thinks she should fall for, in reality her heart knows exactly who’s right for her.

Along the way, Lina will not only find Love & Gelato but also answers to her mother’s secrets. But will she be ready for the truth?

When Hannah returns to Westport, after convincing her movie director boss to film their movie there, she decides to stay with her friend Fox so she doesn’t have to inconvenience her sister.

The summer prior, Hannah and Fox didn’t have the best first impressions of each other but after bonding over music and her moving back to LA, they continued growing their friendship via text.

Now with the two living under the same roof and spending so much time together, some lines may become blurry. But like in Better Than the Movies, Hannah will do her best to fight the attraction to save the friendship by focusing on her crush on the director.

However, Hannah may not be interested in anyone besides her sweet and considerate fisherman. He might even be the perfect catch for her in Hook, Line, and Sinker.

After her best friend starts falling for a guy Olive went on one date with and wasn’t at all interested in, she needs to find a way to reassure Anh that she’s totally fine with her dating him.

And what better way to show her full support than by kissing and fake-dating a handsome but not so liked professor.

Even though when they first kissed, Olive just kissed a guy at random, soon after Dr Carlsen, her new “boyfriend,” agrees to the arrangement because it will also help him with getting his frozen funds back.

As the two continue fooling everyone with their fake romance, slowly their relationship doesn’t seem so fake anymore. Olive will have to readjust The Love Hypothesis she first made, but will she be ready to put her heart on display?

The Soulmate Equation, by Christina Lauren

Growing up with an absentee mother, when Jess becomes a single mother herself she promises to prioritise her daughter even above her own needs. She doesn’t even make time for dating.

So when her best friend pushes her to submit a DNA sample to a new and revolutionary matchmaking company to find her soulmate, she is shocked by the results.

She not only matches 98 per cent with someone, but it happens to be one of the founders of the company and they don’t get off on the right foot.

But she can’t ignore the results when the company wants to use their high match score for promotion before the launch. Especially when the payments she’ll receive can help her family.

Although they’re initially forced into a relationship, Jess and River slowly start to enjoy their time together as the “Diamond” couple. But can Jess truly believe in The Soulmate Equation?

Things We Never Got Over, by Lucy Score

While her twin sister Tina grew up to be a troublemaker, Naomi had to do her best to balance her out by being the “good” twin.

On her wedding day, Naomi gets a call from Tina saying she needs help. Although Naomi knew her fiancé wasn’t right for her, she took Tina’s call as confirmation that she needed to get out of there.

When Naomi arrived to the town of Knockout, she is quickly hit with her sister’s evil ways. She also finds herself becoming the caretaker of the niece she never knew of.

To make matters worse, Tina has disappeared and Naomi has a grumpy untraditional hero helping her out. Their enemies-to-lovers romance is similar in Better Than the Movies.

Even when they try to fight it, Naomi and Knox’s connection is strong. But with everything else exploding in her life, can Naomi handle falling for a man who doesn’t want complicated in Things We Never Got Over.

In Would Like to Meet, Evie is tired of being an assistant, especially when she’s the one running the TV and film agency while her boss keeps making empty promises to promote her for years.

Now that the agency is in trouble, her boss threatens to fire her unless she can help their biggest client finish his romantic comedy script.

That will be a bigger challenge than anticipated when Evie finds out that Ezra, the writer, has writer’s block and he doesn’t believe people can fall in love in reality like in the movies.

While adding a meet-cute tester to her job description, Evie begins to test out various romantic scenes from popular romcoms to try to help inspire Ezra and save the agency.

But when she meets and slowly starts to fall for someone, will she be ready to open her heart to it in Would Like to Meet?

It’s always been hard for Georgette to be taken seriously by her family and town, especially since she’s a professional party clown.

While her family has a successful home renovation business, she opted out of it to start her own from the ground up in children’s party entertainment. Although, she’s ready to take off the clown paint and become a real businesswoman.

When she runs into her longtime crush and her brother’s best friend Travis she proposes for them to fake date. This is similar in Better Than the Movies, but Georgette will soon find out that this is not the way to get over her crush in Fix Her Up.

Laurie is left blindsided after her partner of almost two decades, who she also works with at the same law firm, breaks things off unexpectedly.

She can’t help but think of the reasons why she was left and has to figure out how to deal with seeing him every day. But luckily for her, the office’s player has a deal to help her out.

While out for drinks once, Jamie suggests they should fake date. It will make Laurie’s ex think that she’s over him which might make him regret his sudden decision to leave her. This plan will also help Jamie look better for the promotion to partner if he has a respectable girlfriend.

Although the plan would help Laurie get her ex’s attention, like in Better Than the Movies, soon she might realise her desire for someone else. But is Laurie ready to make that leap and will that person be ready to catch her in If I Never Met You.

While you can’t help fall for the sweet love stories in books similar to Better Than the Movies, you can cheer on the characters the whole way through until they find their happy endings.

Are you looking for books like Better Than the Movies? Have any recommendations that didn’t make the list? Let us know in the comments!