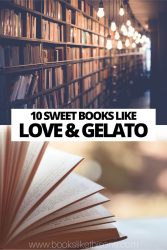 If you’re craving something sweet, books like Love & Gelato will satisfy your sweet tooth and much more.

In Love & Gelato, after Lina’s mother’s death, she discovers that the love of her mother’s life who she assumes is her father lives in Italy.

She begrudgingly agrees to spend the summer with Howard, but to her surprise, the trip will bring her closer to her mother and her own serving of love.

One Italian Summer, by Rebecca Serle

When Katy loses her mother and is feeling lost herself, she decides to take the Italian trip to Positano they had planned to take together.

Similar to in Love & Gelato, as Katy walks the same streets her mother did when she was around the same age as Katy, she can feel her mother walking alongside her. So much so, that she runs into the 30-year-old version of her mother and befriends her.

Although Katy doesn’t understand how her mother is in Italy with her, she is happy to get to know her mother at this age. While her mother seemed to always be all-knowing, the younger version is fighting to find herself.

Together, they can help one another find what they are each looking for in One Italian Summer.

Kisses and Croissants, by Anne-Sophie Jouhanneau

Getting to Paris, although a huge opportunity and travel goals destinations, is one of Mia’s biggest stepping stones to getting her into the ballet company of her dreams in New York.

While her main goal is to succeed in the summer ballet program, when she arrives she realises there could be more to this trip. Back home in America, she only had time for ballet and couldn’t afford any distractions, in Paris she slowly lets herself live for once.

Exploring the City of Love becomes even more delicious when she meets a french boy named Louis.

As they zoom around the city in his Vespa, sharing Kisses and Croissants, they also look into Mia’s family heritage to find proof of whether her grandma’s stories about ballet being in their blood are true or not.

But with her dreams at the tips of her fingers, can she really let herself fall in love and risk the future she’s worked so hard for?

The Riva siblings grew up knowing about their famous father but had no real relationship with him since he left them. This caused a lot of pain for each sibling but especially for their mother who turned to alcohol to cope with losing who she thought was her soulmate.

With an alcoholic mother and no father, the eldest child was left responsible for the younger ones.

Nina took on the role of the second mother even dropping out of school and modelling to provide for her family. She wasn’t interested in following her dreams as long as she could help her siblings with theirs.

Her brothers, Jay and Hud, went into professional surfing and photography while the youngest sister Kit was also a skilled surfer but wasn’t taken seriously.

They tried their best to separate themselves from their absentee father but he continued to be in the background.

As her life is falling apart, Nina is still forced to throw her annual end-of-summer party, which celebrities and people who want to be close to fame attend.

But this year, with so many secrets getting revealed, similar to what happens in Love & Gelato, something is bound to catch flames in Malibu Rising.

Every Summer After, by Carley Fortune

For six years, her family’s holiday cottage became a second home to Persephone and the family in the cottage next to hers became family to her as well.

But after she ruins her friendship with the boys next door, she knows she could never return to her favourite place and she doesn’t for more than a decade. That is until she receives a call with some bad news.

Having to return to the place where she made some of the best memories but one of the worst mistakes might force Percy to face the past and Sam, who she thought would be hers forever.

But when they put everything on the table, will there be anything left to save in Every Summer After?

When Jessie and her father move to Los Angeles from Chicago to live with his new wife just two years after her mother’s passing, Jessie is not so happy about it.

As she tries to adapt to a new city, new family, new everything and feeling her loneliness, she receives an email from Somebody/Nobody (SN). Soon they become friends and Jessie starts to depend on this person, which is something this book and Love & Gelato have in common.

Although Jessie is battling her feelings about wanting to meet SN in person but also not wanting to ruin what they have online, curiosity might beat her fears.

Can they continue their game of Tell Me Three Things in person or will meeting offline ruin everything?

Have you already read this novel? Check out our list of books like Tell Me Three Things!

The Roughest Draft, by Emily Wibberley and Austin Siegemund-Broka

After writing their second successful book together, four years pass with zero words or interactions between Katrina and Nathan.

Now the two must come together again to co-write the third book to complete their contract, although it won’t be pretty. Even if they pretend to get along to write the book, Katrina and Nathan will have to face the truth of what ended their partnership and friendship.

Similar to Lina and Ren from Love & Gelato, Katrina and Nathan have a connection that helps them understand each other on a different level than others. Through their writing, they can express themselves by putting parts of themselves into their characters.

But when it’s time to speak the truth out loud, will the two be able to put The Roughest Draft they’ve written and their feelings out in the open to work on rebuilding what they had?

Love in the Time of Serial Killers, by Alicia Thompson

After her father’s passing, Phoebe returns to her hometown in Florida for the summer. Although she has very few happy memories of her childhood there, she wants to help her younger brother clean and sell their father’s house.

Phoebe is finishing up her PhD studies with a dissertation about her biggest obsession – true crime. However, her research has left her jumpy and suspicious of strangers, like her neighbour Sam, who she keeps running into.

When she investigates him, she realises he might be scarier than she expected. Sam has the possibility of being a heart thief and she’s not at all ready to fall for anyone as nice and perfect as him.

As Phoebe tries to work through issues caused by her parent’s divorce while writing her dissertation and helping her brother, maybe she’ll be able to see that Love in the Time of Serial Killers might not be so bad after all.

The Cactus, by Sarah Haywood

Like a cactus, Susan likes to keep people at a safe distance with her own protective spikes and she wants to be in control of her life. After her mother’s death and then finding out she’s pregnant in her forties, she feels her control slipping away.

Similarly to Love & Gelato, this unexpected experience helps Susan feel closer to her mother and it shows her that it’s okay that her life is not going exactly as planned.

As she slowly learns to navigate through her new unplanned life, she finds support from her brother’s friend Rob which makes her feel less alone. Sometimes the baby comes before love, but it shouldn’t make the love less sweet. The change of timeline might be just what Susan needs in The Cactus.

Even with a rocky start to their friendship in college, Poppy and Alex became best friends and travelling companions for years. For ten years, their friendship is strong, that is until they have a falling out and don’t speak for two years.

Feeling miserable, Poppy extends an olive branch and plans a summer vacation in hopes of fixing their relationship. Like in Love & Gelato, a friendship between opposite genders can get tricky, especially when one or both people hide their feelings.

While Poppy does whatever she can to get her best friend back, maybe it’s time to truly listen to her heart and listen to Alex’s feelings. If she listens and opens up, then maybe they can build something even better together in People We Meet on Vacation.

Have you already read this novel? Check out our list of books like People We Meet on Vacation!

When she fails out of Vassar College, Vivian’s parents send her to live with her aunt in Manhattan. But little do they know, this will be the best experience for Vivian and will impact the rest of her life.

Like in Love & Gelato, City of Girls shows how independence and new surroundings can affect a young woman. Sometimes for better or worse, but it can still be beneficial for growth.

As a 95-year-old Vivian retells her story, starting in the 1940s, the reader will get to travel in time with her to experience dark moments in history as well as a love story like no other.

Books similar to Love & Gelato show different representations of love between family, friends, lovers and even of self-love. So get a scoop or two of gelato and let’s top it up with love from the list above of books that are so sweet you’ll be wanting seconds.

Are you looking for more books like Love & Gelato? Have any recommendations that didn’t make the list? Let us know in the comments! 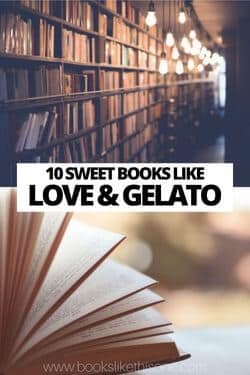