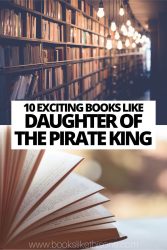 Are you searching for more books like Daughter of the Pirate King?

Being the daughter of the Pirate King comes with its downsides and its upsides. But knowing the sea like the back of your own hand is an advantage for someone who sails the oceans with her crew behind her.

When she is sent on a mission by her father to retrieve an ancient map that supposedly leads to treasure beyond the imagination, Alosa does the unthinkable: she allows herself to be captured by her enemy pirates. But this is all part of an elaborate plan to deceive them into thinking they have the upper hand whilst she searches their ship every night when they sleep.

Everything is going according to plan until the ship’s first mate, the handsome and irritating Riden, begins to unravel her perfect plot.

From New York Times bestselling author Tricia Levenseller, Daughter of the Pirate King is a fantasy adventure book full of pirates, sea creatures and romance. Jam-packed with action, it is the perfect read for fantasy lovers.

However, if you have already read this one, you are probably looking for books like Daughter of the Pirate King. But fret not! I have put together a list of ten similar books for you to pick up next.

In Dance of Thieves, we follow the imposing Ballenger empire who have ruled viciously for years, sending fear into the hearts of its people and even into the neighbouring kingdoms that bow down to their power.

This all begins to change when the empire’s patriarch dies leaving his son, Jase, to rule in his place. But in the empire’s moment of weakness, a young queen takes the chance to make a new start where fear of the Ballenger empire is no more.

When a legendary thief from the streets, Kazi, is sent by the queen to look into the inner workings of the empire, she realises there is more to Jase than anyone realised.

Both armed with their own secret intentions, feelings begin to brew between the pair but the fate of more than just their own hearts is at stake and they both have a choice to make.

This book similar to Daughter of the Pirate King is full of enemies-to-lovers drama and provides the reader with the perfect setting for a fantasy romance.

Every town has folklore and stories of ghosts that haunt the past but the ones that inhabit Penny’s town are more vicious than most. Two centuries ago, three sisters drowned to death after being accused of witchcraft in Penny’s town.

Now, in the present day, they return to enact their revenge by luring young boys into the waters and taking innocent lives, much like their own were taken.

On the day the sisters are due to arrive, a boy named Bo Carter turns up in the village with no idea of what he has walked into and the locals are scared and mistrustful. With no idea who to trust and with the ability to see what others cannot, Penny realises she has a huge choice to make.

A choice that ends with saving Bo’s life or saving her own. The Wicked Deep is full of secrets, and eerie atmospheric settings that will capture your attention and keep you reading.

In Fable, when the eponymous main character was thirteen, she watched her mother drown in a vicious storm.

The next day, when all she wanted was to hide from the world, she was shoved straight into the brutal reality of adulthood when her father, the most powerful trader in the Narrows, dumped her on an infamous island full of thieves and mercenaries.

With no food and no shelter, Fable is forced to stay alive with the knowledge of the skills her mother taught her just long enough to find her father and demand a place back on his ship.

Now seventeen and with the help of a trader named West, she attempts to leave the island but West isn’t who he says he is and Fable’s father’s strength has only multiplied since they last met and soon, Fable doesn’t know who she can trust.

With the main character having a powerful father who she doesn’t see eye to eye with, this book like Daughter of the Pirate King is great for those looking for their next read.

Once Upon a Broken Heart, by Stephanie Garber

From the author of Caraval comes Once Upon a Broken Heart, a spin-off series about the Prince of Hearts also known as Jacks.

Everyone knows you should never make a deal with a fate, especially one as broken-hearted and bitter as the Prince of Hearts. But the equally broken-hearted Evangeline is desperate to do anything to stop the love of her life from marrying someone else.

In exchange for his help, Evangeline promises Jack three kisses to be given when he commands with the person, place and time of his choice.

Three kisses seem harmless in the grand scheme of things until Evangeline must give out her first kiss and everything seems to spiral from there.

The Prince of Hearts has bigger plans for her than she first realised that will end in either her happily ever after or a tragedy worthy of the Greeks.

Pick up this book like Daughter of the Pirate King for an enthralling and fast-paced read about the choices you make set in a magic-filled world.

In We Hunt the Flame, Zafira is known as the Hunter.

A man who enters the forest of Arz to help feed her people but if her identity as a girl was exposed, everything would fall apart.

Nazir is known as the Prince of Death and kills anyone who defies the will of his father but he is as compassionate as he is deadly and if his father ever found out, the punishment would be beyond comprehension.

With war brewing and the Arz expanding across the lands, both the Hunter and the Prince of Death are sent on similar missions where their paths may cross to retrieve the artifact that could restore magic and stop the suffering.

Similar to Daughter of the Pirate King where titles and identities juxtapose the truth of their characters, this is a great and complex world to dive into for your next read.

To Kill a Kingdom is a pirate fantasy adventure which also happens to be a dark retelling of The Little Mermaid.

In this book, we meet a siren named Lira who, as the daughter of the Sea Queen, has a powerful reputation to uphold as the Prince’s Bane. Named so for the seventeen Prince’s hearts she keeps in the sand in her bedroom, she is renowned across the oceans.

That is until she kills a mermaid – one of her own – and is banished onto the land and turned into a human, the one thing sirens hate most.

Tasked with delivering Prince Elian’s heart to the Sea Queen by winter solstice, Lira is confident nothing can go wrong. But matters of the heart are unpredictable and the siren killer, Prince Elian is nothing like she thought he would be.

This enemies-to-lovers fantasy book like Daughter of the Pirate King is full of pirates, monsters and action is sure to be a great page-turner!

Have you already read this novel? Check out our list of books like To Kill a Kingdom!

If you like pirate, sea adventure vibes and you like reading a good old classic then pick up Treasure Island for a book similar to Daughter of the Pirate King.

When Jim Hawkins comes across a treasure map, he decides to set foot on a long journey in order to find the lost treasure which once belonged to the famous Captain Flint.

Along the way he meets various people such as Long John Silver – a one-legged cook – who leads a pirate mutiny against his captain.

With themes of young adult fantasy like coming of age, action-packed plot full of incredible atmosphere, this is the perfect pick for readers.

In Seafire, Caledonia is the captain of an all-female crew that sail the oceans battling against an oppressive regime and looking for revenge against the tyrant who controls the world they know.

When she was fourteen, Caledonia lost her family in a massacre and since that day has promised to get her revenge and cause havoc in any way they can for the men who call themselves the Bullets.

This action-packed adventure is great for readers who want a book like Daughter of the Pirate King yet want something less fantasy based.

Set in a high-fantasy world inspired by ancient Rome, in An Ember in the Ashes we meet Laia, who, viewed as a second-class citizen, is a slave fighting for her family by spying for the rebels against the empire that rules her world.

When her brother is imprisoned and accused of being an anti-empire rebel, Laia seeks out the Resistance and agrees to infiltrate the empire’s infamous military school in exchange for her brother’s freedom.

There, she meets Elias who wants to escape the empire himself. Together, they realise their paths are more intertwined than they ever believed.

This fantasy novel is a great book similar to Daughter of the Pirate King about family and the things you would do for them.

Have you already read this novel? Check out our list of books like An Ember in the Ashes!

All the Stars and Teeth, by Adalyn Grace

On the island kingdom where Amora lives, magic is a choice for everyone but her. As the heir to the throne, Amora must prove herself as a master of the throne’s soul magic to secure her place as Queen.

But when her demonstration goes wrong, she is forced to run and hide. Bastian, a mysterious pirate, makes a deal to help her prove her right to rule if she helps retrieve his stolen magic.

But life at sea holds more danger and excitement than she realised, with a new yet dangerous magic on the rise.

Much like in Daughter of the Pirate King, All the Stars and Teeth is full of magic and monsters that will make readers want to devour the entire book.

Jam-packed with vengeful mermaids, stowaways and monsters, these books are the perfect stories for fans of pirate books and the perfect replacement for readers looking for books like Daughter of the Pirate King.

Are you looking for more books similar to Daughter of the Pirate King? Have any recommendations that didn’t make the list? Let us know in the comments! 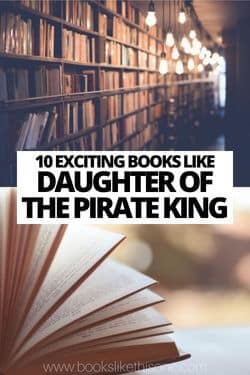