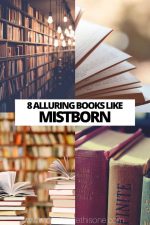 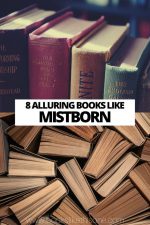 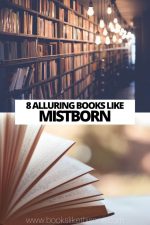 Ash falls from the sky. Unnatural mist clouds the night. Evil is everywhere, threatening to stifle all life in the lands of Scadrial. This is my own version of the book blurb that describes the opening to Brandon Sanderson’s epic Mistborn series. It is hard to believe the first book, The Final Empire, came out in 2006.

Since then Sanderson has written so much more and even cobbled together a companion linking the two original Mistborn trilogies together. This is an author who is verbose to say the least. If you’d like to understand him a bit better, I highly recommend the excellent Writing Excuses podcast which he co-created and hosts with a number of other highly successful writers.

If you’re done with the Mistborn series but are looking for similar titles, then some of the following recommendations may sate your fantasy appetite.

The Magician’s Guild (Book 1 of the Black Magician Trilogy), by Trudi Canavan

Books like the Mistborn series are packed full of magic, treachery, quests and epic stakes. But where Sanderson’s prose has been cited as an example of ‘prose out of control’, Canavan’s story remains tightly focused on Sonea. Sonea is a young girl from the slums in a world where magic is commonplace.

The adventure begins when she throws a stone through a magician’s barrier, accidentally injuring the magician behind it. With the powerful Magician’s Guild now on her tail, Sonea must quickly learn and control her natural magical potential.

On the face of it, Canavan’s tale seems a lot simpler than Sanderson’s epic. And in a way, it is. However, The Magician’s Guild also focuses a lot on both the characters and world in which they live. Sonea is likeable, making the world she inhabits accessible to people approaching fantasy for the first time. Recommended for Sanderson fans, and non-fans alike.

The Blade Itself (Book 1 of The First Law), by Joe Abercrombie

Gritty, dark and funny are not terms you expect when comparing books like the Mistborn series. Whilst humour is present in Sanderson’s epics, Abercrombie sprinkles it with glee throughout the graphically violent but very funny The Blade Itself.

You know you’re in a for a good read when one of the main characters is called Logen Ninefingers, a famously brutal barbarian who’s luck is just about to run out. But Logen is not alone, and as you read about nobleman Captain Jezal dan Luthar (dashingly smarmy) and Inquisitor Glokta (cripple turned torturer) as their stories intertwine with Ninefingers, you can’t help but be pulled along.

Add a wizard (who may or may not be a fraud) with the worst assistant ever, and it becomes hard to put The Blade Itself down.

Fans of Mistborn should enjoy this richly imagined and very gritty world of magic, backstabbing (literal in places) and cinematic action.

I have spoken about Graceling in a previous article, but it more than earns its place here when comparing books like Mistborn. Any story with a girl who has been able to kill a man with her bare hands since she was eight will pique a reader’s interest.

Graceling has a richly imagined medieval-type world filled with rich characters and unforgettable moments of brutality alongside romance. To say it blends genre would be a slight understatement. Katsa may be naive, but boy is she dangerous.

Whilst the story may not have the epic scope of Mistborn or The Wheel of Time, it does have magic, battles and desperate situations.

There are some criticisms of Graceling’s portrayal of the ‘strong, female character’ (why can’t Katsa like dresses and still be a kick-arse heroine?), but overall this is a well-told fantasy mixed with romance and violence.

Katsa is morally ambiguous throughout, and though I could have done without her falling for Prince Po (it isn’t really necessary for her arc in my opinion), I did enjoy reading the story to the end. Worth a read if you’re looking for similar titles to Mistborn.

The Black Prism, by Brent Weeks

Books like Mistborn are often populated with characters you love and characters you love to hate. The Black Prism introduces us to Guile, a man you can’t help but love reading about, even when at the same time you want to smack him in the face. Guile is the Prism. Essentially the most powerful man in the world.

A high priest and Emperor. Charming. Intelligent. Strong. He also knows it won’t last though, because Guile is fully aware of when he will die. That alone intrigued me. Imagine knowing when you’re going to die? The stakes are upped when Guile discovers he has a son living in a kingdom far away.

A son raised after a war that put Guile in power. Our anti-hero must decide whether or not to protect a secret he’s long-held close to his own heart. There were parts of The Black Prism that made me want to bash my head against the wall over Weeks’ use of sexist female stereotypes.

Fantasy written sixty years earlier may be forgiven for tropes like this, but there has to be a realistic in-world reason for following a trope like this today. Why do we need to know which women are the prettiest? Why is it necessary to describe a forty-year-old female character as ‘still beautiful’ despite her wrinkles? It is an odd choice in an otherwise interesting story, though some have argued as in-line with the world Weeks has created.

Despite some jarring narrative bumps, this novel does have a winner in the ingeniously clever magic system Weeks has created. It takes a while to work it out, but when you do, you are left grinning from ear to ear. If you liked Mistborn, you’ll enjoy The Black Prism.

The Deed of Paksenarrion (Omnibus), by Elizabeth Moon

Learning to pronounce a character name is commonplace when reading books like Mistborn. Paksenarrion Dorthansdotter seems to understand this, and we are introduced to her simply as Paks. She is a simple sheepfarmer’s daughter who yearns for adventure but is told she cannot be anything but a farmer.

The final straw comes when Paks’s father arranges a marriage, leading Paks to head out on her own and join a mercenary company. Along the way, she meets dwarves, elves and humans as she discovers her own skill as a gifted paladin. This is the first book in a series published between 1988 and 1992.

It shows little age narratively speaking, and is a thoroughly enjoyable fantasy read. With books two and three following Paks as she parts from the mercenary company to find her own destiny, these books are difficult to put down.

And if you ever wanted to know the details of a paladin’s life complete with the intricacies of their day-to-day existence, The Deed of Paksenarrion is your drug.

The Name of the Wind, by Patrick Rothfuss

Strange names and odder settings are scattered throughout books like Mistborn and The Name of the Wind is no exception. Kvothe is the most powerful and notorious wizard his world has ever seen. But the story is not about Kvothe now. It is about Kvothe recounting his rise and fall from power to a Chronicler, and he does so in a very poetic manner.

Kvothe is now a mere innkeeper, but the story he tells is far removed from this simple life. Kvothe’s story has become a highly acclaimed fantasy book since release, gathering high reader reviews and award nominations aplenty.

Rothfuss has blended character, plot and setting well, each serving the other without ever taking centre stage. Perhaps it is this blend that makes The Name of the Wind such a joy to read.

I found myself getting lost within Kvothe’s tale, following him from a poor boy to an almighty wizard before his eventual fall from grace. The plot is nothing wholly new, but the telling is in the tale.

Here we have a storyteller who knows the power his words hold. He respects them and gives them the due they deserve resulting in a novel that gently holds your hand as it guides you through Kvothe’s life. A very good read.

Already read this series? Check out our list of more books like The Name of the Wind!

Assassin’s Apprentice (Book 1 of The Farseer Trilogy), by Robin Hobb

Magical assassins? I’m in. The first book of The Farseer Trilogy drops us in a medieval-style world to follow Fitz, a royal bastard who was cast out into the world before returning to court to train as a royal assassin. Told in the first person we see everything through Fitz’s eyes bringing us that much closer to his character.

The first-person perspective comes in for a lot of criticism from some in the reading community, but Hobb handles it deftly in Assassin’s Apprentice. She breathes life into Fitz’s interactions and relationships with other people, making the characters you read feel like real people. That is always a sign of great writing in my opinion. You can really empathise with Fitz as he wrestles with the constraints imposed on him by the rigid court structure.

Yes, there are fantasy tropes galore, but rather than relying on them, Hobb merely uses them as a framework in which her characters and story can thrive. If you like the Mistborn series, you’ll enjoy The Farseer Trilogy.

The Eye of the World (Book 1 of The Wheel of Time), by Robert Jordan

Where better to finish than with Robert Jordan’s touchstone and a series that Brandon Sanderson himself completed? Whilst the middle of the Wheel of Time series is justifiably criticised for being ‘a bit saggy’, the opening books are great.

The Eye of the World follows the classic fantasy trope of naive-boy-who-is-different, being taken under the wing of a more knowledgeable and powerful mentor as they embark on an epic journey. The Eye of the World borrows heavily from Lord of the Rings et al, but it does so with a reverence and childish joy that can’t help but make you smile.

I remember the original cover art looking a bit silly and over the top, but in a way, that’s what made me want to read it. Like The Sword of Shannara, The Eye of the World does begin a little predictively but soon veers off to chart its own course.

If you are at all interested in fantasy, then you should at least give The Eye of the World a read. You might be surprised by how much you enjoy it.

Already know and love this series? Check out our list of more books like The Wheel of Time!

The Mistborn series will be remembered as a good fantasy read for years to come. A testament to Sanderson’s obvious passion for the genre. The above titles were chosen simply because they best represent the joy and fun often found in epic fantasy novels like Mistborn.

Are you searching for more books like Mistborn? Have any recommendations that didn’t make the list? Let us know in the comments! 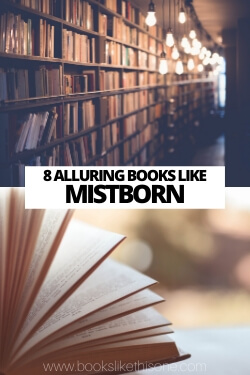