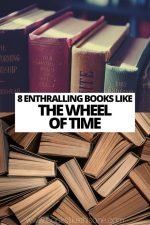 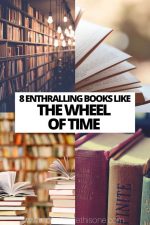 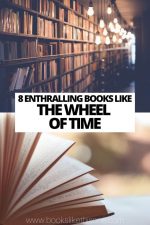 Epic fantasy sagas don’t come much bigger than The Wheel of Time by Robert Jordan and completed by Brandon Sanderson. Beginning in a similar vein to the opening of Lord of the Rings, The Wheel of Time series soon leaves the 20th-century father of modern fantasy trailing in its wake. Filled with characters and monsters, plots and political machinations, summarising the epic series is hard to do. But if you love books like The Wheel of Time, it’s probable you will enjoy at least a few of the following titles.

Mixing time travel with fantasy, books like The Wheel of Time rarely play with this concept more than Dragons of Autumn Twilight, the first books of the Chronicles Trilogy by Margaret Weis. There are north of 100 books set in this world (the whole series is known as the Dragonlance Chronicles), but this is the one you should start with.

Set after a great cataclysm has occurred, the story revolves around a group of adventurers who meet at a pub (‘inn’ if you insist on the fantasy term) trying to search for what was lost from the world of Krynn.

Easily comparable to titles like The Wheel of Time and The Sword of Shannara, Dragons of Autumn Twilight is like a supercharged game of Dungeons and Dragons. And not in a bad way either.

Worth a read, especially now when escaping our own world is preferable to reality.

The Poppy War, by R.F. Kuang

“Grimdark” has become the latest genre that surrounds books like The Wheel of Time. Applied to fantasy that is characterised by the bleak and often grim events that occur within the story. The term is quite apt for The Poppy War.

When a war orphan aces an empire-wide test to find the most talented youth, no one, least of all the authorities can believe it. Rin is plagued by accusations of cheating and more as she enters the elite military academy of Sinegard. Being dark-skinned and different doesn’t help but Rin does possess a dangerous power the other students do not; she has an aptitude for Shamanism.

Any fan of fantasy should read this book, not least because it eschews western fantasy tropes drawing primarily on the bloody history of 20th century China. Rin’s determination to succeed amidst a constant barrage of being told she will never be equal to her classmates (all sons and daughters of powerful warlords) is startlingly realised and frequently violent.

The Shadow of What Was Lost, by James Islington

Books like The Wheel of Time are often described in a hyperbolic manner. Not so with The Shadow of What Was Lost.

Published in 2014, it follows a young Augur (people who can see the future) called Davian in his reluctant quest to protect the world from demons as a mystical barrier begins to fail.

It is always nice to read a fantasy world that has its magic system fully fleshed out. For us to believe in magic, we like to feel that it makes sense in the rules of the world. Islington does a sterling job of making you believe that this magic system is real and obeys the natural laws of the world his story is set in.

Davian is a strong protagonist and I enjoyed following him on his journey to become the man he does, but it is Caeden who stood out more. Caeden’s emotional arc and denouement are perfectly pitched and without revealing anything, elevate this story above others.

The Way of Kings, by Brandon Sanderson

When your own work is compared to The Wheel of Time — a story you yourself completed — you know you’ve written something that chimes with readers. Sanderson is a living master of fantasy world-building and character.

The Way of Kings makes you look up at the stars and wonder what levels of mysteries await discovery, right before you hope they are at least half as exciting as those found in Sanderson’s world. Set on a world where a recurring disaster means that human survival is constantly hanging in the balance, The Way of Kings pulls you along without ever making you feel like an alien.

Sanderson loves flitting between character viewpoints and this book is no exception. No less than 6 characters make up the principles with the interludes following other, seemingly minor, characters. An assassin, a high prince, a magical knight… all of these and more are present in Sanderson’s epic.

A Time of Exile, by Katherine Kerr

Magic is often a core component in books like The Wheel of Time, even when it is subtly included in the background. A Time of Exile is the first book in the second Westlands series. Political intrigue and plotting permeate this tale as the half-elfin Rhodry of Aberwyn ages slowly, exacerbating his own son’s impatience to rule.

When Rhodry’s old flame, Jill, a former mercenary arrives, Rhodry takes the opportunity to fake his own death and go in search of his roots. You don’t realise who Rhodry is until later and it is a fun and entertaining plot development.

Twisted magic, elves, wizards, reincarnation and more are all played with delightfully by Kerr. A good solid fantasy that sits well with anyone who’s a fan of The Wheel of Time.

Books like The Wheel of Time often play with religious themes and ideals, often highlighting their often unhealthy relationships with politics. The Empire Trilogy is one of the best examples of how well fantasy and politics mix and fans of A Game of Thrones will love these books.

Set on the world of Kelewan, Mara is a novitiate in a convent who has to plot, bend tradition and do things she otherwise wouldn’t do in order to survive and protect her own people.

She is a fascinating protagonist, not least because you can empathise with many of her travails. If a corrupt council of wealthy politicos threatened the lives of everyone you loved simply because they were inconvenient, how far would you go?

Co-written books can be a mixed bag as it depends solely on each author’s ability to blend style and substance successfully. Feist and Wurts make a powerful duet as they spin this epic tale.

Throne of the Crescent Moon, by Saladin Ahmed

He is a ghul hunter based in the city of Dhamsawaat and has grown weary of fighting and adventure. However what fun would a fantasy novel be without an antagonist present to spoil the protagonist’s plans? Enter a dark sorcerer gleefully threatening lives. Reluctantly the doctor is pulled from his retirement plans to combat the threat, bringing in several of his old friends to help.

What makes this book stand out is the way it meshes a fairly straightforward ‘Kill the bad guy’ plot with a murkier and very engaging political story. Drawing on middle eastern culture and myth, Throne of the Crescent Moon has been praised for being different to the usual western-centric fantasy novels that fill bookshelves across Europe.

Plus it’s hard not to smile at a protagonist who just wants to retire and quietly sip Cardamom tea.

Le Guin’s fantasy stories serve as a useful introduction for books like The Wheel of Time. A Wizard of Earthsea was first published in 1968 with the last The Other Wind being published in 2001.

Following primarily the arch-mage Ged from his humble beginnings as a village boy on a remote island to his rise as one of the most powerful wizards of the age, Le Guin never considered The Earthsea Cycle to be a series. She thought of them more as individual novels set in the same world. And when you read them, it is hard to disagree with her.

Each Earthsea novel can be read without having any previous knowledge of the other books. That is the series’ strength, although some might claim it to be a weakness as well. Many authors can learn a lot from Le Guin. Learning how to tell individual stories within a wider series setting is a huge achievement. The fact Le Guin and others like Anne McCaffrey managed it, is a testament to both their skills and brevity.

Finding series and books like The Wheel of Time can be daunting as many choices are presented. It is a testament to the enduring power of fantasy, that we are lucky to have so many titles to choose from.

Do you agree with our choices? Something not on our list that you think should be? Let us know in the comments! 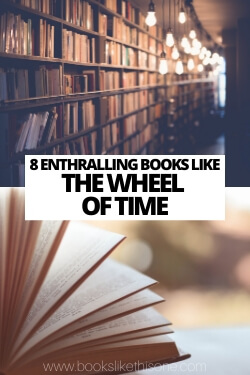