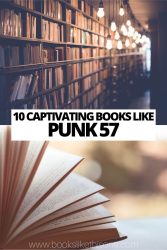 If you enjoy a real love story with all the messiness of life, then you will love books like Punk 57.

In Punk 57, Misha and Ryen have been pen pals and best friends for seven years without ever having met in person. Yet they still built a bond so strong that they feel safe to be themselves with each other.

When months go by without a letter arriving, Ryen is left feeling alone and in the dark. Misha has disappeared and a new student at school is looking for ever creative ways to humiliate her.

While Ryen cracks without Misha’s support, we will also hear his side of the story.

Written by the same author as Punk 57, Bully has a similar friends-to-enemies-to-lovers theme to it.

Tate and Jared were best friends for years until the start of high school when Jared suddenly wants nothing to do with her. Not only that, but Jared bullies and pulls pranks on Tate any chance he gets.

After studying abroad for her junior year, Tate returns to complete her senior year and is ready to fight back.

Like Ryen from Punk 57, Tate will have to find the strength to break down her bully and figure out if what is left is worth her love and trust.

What would you do if on the same day you meet the perfect guy, you plan on moving across the country?

When Fallon meets Ben, while she was on a dreadful lunch with her self-centred dad, he becomes her knight in shiny armour. From the moment they meet, he makes her see her own beauty because of her scars not despite them.

After spending the rest of the day together, they can’t help but lean into the connection. Unfortunately, Fallon is moving to New York and Ben lives in Los Angeles.

But they make a plan to live their lives, explore their careers and meet each year on November 9 until they both turn 23 years old.

With zero contact throughout the year except for the one day they meet up, things are bound to get messy. But can this be a love story for the ages or all a bunch of lies?

Sometimes falling in love with the right person at the wrong time can be like being pushed out of a plane without a parachute. In After and other books like Punk 57, first love can be beautiful at times but so intense and painful at others.

When Tessa meets Hardin on her first day at college, she couldn’t have pictured the long journey with him ahead. One day he’s cold, the next he’s hot and Tessa cannot guess which Hardin she’ll get that day.

Even at his cruelest, when Tessa hates him, she also can’t help but continue falling for him. Even when Hardin pushes her away, she holds on tighter because she believes she can save him.

Tessa will have to decide if it’s worth losing herself to find the good side of Hardin and whether she can ever go back to her life before him.

After a hard, traumatic childhood, Willa and her sister find an escape from their toxic mother and start over in a new place.

While Willa uses photography as therapy, she is actually great at it and even wins a contest to take photos in Dublin. This could be just what she needs after breaking up with a boyfriend she doesn’t think she deserves.

As part of the prize, Willa also gets to stay in the inn above a pub, which is where she meets the moody bar-owner Shane who she later finds out is a successful Formula One driver.

Similarly to Punk 57, both Willa and Shane have trouble dealing with past trauma which makes it difficult for them to open up and trust new people. But maybe it can be another thing they have in common, along with their dislike of one another.

As Willa and Shane slowly give into their attraction, will they be able to leave their past behind to potentially start a future together or are they really Unfixable?

The Mister, by E.L. James

From one day to the next Maxim goes from being a privileged party boy who likes photography and music to becoming a royal Earl after a tragic accident.

Now he has to be responsible not only for his family’s wealth and estates but everything else that comes with the noble title.

While he struggles with the new role, he also has to control his desire for his house cleaner Alessia who is new to England from Albania and appears to be running from something.

When the danger following Alessia continues coming after her, Maxim will do anything he can to protect her. With their adoration of music and growing feelings for each other, can it be enough to save one another in The Mister?

When Macy was only 10 years old her mother died of cancer, but she left Macy’s father a list of advice for parenting. In some ways it was like her mother was still part of raising Macy.

Following a point on the list, Macy and her father buy a vacation home outside San Francisco near the water where they could escape to whenever they want. This is where she meets her long-time best friend and reading companion Elliot.

Over the years they get closer and even date for a few months during their senior year, until one of Macy’s worse days results in the end of their relationship and friendship.

Then when they run into each other 11 years later and their feelings are stronger than ever they will have to give their sides of the story if they want to have a future together. But will the truth open up more wounds or heal them both in Love and Other Words?

The Risk, by Elle Kennedy

Brenna is seen as the distant bad girl who usually has guy friends because she doesn’t trust most girls and being the daughter of Briar’s hockey coach means you’re constantly surrounded by hockey.

When Brenna interviews for a sports broadcasting internship at one of her dream stations, she realises the only chance she has to get the position is to pretend she knows and is dating Harvard’s star hockey player Jake.

While she has met him a few times and can admit there’s an attraction between them she can’t stand him – not to mention he’s on the rival team.

Although relationships in books similar to Punk 57 often start with the characters disliking each other, they quickly learn that the line between love and hate is almost non-existent.

As Jake and Brenna make a deal and pretend to date, some lines will definitely be crossed but can Brenna really trust a Harvard player with her heart and is she ready to take The Risk?

After her 18th birthday party, Keely is officially the only known virgin in her senior class. Now more than ever, she’s ready to give up that title but other than her best guy friend there are no decent guys at school.

So when she meets a cool college guy named Dean, she feels like she finally found the right guy to lose her virginity to.

However, she’s too intimidated by how experienced he is so maybe she needs to go back to giving it up to her best friend Andrew.

The only problem is how to ensure the friendship stays the same after and make sure nothing gets confusing. But can Keely and Andrew stick to The Best Laid Plans?

Growing up with an abusive father, Lily promised herself to not let history repeat itself and be stronger than her mother by getting out of a bad relationship immediately.

After her father’s death, she moves to Boston and opens a flower shop. She feels silly to admit it but she made the move because her first love Atlas dreamed about moving there one day.

On her first night in town, she meets Ryle. A neurosurgeon who says he doesn’t do serious relationships but Lily soon finds herself being the exception to that rule. Everything seems so perfect and a little too good to be true.

The characters in It Ends With Us have to deal with past trauma that can affect their relationships without them knowing and not acknowledging those issues can blow up in a big way later.

Then one night, Lily sees Atlas and she can’t help but feel like there’s a reason he would come back into her life. But can this encounter be enough to threaten her relationship or is it just a warning for the future?

Have you already read this novel? Check out our list of books It Ends With Us!

When they first met in college Alex and Poppy didn’t instantly click but they became best friends after their first trip together.

Together they plan summer trips for ten years, until one of those years causes them to stop talking to each other. This was a similar situation as in other books like Punk 57, where the communication is cut off without the other person knowing what happened.

Then two years after that dreadful trip, Poppy reaches out, because she needs her best friend back. She realises she hasn’t been happy since those vacations with Alex.

So as she plans what could be their last vacation together and their only chance to rebuild their friendship, she needs to decide whether she’s ready to upgrade their relationship or lose Alex forever in People We Meet on Vacation.

Have you already read this novel? Check out our list of books People We Meet on Vacation!

While these books might rip at your heart, they won’t let you lose hope that the characters will get through their tragedies and trust in love. So don’t hold back, feel all your emotions with these books and follow your heart straight through this lovely list!

Are you looking for more books similar to Punk 57? Have any recommendations that didn’t make the list? Let us know in the comments! 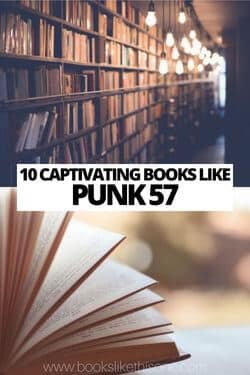