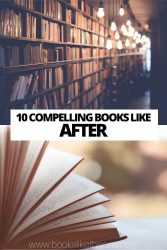 Books like After take you back in time to your first love and remind you how intense it all felt. The After series revolves around the story of Tessa and Hardin’s complicated relationship, following their ups and downs over the years.

The books take us on an emotional journey, where the reader goes back and forth between rooting for the couple and hoping they finally find happiness elsewhere. No matter whether they are together or fight with all their might to stay away, there is never a dull moment between them.

If you loved the series and are looking for similar books, then you will love this list of 10 novels like After.

If you met a perfect man who was interested in you but couldn’t offer you his heart, would you sign a contract to be strictly his lover?

Anastasia has to make this decision for herself after interviewing the very powerful and attractive Christian Grey. Little does she know her life will never be the same.

Aside from the obvious erotica aspect of Fifty Shades of Grey, the trilogy has a similar complicated love story to books like the After series.

Both Christian and Hardin have to battle their past and inner selves to try to become better people for the girls they love. Anastasia and Tessa are also alike in their innocence and hope to be happy with these men.

Bared to You, by Sylvia Day

Similar to books like After, Bared to You tells the story of Ava and Gideon as they try and fail to stay away from each other. The Crossfire series shows the two characters’ perspectives as their relationship intensifies from one day to the next.

While you can’t help but swoon for Gideon and root for his and Ava’s relationship, their obsession and dysfunction are still concerning. They both have past trauma and issues they tried to keep locked up but should definitely deal with so they can be better for each other and for themselves.

As the reader, you may wonder whether their potential happy ending is worth all the drama and work to stay together or if they are better off walking away from each other.

The Mistake, by Elle Kennedy

The two couldn’t be more different from the other. While Grace takes school seriously and hasn’t really dated or gotten intimate with anyone, Logan is the ultimate player. When their paths cross, the attraction between them is instant.

After some mistakes on Logan’s side, Grace has decided to stay away from him, but Logan will make that impossible since he is ready to win her back. But it won’t be that easy and Grace will make him work for it. Will Logan be up for this challenge?

In It Ends With Us, Lily grew up seeing her abusive father mistreat her mother one second, then begging her for forgiveness and expressing his love for her the next. She knew that wasn’t love and swore to herself that she would never be in a similar position.

So after her father’s death, Lily moves to Boston, where her first love said he wanted to live. They hadn’t seen each other since her dad beat him up, but she secretly hopes to run into him one day.

Soon after her move, she meets and connects with Ryle, who doesn’t have time for a serious relationship but breaks his own rule for Lily. They appear perfect for each other and start to build a life together, but things aren’t always what they seem.

Then one day Lily sees the boy who stole her heart in high school and her life may change in ways she hadn’t planned for.

In Beautiful Disaster, Abby is hoping to start fresh in college. She goes away from her home and the dark past surrounding it.

As she works on kicking her new good girl image, it becomes a serious challenge when she meets the university’s number #1 player Travis. Abby believes she can keep their relationship strictly platonic but that might be even harder when she is forced to move in with him.

The quickness in the progression of their relationship is similar to books like the After series. Both Abby and Tessa think they can tame the bad boys, but when is it enough and time to put themselves first?

From the Beautiful series, Beautiful Player is about a bookworm, Hanna, who is so focused on her studies and professional life that she doesn’t have time to actually live outside the lab. That is until she reconnects with her brother’s best friend and beautiful player Will.

At first, Hanna and Will start developing a lovely friendship, where they meet for morning runs and talk about life and science. That is until Hanna asks Will for dating advice and they begin their bedroom lessons.

Even though Hanna is innocent and inexperienced, like Tessa from After, she rocks Will’s world, and he can’t get her out of his head – Hanna feels the same way about him.

As the lines blur, Hanna and Will have to determine where they want their relationship to go and not to mention, what Hanna’s brother will think of it.

A Lie for a Lie, by Helena Hunting

As his NHL team’s captain, RJ feels the pressure to take care of his team and deal with everything else that comes with the sport. So when he meets sweet Lainey and she has no idea who he is, he can feel normal and be himself around her.

On their flight to Kodiac Island, Lainey and RJ quickly connect and even end up staying together for the whole month in RJ’s family cabin. Their obvious chemistry leads to more than just hanging out playing board games, which also end with other surprises.

Similar to the After series, in A Lie for a Lie, RJ and Lainey can escape their real lives when they’re together, the problems start when the outside world gets thrown into the mix. With all the obstacles they have to work through, will they be able to get what they found in Alaska?

Imagine being in love with your brother’s best friend ever since you can remember. Then imagine him moving in with you and your brother years later when you’re of legal age.

In Crush, Farrah can’t help her huge heart eyes whenever Jace is near and it only gets worse when they start sleeping together. Of course, there’s a lot of sneaking around because Farrah’s brother Nathan can’t find out.

Jace doesn’t do serious, but he also has never felt this way for a girl before. But they can’t steak around undetected forever. When they plan on telling Nathan, it doesn’t go as planned and can potentially ruin what they are slowly building together.

After a broken engagement with a cheating fiancé, Charlotte feels like she hit rock bottom. When she is trying to sell her unworn wedding dress, she discovers the most beautiful dress with a romantic note inside it.

The note fills her with hope and she wishes it had been written to her. She needs to know more about this guy Reed but is instantly disappointed when she meets him and he is nothing like the person who wrote the note.

By some coincidence, Reed’s grandmother hires Charlotte as her assistant at the family company which means Reed will have to deal with seeing her daily. Instead of love notes, Charlotte receives bossy little Hate Notes from Reed.

While the two don’t see eye to eye, the attraction between them is undeniable and as they spend more time together their annoyance lessens and the sparks increase. They have to decide if they can both overcome their failed relationships to give love a second chance.

As many would probably know, Twilight revolves around the love story between a human and a vampire. Bella and Edward, similar to Tessa and Hardin from After, don’t seem to have much in common but despite that, they seem to be made for each other.

Even though Edward is a vampire, he and Hardin share some similar character traits, with their mysterious appeal and even their dark clothing.

In both books, the girls don’t seem to have a choice in what their hearts want and although they may get hurt, the possible reward is much greater if they continue to follow it.

The After series is packed with heartache and dysfunction along with hope and love. Books like After will display the wonders and distress of first love but you can rest assured that you will get a satisfying ending. Now that you’ve read the series, continue with these recommended books and find out what comes After.

Are you looking for more books like After? Have any recommendations that didn’t make the list? Let us know in the comments! 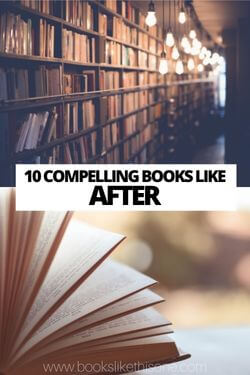