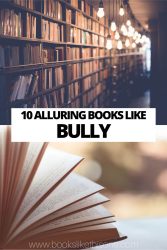 With books like Bully, you might be rooting for the happy ending while also hoping the “bad guys” get what they deserve and in the end it might just be love that saves them all.

When Jared suddenly ends his friendship with Tate, and not only stops speaking to her but starts bullying her, Tate is left hurt and confused.

She even studies a year abroad to get away from him, but when she returns her senior year, she’s ready to fight back and break down his walls.

Both written by the same author, Punk 57 and Bully share a similar theme of pain from loss and we see the unhealthy ways the characters choose to cope with it.

In this book, we follow the start of an innocent and sweet friendship between Ryen and Misha, who became penpals in fifth grade, and how it develops into something more as they get older.

Although they haven’t officially met in person, they can still trust and depend on one another. That is until a tragic accident forces Misha to abandon Ryen, leaving her more alone than ever. This also leads to her being an easy target to the new punk kid in school and his bullying.

With still no communication from Misha, Ryen has to find a new outlet to release her emotions and in the process she could possibly find a new companion to be herself with. But can she really let go of Misha?

The more she tries to fight it, the more Ava falls for her brother’s best friend Alex which complicates their Twisted Love.

When her brother goes away to volunteer in South America, he asks Alex to watch over Ava to ensure her safety. And what better way to keep an eye on her than to move in next door.

What starts off as a forced friendship, heats up when the two stop ignoring the sparks between them. But like books similar to Bully, both Alex and Ava have traumatic pasts that can get in the middle of what could be something special.

Most people can probably remember their first love and how it’s hard to compare anything else to it because you may have been a different person at that time than you are as an adult.

Similar to books like Bully, Punk Love is about first love that starts at a young age when feelings can be all-consuming, often leading to regrets and hurtful endings.

When Lara meets Alex, she just started being in the punk scene and trying vegetarianism, but to impress him she plays hard to get and pretends to be a vegan like him. And it does work.

The two start dating and slowly fall in love with each other. Although Alex has told Lara he will be moving away for college in two years, Lara still believes she can make him stay or at least make the distance work.

In all their ups and downs, can they avoid heartbreak or will they learn the hard truths about love?

Almost everyone sees her as a shark, the way she gets rid of anything in her way to get her commission and be at the top, but there’s more behind Nora’s ambition.

Taking care of her sister at a young age forced her to forget about her dreams and choose a job that could support them, leading her to become a literary agent. Even when they get older and her sister Libby has her own family, Nora still wants to be able to help them out.

However, she has put her job before her own life, never taking vacations or having serious relationships, so her sister begs her to take a trip to the literary destinations of Nora’s client’s recent best-seller book in Sunshine Falls, North Carolina.

There she shockingly runs into her rival Charlie, who she has to work with and who grew up in the town. Of course, the two bump heads at every corner but slowly realise they have more in common than they thought possible.

While Libby has her secrets and is trying to find a book-worthy romance for Nora, Nora and Charlie might decide to be the heroine and hero to their own Book Lovers story.

Sometimes you can’t stop your heart from falling in love with someone who might not be good for you. In After, Tessa learns this the hard way when she falls for the dark and damaged Hardin who seems to only make her cry.

Similar to books like Bully, Hardin is rude and sometimes even cruel to Tessa, especially in front of his friends. But somehow, it doesn’t push Tessa away it only makes her want to learn why he is the way he is and she still tries to save him.

The more she tries to bring out the good in him, the more she loses herself in the process. But is it worth the loss even if he doesn’t change for the better? And if she walks away, can Tessa’s life go back to how it was before she met Hardin or is she changed forever?

Onto the final stretch of her MBA and internship, everything seems to be going as planned for Chloe until her boss, who she hadn’t met yet, returns to Chicago from France.

From the start, Bennett is rude and doesn’t seem to value Chloe’s work or even take her serious, but in the background, there is some undeniable sexual tension between them.

Then on a late night working together, the two finally give into their attraction while still trying to be the winner of every situation.

As they continue to pretend to hate each other, it soon becomes clear that Chloe wants something more with her Beautiful Bastard. But does Chloe have more to lose than Bennett if their “relationship” comes out and is it worth it?

This Man, by Jodi Ellen Malpas

Before Ava meets Jesse, to be the interior designer for his manor, she expects him to be old and out of shape. So she’s not only left speechless when she sees she was wrong but also because he’s extremely handsome and cocky.

Right away, Jesse is blunt and honest about his attraction to Ava. While she is trying to keep things strictly professional, he won’t take “no” for an answer and if she tries running, he’ll somehow find her. But after fighting it long enough, she decides to give in to This Man.

Similar to characters from books like Bully, Ava will soon discovers Jesse’s tragic past and how it has lead him to the issues he faces daily.

When it all becomes too much, will she have the strength to run away for good to save her heart or is it too late for that?

A Favor for a Favor, by Helena Hunting

When Stevie finds her boyfriend, who she just moved in with, cheating on her birthday, she is grateful for once to have an NHL player as her brother who lets her stay in the penthouse he doesn’t use.

While she is crying and not able to open the door, her rude soon-to-be neighbour comes out to yell at her about being too loud. Stevie can’t help but notice how attractive he is but it doesn’t lessen the hurt from his insults.

As time goes by, the two start an underwear competition when they pick up their newspapers, which gives Stevie something to look forward to.

Then when Bishop, who plays on the same team as Stevie’s brother, gets injured, it’s the perfect opportunity for Stevie to get a professional athlete as a reference to help her as a physiotherapist.

The more time the two spend together with minimal clothing the more the lines blur, but can Bishop and Stevie keep it professional or will they be asking for more than A Favor for a Favor?

Elle is not only guilted into travelling to Bali for her best friend’s wedding and having to participate in the week-long activities, but she has to stay in the room next to her old crush who she now hates.

While she plans to stay far away from Jackson, he offers her an olive branch to call a truce for the week. If he can show her he’s changed then she has to give him a chance and if he doesn’t succeed then he won’t bother her again.

Similar to books like Bully, the two were friendly when they first met, then turned into enemies and now they have a chance to change that.

Elle is pleasantly surprised by how well she gets along with Jackson and when she gives him a chance he can even be the perfect submissive to her. But by the end of their truce, will she be open to love and to continue their arrangement in Something Borrowed?

Since their first day of high school, Rowan and Neil have been competing against each other in every shared class, student council, valedictorian and even the universities they get into.

When Neil wins their most important competition to become valedictorian, Rowan will do everything she can to win the senior scavenger hunt, Howl, and get the money reward.

The two will soon realise that everyone else is tired of them being at the top of everything. So while the other students team up against them, Rowan and Neil will have to work together.

Along the way as they get closer to the end of the game, a little more than a friendship will start to blossom. Although Rowan still has her reservations, she might start to picture a future where she and Neil continue to stay on the same team in Today Tonight Tomorrow.

People say there’s a thin line between love and hate, so it shouldn’t be a surprise when people who hate each other end up dancing across the line to love. If you love enemies-to-lovers romance then books similar to Bully will be your perfect cup of tea.

Are you looking for books like Bully? Have any recommendations that didn’t make the list? Let us know in the comments! 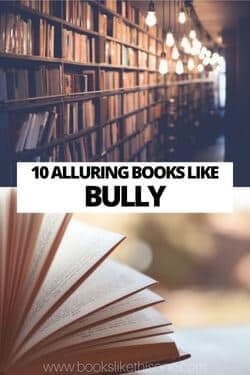