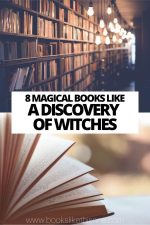 Are you searching for more books like A Discovery of Witches?

Vampires, demons (or daemons if you prefer alternative spelling) and witches have enthralled fiction readers for a long time. Magic and the supernatural continue to pull people into a reading trance and A Discovery of Witches is no different.

Pitched somewhere between Interview with a Vampire and the Twilight series, Deborah Harkness’s debut is littered with history, romance and magic.

The character of Diana as the principal protagonist is engaging enough to keep you reading, and when you throw in hordes of supernatural beings trying to secure a treasure it’s easy to see why this has flown off the shelves.

If you’ve already read A Discovery of Witches and are looking for similar books, we have a few recommendations that might sate your thirst.

You can’t talk about books like A Discovery of Witches without mentioning Dead Until Dark. Sookie Stackhouse is widely known via the True Blood TV show adapted from the novels, but the books are where it all began.

Sookie lives in the small town of Bon Temps in Louisiana. Vampires revealed themselves to humanity a while ago (along with some other supernatural beings) and have been living in the open for some time. Racial prejudices and more are a problem, but Sookie doesn’t really pay much attention to any of that.

And then she meets Bill Compton, a dark brooding vampire man who Sookie can’t help but be attracted to. Is dating a vampire a good idea?

Dead Until Dark wears its heart on its sleeve and there is a lot to enjoy here for fans of A Discovery of Witches.

The Eyre Affair, by Jasper Fforde

In The Eyre Affair, it’s 1985. Time travel and cloning are commonplace and literature is taken very very seriously. Thursday Next is a literary detective, part of SpecOps’ renowned literary crime department and it’s her job to track down the world’s third most wanted man, Acheron Hades.

Hades has stolen the original manuscript of Martin Chuzzlewit, killing a minor character within, but his real target is Jane Eyre and it’s up to Thursday to stop him. Despite the humorous absurdity of Thursday’s world, the story is brilliant and the characters are superb. Well worth a read.

The Golem and the Jinni, by Helene Wecker

I first read this back in 2013, shortly after it was published and if you enjoy books like A Discovery of Witches, you will be enchanted with this magical tale.

Chava is a golem, fashioned from clay and brought to life by a disgraced rabbi who mucks about with dark Kabbalistic magic. Chava was created to be the wife of a man who dies during their voyage from Poland to New York City in 1899. Ahmad is a jinni, a creature of fire born in the Syrian desert who’s been trapped in an old flask for a long time before being set free in New York City.

Separate, Chava and Ahmad are lost and alone in a strange place, but perhaps together they can find a new life. I cannot recommend The Golem and the Jinni enough to readers. Both melodic and wistful, sad and magical, this is a story that anyone who enjoys the supernatural should read.

Wicked: The Life and Times of the Wicked Witch of the West, by Gregory Maguire

Wicked is better known as the globally successful stage musical, itself a brilliant creation, but not many theatre goers realise it is based on the 1995 novel by Gregory Maguire.

Wicked introduces us to Elphaba, born to Melena Thropp, granddaughter of the Eminent Thropp of Munchkinland.

Elphaba is no ordinary girl though, she is green-skinned, has sharp teeth and appears savage. Terrified of water, which causes her severe pain, Elphaba is ostracised by many, but there is far more to this young woman than even she realises.

Books like A Discovery of Witches often use fantasy to reflect and study politics and social issues. Wicked is both a satire and a study in prejudice. Rape, sexism, racism and more are all sensitively explored through the lens of Oz.

Elphaba herself is one of my favourite literary characters of all time. Intelligent and caring, strong and magical, vulnerable and relatable, she embodies qualities everyone can understand. You want Elphaba to win. You want her to succeed and you quickly realise that true villains do not wear pointy hats or ride on a broomstick.

There are books like A Discovery of Witches that focus in on the everyday things that we all care about. Life, love and tragedy are well explored in Alice Hoffman’s huge success, Practical Magic.

Raised by their eccentric aunts in a small town in Massachusetts, Sally and Gillian Owens are shunned by their classmates and many of the townsfolk for being witches. They both struggle to get away from the accusations that everything that goes wrong in town is their family’s fault.

Following the death of her husband, Sally leaves everything behind to try and raise her daughters away from all the rumours and whispers. Then Gillian turns up on her doorstep, and the magic Sally thought she could escape, seems determined to pull her back.

Practical Magic is an interesting read and very different from the film adaptation of 1998, but it is worth a look if you’re a fan of magic and witches.

The Magicians, by Lev Grossman

Veering closer to a coming-of-age tale then many books on this list, The Magicians is a thrilling and engaging story of people practising magic in the real world.

Quentin Coldwater (great surname!) is an intelligent but depressed senior in high school. He’s still preoccupied with fantasy novels he loved as a child and wishes magic were real. Cue a not very surprising reveal that magic is real when Quentin is admitted to a secret and highly exclusive magic college in swanky upstate New York.

Quentin does all the usual college/university things (drinking, partying, sex, making new friends etc.), but he still feels low… until discovering that the fantasy world he read about as a child is real and a lot darker than it came across in the stories.

Books like A Discovery of Witches can appear to be one thing at the start, before becoming another as you delve deep into the story. The Magicians fools you into thinking it’s just another generic magical boarding school-type fantasy before turning into something utterly brilliant.

There are books like A Discovery of Witches that feature a main character trying to conceal a growing power that they themselves don’t know enough about. In Beautiful Creatures, Lena Duchannes is a young girl struggling to understand and hide a curse that has affected her family for generations.

She can’t hide forever though and Ethan Wate, a boy who’s been looking forward to escaping the small town of Gatlin, finds himself drawn to Lena.

Like many books, Beautiful Creatures has received a mixed response from readers, with some praising its romance and magic whilst others detest those same elements.

Like most books, I would always recommend a reader should decide for themselves. If you like A Discovery of Witches, you may very well enjoy Beautiful Creatures.

What if you could live again and again until you got things right? That premise alone had me picking up Life After Life out of curiosity. Books like A Discovery of Witches often deal with the questions of life after death and if there is such a thing as immortality.

Life After Life puts another new spin on this theme by introducing us to Ursula Todd, a baby born in 1910 who dies before she can even draw a breath. But on that same night, Ursula Todd is born and doesn’t die.

Ursula is locked into a strange and terrifying pattern where she grows and dies repeatedly in different ways and all as the 20th century marches on towards a second world war. Does Ursula have an infinite number of lives, or is something else going on?

Shades of The First Fifteen Lives of Harry August, as well as The Time Traveller’s Wife, permeate the pages of this fascinating novel.

A Discovery of Witches eases people into the supernatural realms using history and romance to whet a reader’s appetite. Vampires, witches, demons and magic dance across the pages, sweeping readers along in their wake. If you’ve enjoyed Deborah Harkness’s magical series, then at least one of the books in our list should provide equal delight.

Are you looking for more books like A Discovery of Witches? Have any recommendations that didn’t make the list? Let us know in the comments! 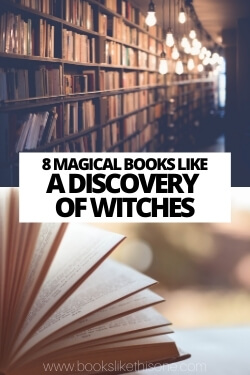