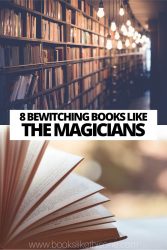 The brilliant but miserable Quentin Coldwater reminds us of just how challenging and upsetting being a teenager can be. Like Quentin, I also used to escape reality by diving into a fantasy novel (reader’s note: I still do). Unlike Quentin, I have never unexpectedly discovered that the fantasy world I read about was actually real.

The Magicians appears like just another coming-of-age contemporary fantasy tale. Yet, once you delve inside, you might find yourself hooked. If you’ve already absorbed The Magicians and are looking for other books like it, what can be found on the shelves?

Books like The Magicians often claim to be the first of their kind. Then along comes Diana Wynne Jones from beyond the grave to remind readers that she got there long before today’s wordsmiths.

Deep Secret is a companion novel to The Merlin Conspiracy. You can read both in any order, and will be instantly delighted in how well Wynne-Jones blends contemporary life with the world of magic. Rupert Venables is a Magid. His job is to oversee what goes in the multiverse and Earth is one of the territories under Rupert’s watch.

But then Rupert’s mentor dies and he needs to find a replacement quick. The easiest solution is to round all the candidates up during a fantasy and science fiction convention in a town that sits on a node of power. What could possibly go wrong?

Humour and magic combine to gift readers a tale that will have you laughing and wondering if you might find your own bit of magic at a #SFF convention.

Are you a fan of Diana Wynne Jones? Check out our list of more books like Howl’s Moving Castle!

The Left Handed Booksellers of London, by Garth Nix

There are many books similiar toThe Magicians that are set in alternate versions of our own world. In The Left Handed Booksellers of London, Susan Arkshaw has come looking for her father in a slightly altered version of the London we know today.

Susan thinks Frank, a local crime boss might be able to help, but when Frank is turned to dust by the ridiculously attractive Merlin, Susan begins to learn that there is more going on than she realises. Merlin is a junior left-handed bookseller, who along with the right-handed booksellers, police the Old World whenever it intrudes on modern living.

Filled with nasty fairies, evil elves and a disgustingly cruel bad guy, The Left Handed Booksellers of London is the perfect choice if you enjoyed The Magicians.

The Invisible Library, by Genevieve Cogman

Some books like The Magicians, play with so many different ideas that you feel the end result might be a mess. Not so in The Invisible Library.

Irene is a librarian for the Library. The Library is the ultimate library, responsible for harvesting fiction from multiple realities to ensure no book is ever lost forever.

Following a job that could have gone better, Irene is posted as librarian to an alternate version of London (the steampunk Victorian kind) along with her new assistant Kai, who isn’t telling her everything about himself.

Together they have to retrieve a dangerous book that dozens of factions are willing to die to get their hands on. The Invisible Library is quirky and clever. Cogman delights in playing with your expectations before cheerfully pulling the rug out from beneath your feet.

The Quorum, by Kim Newman

Probably best known for his Anno Dracula series (which you should also check out!), Kim Newman had also delivered a number of contemporary fantasies over the years. The Quorum is mainly set in 1994 and follows the lives of four young men as three of them make a Faustian deal with Derek Leech in 1978.

Leech promises them wealth, glamour, and success, but at a cost. Books similiar to The Magicians like to lure the reader into the story with a hint of magic before hitting you head on with the full ramifications of what’s going on. The Quorum is both a satire on the 70s through to the 90s.

As Mark, Mickey and Michael all enjoy huge success and power, it all comes at the expense of their old friend, Neil, whose life becomes a bleak nightmare from which he can never understand or escape from. But Neil’s bad luck might yet come to an end as Sally Rhodes, private investigator enters the scene. Well worth a read, especially if you lived through the 80s and 90s.

Magic rivalries are common in books like The Magicians. The Night Circus is centred around the rivalry between two magicians, Celia and Marco. Both have been manipulated into trying to best the other by their instructors (think of two old white privileged men and you’ll get the idea) all behind the scenes at the magical Night Circus.

There’s just one problem that neither instructor counted on; Celia and Marco falling in love.

Many have claimed The Night Circus is written much in the vein of an epic poem. I disagree. The novel is told with a flowing prose that evokes rhythm, but never at the expense of the story. Celia and Marco are both interesting characters and their instructors are equally beguiling even whilst their intentions are vile.

If you enjoyed the sense of tragedy The Magicians evokes, you’ll enjoy The Night Circus.

There are some books like The Magicians that dabble in darkness, and then there is London’s Falling. Paul Cornell terrified millions over Christmas 2012 when London’s Falling first hit bookshelves.

Set in the city of modern-day London, Detective James Quill is ready to complete the drugs bust of his career until his chief suspect, Rob Toshack, is brutally murdered in custody. Desperate to get to the bottom of the impossible murder, Quill enlists the help of analyst Lisa Ross and undercover cops Costain and Sefton.

Very quickly the odd quartet discover an occult link to magic both powerful and dangerous. For Rob Toshack had struck a deal that kept him one step ahead of the law. A deal with a deadly supernatural force who can bend space and time amongst other things. And now it’s after Quill and his team.

Do not be fooled by the oblique references in my summation. London’s Falling is unafraid to take you to the very depths of the human soul and have you questioning if magic would be as exciting as some books would have us believe.

Magic, humour and mayhem often collide in books like The Magicians. Never is that truer than in Oddjobs.

Set in contemporary Birmingham, England, Morag Murray has just started working for a secret government department responsible for ensuring that the apocalypse happens as quietly as possible. Supernatural murders and amphibian gangsters are part of the daily routine for Morag and her colleagues.

But Morag has something else to worry about too; her inevitable death.

With an otherworldly God after her for killing one of the God’s clan (in self-defence to be fair), Morag must find a way to stop the God whilst keeping the apocalypse conveyer belt running smoothly. Easier said than done.

Oddjobs is a cheerful take on the end of the world trope, combining Lovecraftian absurdity with everyday horrors.

Thief of Time, by Terry Pratchett

So many readers have avoided Terry Pratchett’s books for being too absurd and unrealistic. Those same readers often miss the satire of contemporary life that is rife throughout every Discworld novel. Thief of Time is a good example of how silly the end of the world trope often is in fantasy.

On Discworld, it is the job of the Monks of History to store time and pump it into places where it’s needed. Unfortunately, that is all about to end with the construction of the world’s first truly accurate clock.

Lu Tze and his apprentice Lobsang Ludd only have a short amount of… well… time, to prevent the apocalypse. If you follow the Discworld books, then you will know this one is a story centred around Susan, Death’s granddaughter.

Susan is one of the best characters in literature, with her no-nonsense attitude and world-weary obeisance to take over from death when needed. Books similiar to The Magicians work hard to blend humour with magic, but few have done it as well as Pratchett managed.

The Magicians is a great book to lure suspicious readers into the world of fantasy. Along with its recent TV adaptation, The Magicians is one of many stories people are using to escape the bleak realities of the contemporary world.

Are you looking for more books like The Magicians? Have any recommendations that didn’t make the list? Let us know in the comments! 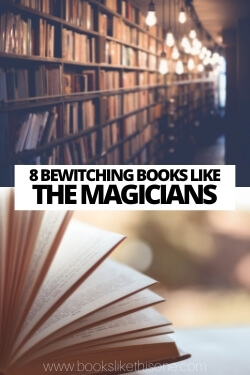