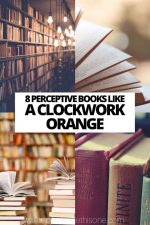 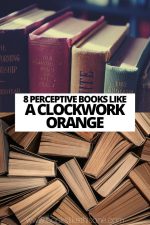 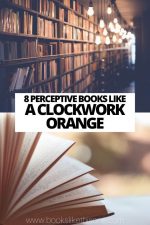 At times, books like A Clockwork Orange get lost in a cloud of their own notoriety because the world’s envisioned and the actions of characters are too painful, too shocking, too plausible to comprehend. But if you dare read on, you will discover authors of sublime skill and incomparable vision for though it may be portrayed via unsettling means, the subversive undertones of these novels are incredibly perceptive (topical even) despite being written decades ago.

Anthony Burgess’ 1962 classic A Clockwork Orange tackles oppressive governments, the importance of free will and the dualities of our reality like good versus evil, man versus government, neutrality versus commitment to name a few. Set in the not so distant future, Alex the novel’s teenage protagonist describes his barbaric and violent exploits before being imprisoned and used as a guinea-pig by a government intent on reform.

Though not always for the fainthearted or those who enjoy fiction that is a bit easier to digest, the novels featured on list cater for every kind of reader of books like A Clockwork Orange with appearances from authors renowned in the dystopian genre such as Margaret Atwood, George Orwell and another from Burgess himself, Enjoy!

Margaret Atwood has become somewhat the Queen of dystopian fiction with an unparalleled imagination that has won her the Booker Prize twice among many other prestigious accolades. When asked where she got the inspiration for her 1985 classic The Handmaid’s Tale, Atwood explains that the basis of the novel is nothing that hasn’t already happened to women throughout history using the Salem witch trials as an example.

As in a lot of books like A Clockwork Orange, events in The Handmaid’s Tale occur in the future but a future that can easily be realised. A Future where people are struggling to conceive and a breakaway authority takes matters into their own hands to save the human race; enter the creation of Gilead, a new totalitarian state.

In Gilead, anyone with working ovaries is forced to become a handmaid, a slave to the Commanders and their wives in a bid to bare them a child. Narrated by Offred she shares the plight of the handmaids as they struggle to survive this terrifying new life while holding onto the memories of their happy lives before.

Hauntingly plausible which gives the reader a sense of foreboding, a truly compelling read.

Have you already read this haunting novel? Check out our list of books like The Handmaid’s Tale.

The next novel like A Clockwork Orange has been labelled an allegory, a political treatise, a morality tale even a vision of the apocalypse, but to me, William Golding’s outstanding novel Lord of the Flies is a poignant reminder of the inevitable end of innocence and just how dark the human soul can become.

Anonymously narrated, we see what happens to a group of schoolboys when they become stranded on a deserted island following a tragic plane crash. Being the first time they are without adult supervision, initially their freedom is embraced and celebrated for the boys can do anything they want to do, quite literally anything.

But as they attempt to forge their own society, this celebrated freedom soon descends into chaos; a violent, savage reign of terror with barbaric behaviour unimaginable for children so young as the hope of being rescued starts becoming as distant and forgotten as their innocence.

As the children end up living in a nightmarish society, despite it being of their own making, Lord of the Flies is a prime example of dystopian fiction one that fans of A Clockwork Orange are sure to enjoy.

Have you read this classic novel? Check out our list of books like Lord of the Flies.

Published in 1949, George Orwell’s infamous Nineteen Eighty-Four becomes increasingly affecting and hauntingly real as each year goes by and that’s what makes it a brilliant read for anyone scouring shelves for books similar to A Clockwork Orange.

It is where the famous term “Big Brother” comes from because, in Oceania where the novel takes place, Big Brother is always watching, policing thoughts, quashing individuality and opposing any concept which rivals the totalitarian bureaucratic world they have created.

The main character Winston Smith is employed at the Ministry of Truth where he rewrites historical events to conform to society’s version of events, in other words, manipulate the truth. He secretly loathes his job, ‘The Party’ in charge and the world he lives in, but not many are willing to share his affinity for rebellion and need for individuality that is until he meets Julia.

Together they begin a love affair, an act of rebellion in itself one that could result in torture to reform or death. Nineteen Eighty-Four is one of the most terrifying books of the 20th Century, the futuristic purgatory described and Orwell’s precision depicting modern life in such a realised version of hell is astounding.

We, by Yevgeny Zamyatin

Said to be the spark of inspiration for other dystopian classics like the aforementioned Nineteen Eighty-Four and other prestigious authors like Ayn Rand and Aldous Huxley, you expect a lot from Yevgeny Zamyatin’s We even before you read the first page – and luckily, it doesn’t disappoint.

The citizens of One State live lives devoid of passion and creativity, where everyone is numbered and dreams are a symptom of mental illness as their totalitarian strictly surveilled glass-enclosed city is run on logic.

D-503 is a mathematician and spacecraft engineer happily working on a spaceship set to invade other planets until one day he meets I-330 who fascinates him by flouting the rules. Soon D-503 makes an astounding discovery that will change the way he looks at life forever; he has an individual soul.

We is a powerfully inventive piece of dystopian fiction which ended up foreshadowing the very worst of Soviet Russia, a fitting addition to this list of perceptive novels like A Clockwork Orange.

If you find some of the other titles on this list of books like A Clockwork Orange a bit hard to handle at times then Cloud Atlas could be the perfect next read for you.

Though technically not an easy read as with many Booker Prize nominees, it will ease you into the dystopian genre with only 2 of the 6 linked and embedded narratives portraying a particularly unsettling world; a post-apocalyptic Hawaii and Nea So Copros, a dystopian futuristic state in Korea.

While the 4 other narratives are set across different time periods, though not always depicting life as we know it, are slightly easier to digest. David Mitchell’s novel invites us to look at humanity as cyclical and delves into ideas of reincarnation and the universality of human nature.

Each narrative centres around a different character, though set in a different place and time the characters all have a comet-shaped birthmark as if incarnations of the same soul which spurs you to read on to discover how everything is connected.

A rollercoaster of a plot with inquisitive understanding and observation, ending on cliffhangers before delving into the next narrative, Cloud Atlas is a truly gripping read.

The Wanting Seed, by Anthony Burgess

Burgess is back to shock us with another terrifying novel, said to be 25 years in the thinking The Wanting Seed is another fascinating take on reproduction in an over populated world with governmental powers intent on control.

The novel centres around Tristram Foxe, his wife Beatrice-Joanna and his brother Derek, in their overpopulated world food is short and self-sterilisation and homosexuality is encouraged and policed by the ‘grey boys’ the largely homosexual police force.

Derek pretends to be homosexual in public which helps further his career but behind close doors carries on an affair with Beatrice-Joanna which results in her pregnancy. The grey boys assume Tristram is the father and arrest him where he finds himself forced into an unjust war whose sole purpose is to thin out the population.

Both fiercely funny at times while grimly serious at others, Burgess manages to attack societal issues, religion, government, history and condemns war in this easily realised novel so if you enjoy similar aspects of A Clockwork Orange you are sure to be gripped by The Wanting Seed too.

Ok so zombies aren’t necessarily as easy to conceive as totalitarian governments, violent rebellion and patriarchal breakaway societies, however, Max Brooks was certainly on to something else in his novel World War Z using zombies as a vehicle to portray some particularly subversive messages (especially poignant given our recent pandemic).

A particularly intelligent take on your regular zombie apocalypse as the novel is composed of written accounts from all over the world describing how the apocalypse, and the zombies, affected them. The real focus is on how different cultures and countries dealt with it, with some countries bombing each other while others unite in aid and support in a bid to survive.

Though zombies themselves may not seem especially visionary, Brooks’ look at the aftermath of the apocalypse in World War Z is particularly perceptive and something fans of books similar to A Clockwork Orange will find incredibly interesting.

We already know Margaret Atwood has a unique ability to propel readers into the future to a world that is still all too familiar while being beyond the realms of the regular imagination.

She describes her 2003 novel Oryx and Crake as not pure science fiction but more speculative fiction because it doesn’t deal with anything that we cannot yet do or begin to do – this to me is terrifying to comprehend in itself.

Then we enter the world of Crakers, Pigoons and Wolvogs genetic experimentation and pharmaceutical engineering which has created a world not as we know it. The protagonist Snowman, formerly known as Jimmy, is assumed one of the last humans left on earth living amongst the superhumans engineered to survive the inhospitable landscape that the world’s become.

Through a narrative alternating between the past and present, it’s slowly revealed what has taken place, who the mysterious Oryx and Crake are, Jimmy’s part in everything and why he now goes by Snowman and lives in a tree with a bedsheet tied around him.

A hauntingly fascinating read, Oryx and Crake is the perfect way to finish this list of perceptive books like A Clockwork Orange.

As you have seen, dystopian as a genre comes in may forms speculative, horror, sci-fi…I have tried to include a range to demonstrate that books like A Clockwork Orange aren’t just an excuse for blood and gore, barbarity and violence they are pieces of visionary literature which become all the more relevant each time you read them.

Are you looking for more books like A Clockwork Orange? Have any recommendations that didn’t make the list? Let us know in the comments! 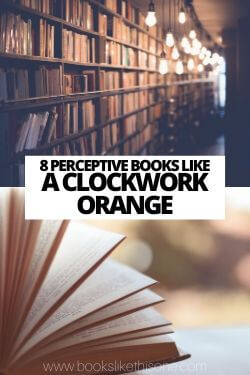