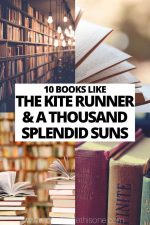 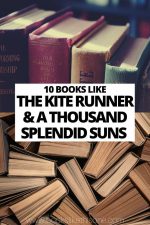 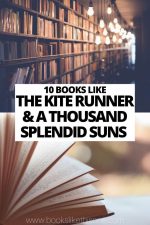 Some books that you read undoubtedly leave you yearning for more. Khaled Hosseini’s two most popular novels – The Kite Runner and A Thousand Splendid Suns – had that effect on me. In fact, I clearly remember after finishing A Thousand Splendid Suns the need to wait a few days before tackling another book to allow me to fully process and appreciate what I had just read.

However, after a few days, I was left searching for more books like Kite Runner and A Thousand Splendid Suns.

Luckily, there are a plethora of books that have been written that share some similarities with Khaled Hosseini’s epic novels. Some of these recommendations delve further into Afghan culture while others share similar themes or writing styles.

10 Books Similar to Kite Runner and A Thousand Splendid Suns

And The Mountains Echoed, by Khaled Hosseini

What makes And the Mountains Echoed different from his other two novels, is that the book is a collection of short stories that are told from different perspectives and tied together by various characters in each story.

Like his other two novels, And the Mountains Echoed delves deep into the Afghan culture and people’s individual stories rather than focusing as much on historical events as Kite Runner and A Thousand Splendid Sons did.

The Pearl That Broke Its Shell, by Nadia Hashimi

Nadia Hashimi’s The Pearl That Broke Its Shell is a novel that delves deep into women’s lives in Afghanistan across a time span of two centuries and is particularly worth a read if you’re looking for more books similar to A Thousand Splendid Suns.

The novel tells two stories in parallel of Rashima – a girl living in Kabul in the 21st century – and her great-great-grandmother who lived in similar circumstances over a century earlier.

Similar to And The Mountains Echoed, it focuses more on the individual stories of the characters living in Afghanistan rather than on the historical events surrounding their lives.

Nadia Hashimi’s debut novel is a very powerful read and a great book for people who want to understand more about the difficulties of being a woman in Afghanistan.

The Handmaid’s Tale by Margaret Atwood, which was originally written in 1985 and has recently been turned into a TV series, is a novel set sometime in the near future in a totalitarian society.

The premise of the novel is based in the aftermath of a staged attack to overthrow the government by a militant evangelist group in the USA.

The government put in place in the country that is now called the Republic of Gilead sets up a hierarchical society based off of fanatical Christian ideals. Women are stripped of all of their rights and are forbidden to do such things as read or hold jobs.

Set in a time where fertility rates have dropped drastically, those women who are found to be fertile are enslaved as handmaids to high ranking officials and forced to bear children for them.

The Lord of the Flies is a classic novel that is a must for readers looking for more books like Kite Runner or A Thousand Splendid Suns. The plot focuses on a group of young boys who survive a plane crash on an isolated island and are then forced to survive by themselves.

The story follows their quick descent from a democratic society into full-fledged chaos with similar themes to the other books listed here including the impact that power accumulation has on individual’s morals and how they treat their fellow humans.

William Golding’s novel has been consistently listed in several of the best books of all time compilations including in BBC’s Big Read and Time Magazine’s Best English Novels of All Time.

If you’ve already read Golding’s classic, make sure to check out our article for more books like Lord of the Flies!

One of my favourite books of all time, Shantaram is a novel by Gregory David Roberts who tied several of his real-life experiences into a fictional setting.

It follows the story of Lin, an Australian man, who escapes from jail and flees to Mumbai, India where his life becomes intertwined with the multicultural society in the Indian city.

The reason why I think that this is a great novel for readers searching for more books to read is that Gregory David Robert’s philosophical style of writing shares many similarities with Khaled Hosseini.

The novel also explores a different side of Afghan society through Lin’s dealings with the Afghan mafia later in the book.

For more book recommendations, browse our books like Shantaram article!

The Alchemist by Paulo Coelho is another novel that shares similarities with the philosophical elements of both Kite Runner and A Thousand Splendid Suns. It follows the story of a young shepherd named Santiago who travels to Egypt in search of treasure after having a dream.

The novel didn’t originally sell a lot of copies but went on to become an international bestseller and top many recommendation lists for both travel novels and inspirational reads.

For more book recommendations, browse our books like The Alchemist article!

The Boy in Striped Pajamas, by John Boyne

A New York Times Bestseller, The Boy in Striped Pajamas by John Boyne follows the story of Bruno, a young German boy in WWII who moves close to a concentration camp after his father becomes a commander there and forms a friendship with Shmuel, a Jewish boy, when walking along the fence of the concentration camp one day.

The novel explores how Bruno slowly begins to understand the horrors of what is actually occurring inside the camp and the unlikely friendship that forms between the pair.

The book is extremely well written and took a similar hold upon me that both Kite Runner and A Thousand Splendid Sons did.

The Book Thief, another novel set during WWII, was written by Australian author Markus Zusak.

This novel shares a lot of similarities with The Boy in Striped Pajamas and follows the story of Liesel, a young German girl, whose foster parents hide a Jew named Max in their basement. The story follows the relationship that exists between Liesel and Max as Liesel begins to steal books that are banned by the Nazis.

The Book Thief is narrated by Death, which once again showcases similarities with the morality and philosophical issues that are also explored in books like A Thousand Splendid Suns and Kite Runner. The Book Thief was made into an award-winning film in 2013.

If you want more book recommendations, make sure to check out books like The Book Thief article.

Memoirs of a Geisha, by Arthur Golden

Memoirs of a Geisha is a now-famous novel that tells the story of a young geisha living in Japan. The main character, Chiyo, is a young girl from a peasant family that is sold into the life of becoming a geisha. It delves into the details of the secretive life of geishas as well as providing an insight into Japanese culture around WWII.

The author, Arthur Golden, does a fantastic job of transporting you into this unique world which is something that is also a great strength of Khaled Hosseini.

This makes Memoirs of a Geisha a great option for readers looking for their next read similar to Kite Runner or A Thousand Splendid Suns.

One Hundred Years of Solitude, by Gabriel Garcia Marquez

Considered by many to be one of the best Spanish-language novels of all time, One Hundred Years of Solitude follows the story of the Buendia Family and their life in a fictional town in Colombia.

The novel passes through seven generations of the family and examines the impact that historical events have on the present day and its characters.

This is quite similar to the way that Khaled Hosseini uses Afghan history as a backdrop to the way characters in his books behave and the situation that they find themselves in. Though originally written in Spanish, this classic novel has now been translated to several different languages.

Books like Kite Runner and A Thousand Splendid Suns by Khaled Hosseini are some of my favourite books of all time and I hope these suggestions provide readers with additional novels to read if you also thoroughly enjoyed these books.

What are your favourite books to read that are similar to Kite Runner and A Thousand Splendid Suns? Let us know in the comments below! 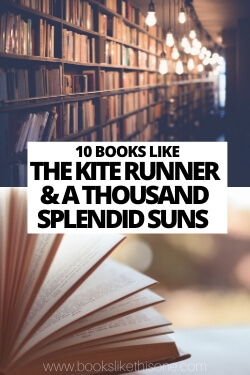