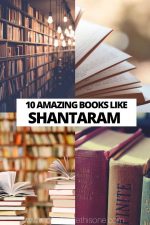 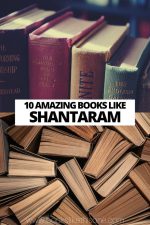 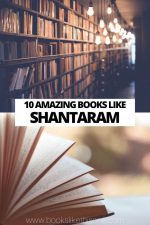 Shantaram by Gregory David Roberts is undoubtedly one of my favourite books of all time. It tells the story of Lin, an Australian who escapes from prison and flees to Bombay (present day Mumbai), India where he begins a new life. The book delves deep into Indian culture and life in Bombay as he forms relationships with people from all walks of life including those living in slums to people in the mafia. While Shantaram is a fictional story, it is based on many events that happened in the author’s life and is undoubtedly one of the most read books by travellers to India.

What makes the novel unique is Roberts’ philosophical writing style that can make finding other books like Shantaram a challenging task. Ever since I finished reading this book for the first time, I have always been on the lookout for more books like Shantaram – here are ten great reads that share similarities with this epic story.

Whenever looking for more books like a recent favourite, it’s always best to start with books published by the same author! The Mountain Shadow by Gregory David Roberts is the long-awaited sequel to Shantaram which takes off from two years after the previous book finished.

Without wanting to give away too much, The Mountain Shadow follows the life of Lin in a changing Bombay following the events of Shantaram. If you’re looking for more books like Shantaram, this is undoubtedly the best place to start as Roberts continues with his philosophical writing style and magnificent storytelling ability. While many might argue that the sequel isn’t as good as original, I found it still to be incredibly enjoyable and a must-read for fans of Shantaram.

If you’re looking for more books like Shantaram because you enjoyed Roberts’ writing style then I highly recommend A Thousand Splendid Suns by Khaled Hosseini (or any other books like it!)

The novel follows the story of two women over a span of several decades and how their lives become intertwined due to the external events happening in Afghanistan over the last 20th century. This is another one of my favourite novels and Hosseini’s philosophical style shares many similarities with what you find in Shantaram.

While Shantaram might be considered the novel of choice for backpackers in India, there is no doubt that Marching Powder by Rusty Young & Thomas McFadden enjoys a similar status amongst backpackers in South America.

This true yet unlikely story follows the life of Thomas McFadden after he gets imprisoned in a San Pedro Prison – a notorious Bolivian jail – for trafficking drugs. McFadden begins running tours of the prison as an inmate for interested backpackers which is how he eventually meets Young. They then collaborated to tell the unique story of prisoners in San Pedro and how the jail runs based on its own self-governed laws and economy.

Marching Powder shares a number of similarities with Shantaram including how it dives deep into the drug culture of both countries and the consequences of being a foreigner in trouble abroad. It is undoubtedly a fantastic next read if you’re looking for more books like Shantaram!

The Beach by Alex Garland

If you’re after more books like Shantaram, because you first read it while backpacking India, then The Beach by Alex Garland will undoubtedly be another story that you enjoy.

Considered one of the most popular backpacking books if you’re travelling in South East Asia, it follows the story of Richard who discovers a map to “The Beach”. By following the map, he eventually ends up finding a group of travellers who appear to be living in idyllic circumstances on a remote island in Thailand. Things are obviously not as simple as they seem and eventually, the community begins to unravel.

The Beach was created in a hit movie starring Leonardo DiCaprio in 2000, however, I think the book is a lot more enjoyable and a great read for travellers.

The Damage Done: Twelve Years of Hell in a Bangkok Prison by Warren Fellows

Another book that shares many similarities to both Shantaram & Marching Powder, in particular, is The Damage Done: Twelve Years of Hell in a Bangkok Prison by Warren Fellows.

This book is the autobiographical true story of how Fellows spent twelve years in a Bangkok Prison and the conditions he had to ensure after being sentenced due to drug trafficking. While Fellows was undoubtedly guilty of the crimes he committed, the terrible conditions that he had to endure while in prison make this book a fascinating read and a must if looking for more books like Shantaram.

The Alchemist by Paulo Coelho

Stepping away from stories about life in prison and instead focusing on books that have similar writing styles to Shantaram, The Alchemist by Paulo Coelho is undoubtedly a great book to read for lovers of Shantaram.

Another favourite amongst travellers, it follows the story of Santiago, a shepherd, who has a dream about finding treasure and then starts travelling in order to make the dream a reality.

The Alchemist is a great book to read if you enjoy the philosophical elements of Shantaram and reading about how people develop after travelling the world. As quite a short read (particularly when compared to Shantaram!) this is a must-read for readers who are hunting for more books like Shantaram!

If you’re already read this book, make sure to check out our article of books like The Alchemist for even more choices!

If you’re wanting to dive into more books about India after reading Shantaram, then you can’t go wrong with Midnight’s Children by Salman Rushdie.

Midnight’s Children won the Booker Prize is considered by many to be one of the best books written in the 20th century.

How to Get Filthy Rich in Rising Asia by Mohsin Hamid

How to Get Filthy Rich in Rising Asia by Mohsin Hamid is another great novel that explores the culture of South Asian countries. It follows the story of the unnamed narrator as he moves up in social classes from an impoverished upbringing to becoming successful in the corporate world.

It’s written in the second person and in a unique style that resembles a self-help book. It’s incredibly humorous and a great read if you’re looking for other books that dive into the culture of South Asia. While the country the novel is set in isn’t named, many assume it’s Pakistan given that is where the author is originally from.

A much lighter read compared to some of the other recommendations in this list, Holy Cow: An Indian Adventure by Sarah Macdonald is an autobiographical story of a foreigner trying to fit in India.

Macdonald originally travels to India as a backpacker in her twenties where she is told by a fortune teller that she will eventually return to the country. Having been overwhelmed by India during her first visit, she never expects this to happen until her partner is sent to India for work over a decade later.

Holy Cow: An Indian Adventure will undoubtedly resonate with anybody that has travelled extensively through India before as Macdonald shares all of her experiences in the country and how she gets deep into the country’s culture.

Considered to be the late David Foster Wallace’s greatest work, this behemoth of a novel is set in a not so distant future of the United States, and mainly follows the Incendenza family. While it is almost impossible to summarise the plot of the 1,000+ page book, it deals with themes like addiction, mental illness, and everyday society.

Though the plot of Infinite Jest couldn’t be more different from Shantaram, both books somehow have similar styles and try to convey similar themes. Like Shantaram, Infinite Jest is a long read and there are times where there can be pages-long philosophical tangents. The plots are both extremely character-driven, with the main character’s main focus in both novels to be to make lasting human connections.

Shantaram is one of my favourite books of all time and while it can be difficult to recreate that magic in other books, there are plenty of great options if you’re searching for more books similar to Shantaram!

Are you looking for more books like Shantaram? What do you recommend? Let us know in the comments below! 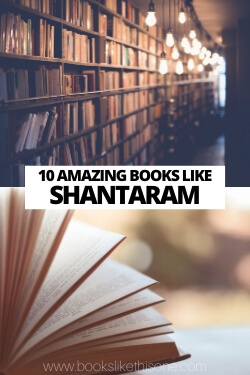