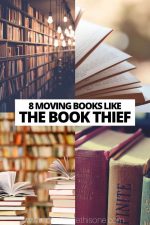 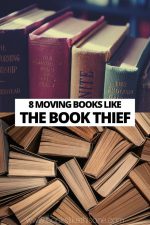 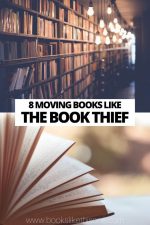 The Book Thief, written by the Australian author Markus Zusak, is undoubtedly one of the most unique historical novels that is set in Nazi Germany, making it challenging to find other books like The Book Thief.

It follows the story of a young German girl named Liesel who is sent to live with foster parents, Hans and Rosa, at the start of the novel. Her foster parents end up hiding a Jewish man named Max who forms a strong bond with Liesel after she begins to steal books that the Nazi party were planning on burning. What makes this book unique is that it is narrated by Death, which provides a haunting and unique perspective at what is going on on Earth. For readers who enjoyed this story, it can be difficult to find more books like The Book Thief due to the unique writing style that Zusak uses.

If you’re looking for books similar to The Book Thief because you enjoyed Zusak’s novel or because you saw the feature film released in 2013 starring Geoffery Rush, here are some book recommendations to help you find your next read.

The Diary of a Young Girl, by Anne Frank

The Diary of a Young Girl, by Anne Frank, also commonly known as Anne Frank’s Diary is undoubtedly one of the most famous books written in Nazi Germany.

Anne Frank was a teenage girl who went into hiding with her family and other Jewish families in a sealed-off room in the back of an office in Amsterdam. She was given a blank diary from her father, Otto, as a present for her thirteenth birthday and over the next two years began filling the pages covering everything from what life was like in hiding to the challenges of being a teenage girl. She was tragically captured by the Nazis in 1944 and died in a concentration camp.

The pages of her diary were found after the end of the war and given to her surviving father, Otto, who first published it in Dutch and it was then later translated to German, French and English. Anne Frank’s Diary is a great choice if you’re looking for more books like The Book Thief if you want to read a real-life experience of what it was like growing up in Nazi Germany as Jew.

The Boy in the Striped Pyjamas, by John Boyne is possibly the most similar choice if you’re looking for more books like The Book Thief. This is because it is also a fictional story that explores the impact that Nazi Germany had on German children and the effect of them forming a relationship with Jews.

The Boy in the Striped Pyjamas tells the story of Bruno, a 9-year-old German boy, whose father is promoted to lead a concentration camp, causing his family to relocate to be next to it. Bruno who is oblivious to what is going on around him ends up forming a relationship with a young Jewish boy named Shmuel one day when playing outside. The story then focuses on their relationship as they meet regularly on opposite sides of the concentration camp fence.

Similarly to The Book Thief, The Boy in the Striped Pyjamas was made into a feature film in 2008.

Man’s Search for Meaning, by Viktor Frankl was written shortly after the end of the Holocaust and explores the psychological impact that being in a concentration camp had on prisoners.

Frankl, who was a survivor of the Holocaust, splits the book into two parts. The first part focuses extensively on his experience as a prisoner as well as what he observed from other people in the concentration camp. The second part of the book delves into psychological theories that he developed from his observations.

While the second part might be less compelling if you’re not interested in psychology, the first part of Man’s Search for Meaning is a must-read if you’re after more books like The Book Thief and want to understand more about what day to day life was like for prisoners in a concentration camp.

If you’re looking to read more real-life experiences from Holocaust survivors, then you should most definitely read Night, by Elie Wiesel.

Wiesel was a teenager when he was imprisoned in Auschwitz and his autobiography describes in detail the horrors that he and those around him experienced. Wiesel also spends a lot of his memoir delving into his own philosophy and how it is impacted by the events that occurred.

The most recent edition, published in 2006, contains a preface by Elie’s wife, Marion, about Wiesel’s life’s work in ensuring the events of the Holocaust and other genocides were brought to the attention of new generations of people.

Published in 2018, over seventy years after the events described in the book, The Tattooist of Auschwitz by Heather Morris tells the story of Lale Sokolov, a Slovakian Jew, who was sent to Auschwitz and was assigned the job of tattooing other prisoners entering the camp.

During his time in Auschwitz, he meets Gita, a fellow prisoner with whom he falls in love and helps survive during their time in the camp. Shortly after the end of the war, Lale & Gita immigrated to Australia where he kept his history secret until Gita published away in 2003.

Morris’ debut book has received some critics who question the historical accuracy of her book. Regardless, The Tattooist of Auschwitz is a remarkably interesting read and worth adding to your list if you’re looking for more books like The Book Thief.

First They Killed My Father, by Loung Ung

Loung Ung was five years old when the Khmer Rouge took power in Cambodia and her remarkable book First They Killed My Father tells her harrowing story of her experience as a young girl trying to survive the regime.

During the Khmer Rouge’s rule of Cambodia, Ung and her family were constantly moving from village to village in order to survive and hide their former wealthy positions from the new government. Over the duration of her book, she is separated from her siblings and spends a significant amount of time training as a child soldier.

First They Killed My Father is a gripping read that, similarly to The Book Thief, highlights how atrocities are viewed from the eyes of children. Her story was made into a feature film directed and produced by Angelina Jolie in 2017.

Girl at War, by Sara Novic

Girl at War is the debut novel by Sara Novic which tells the story of Ana, first as a ten-year-old girl living in Zagreb following the breakout of the Yugoslav Wars and later as a university student who immigrated to the USA.

Novic writes in great detail about the Balkan wars and the impact that it has on Ana, a carefree girl, who is thrust suddenly into this world and eventually about how she manages to escape to the USA. Girl at War then later deals with what it is like to return back to Croatia a decade after the war.

Girl at War is another gripping read and a great choice for readers who are looking for more books like The Book Thief.

Maus, by Art Spiegelman is a unique book that tells the story of the Holocaust in the form of a graphic novel. Spiegelman depicts Jews as mice (hence the name of the title ‘Maus’ as it is the German word for mouse) and Germans as cats. The story is told through the eyes of a survivor of the Holocaust living in the USA in the 1970s.

Maus was originally published as comic strips in a magazine before it was eventually put together and published as a book. It has been widely critically acclaimed for its unique storytelling style and became the first graphic novel to win a Pultizer Prize in 1992.

The Book Thief is a uniquely written historical fiction book however there are several other books like The Book Thief that make for excellent choices if you’re looking for a similar read.

Are you looking for more books similar to The Book Thief? Are there any that you think should be on this list? Let us know in the comments below! 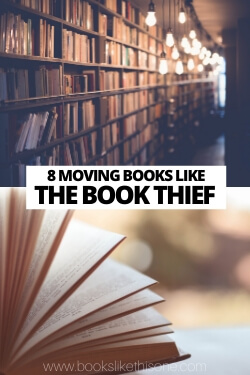